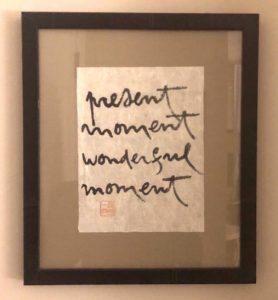 I read the book No Death, No Fear: Comforting Wisdom for Life after my father passed away.  The author was the Zen Master and spiritual leader Thich Nhat Hanh, who died this month. He was born in my mother’s central Vietnamese town of Hue.

I’m sad to hear that he died. I imagine that he approached his own death in the manner in which he described. In this book, Thay (Vietnamese name for teacher) explains that the idea of life and death is like a flame which manifests from the elements which are already there: oxygen in the air, the fuel of the match and then the strike. Life is continual. It is a wave on the ocean, part of the life beneath. There is no birth and no death.

I had the privilege to see him on his stop by New York City at the Beacon Theater. I remember eating my lunch mindfully and then walking around the block with him and the audience. One phrase has stayed with me and it was part of the lesson he shared before our walk together outside the theater.

The miracle is to walk on earth.

In the lobby I bought his brush paintings on rice paper with his words in lush black strokes. He said that as  you plant each foot and feel the ground against it, remember the miracle it is to be alive, to breathe, and to be present in that moment. The miracle is to walk on earth.

When he shared that watches would be available in the lobby if we would like to make a donation, I recall the uproar when he explained that the watch face had no numbers on it. Only the word–Now. When you look at your watch The Time is Now, he said to us with his slow and thoughtful smile.

I see the paintings with his strokes in my office every day. And I remember what a blessing it is to walk on this earth, to live in this moment, because Now is the only time we can live.

This peaceful man breathed the air for over 95 years; he wrote over 100 books in English and he touched much of humanity. His words and ideas are like the ocean, very much alive. 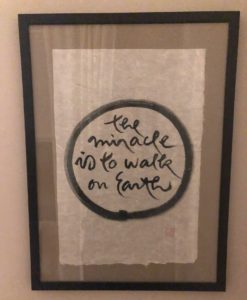 A letter and invitation at the link from the monks and nuns of Plum Village, France on the loss of their beloved teacher. 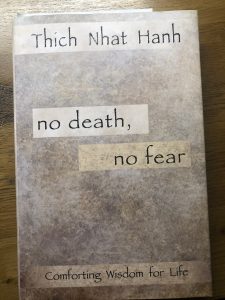 I’ve given the author’s books as gifts. A friend who lost her mother said this gave her great comfort.