What would Don Quixote do? Quixote on Families and Greatness

Don Quixote himself will answer this question, and I promise to relate such counsel as faithfully as this modern, wretched hand will permit. You may ask, “Who cares what Quixote thinks or does?”

The sane madman and the wise fool (Sancho Panza) are two of the most endearing characters in literature. And what better way is there to share one’s views than the romantic idealist and the illiterate farmer?

Miguel de Cervantes said in his prologue that he had little need to quote the greats and allude to their deeds to “amaze” readers with his education, erudition, and eloquence.  He was “disinclined to go hunting for authors to say for me what I know how to say without them.”

And by doing so, he wrote the first modern novel and changed the world. 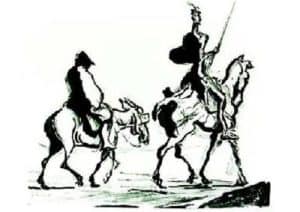 Sancho Panza on his donkey and Don Quixote on Rocinante

Cervantes published Don Quixote (Part I) in 1605, and it’s been four hundred years.  Consider that Shakespeare was barely a boy when Cervantes joined the Spanish regiment and was taken prisoner by the Barbary pirates in 1575.  Enslaved in captivity, he attempted several escapes and was not ransomed until 1580.

Cervantes was a man of arms, and he was a man of letters, the latter is indisputable as history has proven.  Here’s a writer who had lived.  With Cervantes, we are in good hands.

In Part II, Chapter VI, Don Quixote has a conversation with his niece who laments his poor health and equally poor financial station.  In an attempt to enlighten her, he pontificates on wealth and families.

What does Don Quixote think about families and greatness?

Look my dear friends: all the families in the world . . . can be reduced to four kinds, which are these:

1) those that had humble beginnings, and extended and grew until they attained greatness;  (an example is the Ottoman house, “springing from a humble, lowly herdsman, it has reached the heights where we contemplate it now”)

2) those that had splendid beginnings, and maintained this state and even now remain as they were at the outset; (examples of “many kings who have inherited their position and retain it without any expansion or contraction, being content to stay peacefully within the borders of their kingdoms”)

3) those that had splendid beginnings but tapered off, like a pyramid, after dwindling and decaying until they ended up in oblivion, like the tip of the pyramid, which compared with its base is nothing; (“thousands of examples; because all of the Pharaohs and Ptolemies of Egypt, all the Caesars of Rome . . . princes, monarchs and lords, all …. have tapered into nothingness “)

4) and all the others, the vast majority, that had neither a good beginning nor an acceptable middle, and will have the same anonymous end, the lineage of common, plebeian people.  (“Of the plebeian stock all I can say is that it only serves to swell the ranks of the living, and its achievements deserve no more fame or praise than that.”)

But what would Don Quixote do if he were wealthy?

Only families who show themselves to be great and illustrious are those that display these qualities in the virtue, wealth and generosity of their paterfamilias. . . .  the wealthy man who is not generous will be nothing but a miserly beggar; the owner of wealth is not made happy by owning it but by spending it, and not by spending it capriciously, but by knowing how to spend it well.

What does Don Quixote think of the poor gentleman?

The poor gentleman has no means of showing that he is a gentleman other than by his virtue: being affable, well-bred, courteous and considerate and solicitous; not proud, not arrogant, not a gossip and, above all charitable, because by cheerfully giving a pauper a couple of maravedis he will show himself to be as generous as the man who distributes alms to a fanfare of trumpets.

How would Don Quixote attain greatness?

There are two roads, my daughters, to riches and honour: one is letters, the other is arms. I myself am more for arms than letters, and, to judge from this inclination of mine, I must have been born under the influence of the planet Mars;  . . . knowing as I do, the countless toils that are part and parcel of knight-errantry, I also know the innumerable benefits that it brings.  And I know that the road of virtue is very narrow and the road of vice is broad and spacious.

Don Quixote finishes the conversation when his niece exclaims that he knows everything and can do anything despite her protests.

‘I can promise you, niece,’ Don Quixote replied, ‘that if thoughts of chivalry did not engage all my faculties, there would be nothing I would not make, no knick-knack I would not manufacture, in particular birdcages and toothpicks.’

I feel like I know Miguel Cervantes and he’d be the guest I’d suggest when asked whom I would invite to dinner if I could invite any writer in history.  Oh sure, there are others, like C.S. Lewis and Richard Mitchell, but I’m not sure I could get a table for four. 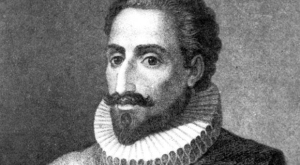 Cervantes performed that miracle of literature and reached out across the centuries to this reader; the characters brought on outbursts and teary-eyed laughing fits which compelled my family to shush and scold me.

Beyond the humor, the choreographed dance between imagination and reality, and the characters, this novel is a study in virtue and a treatise on life.  Spanish philologist Ciriaco Moron Arroyo comments that Cervantes was no relativist when it came to morals.  How refreshing this is after reading Gillian Flynn’s Gone Girl and Donna Tartt’s Goldfinch, both obsessed with the basest elements of  human nature.

If you believe Don Quixote, as far as families and greatness are concerned, it doesn’t matter whether you’re rich or poor or from a splendid family or plebian beginnings. Here was a radical perspective. Artists and writers were supported by the wealthy, but to lead a noble life, attain riches and honor from humble beginnings? Unheard of.

Cervantes struggled financially as a writer and knew only moderate success until he published Don Quixote just eleven years before his death.  Perhaps his simple beginnings and literary legacy are the best proof of the wisdom offered in this chapter.