Born to Run, and Fall – Oso and Athena – Big Runners

The cement gutter seemed to rise towards me after my foot caught on a perfectly fine stretch of road across from the Chevy dealer. It happened so slowly, the images were a series of stills. My center of gravity was beyond recovery and my legs were like drying pasta, hanging from my hips out of control. A few more steps before I was down . . . I hit the cement with my right hand, then left hand, and my left forearm smashed onto the curb; I rolled, tucked my head, and landed on my back side.

Sitting as I fell on the sidewalk, looking where I’d been running at a fuzzy street, I listened, but for what I’m not sure. A heartbeat? I heard voices from the grocery store down the road and noises from the dealer’s garage. The air was humid and heating up, almost 9:00 AM.

I was without phone or identification or dignity for that matter, but I was conscious. My hands were scuffed with dirt, sore. My forearm was banged up and my left toe, that damned left toe, that hurt. (I found out today that it’s broken.)

I sat like this until the daze lifted. My fifth mile would be a slow one, but maybe I should call it a day? My friend left a water bottle in her mailbox at the top of the hill. I was shaken from the fall, so I walked. I hadn’t fallen since my college track days, and then I had speed as an excuse.

Age reminds me of John Green when he said,”What a slut time is. She screws everybody.”

Mid-life carries stereotypes for a reason. Too bad I couldn’t find solace in a convertible car or a tour de monde. The randomness of DNA and a distinct set of experiences along with my own choices got me here, the path taken. Running is a metaphor for life and maybe life is a metaphor for running. Mid-life is the midpoint of the race, the turn-around point when it’s all too apparent that we’re running against the clock.

For the runners out there, take heed, you’re going to fall. A lot of you know this, but it took me by surprise. I thought I was careful. I cross train on a rowing machine instead of cycling because my last bike crash left my face looking like smashed eggplant. There are too many risks beyond my control. But running, how simple is that? One foot in front of the other, just shoes, the ground, you.

There are other factors. Fatigue, weight, conditioning, body mass, nutrition, and on.

My last and only marathon was Disney, a perfect starter race on a flat course with entertainment and thrills. I’ve gotten to thinking since then, could I move this heft any faster? When I left college I ran a few short races in the Clydesdale division, lovely title right? Real runners look like twiggy versions of humans, the suggested weight is twice one’s height, male or female. An elite runner at 5’7” or 67 inches would weigh in 134 pounds, subtract 10 pounds for a small frame or add 10 for a large frame. It’s simple physics and the data points prove it: a top 100 distance runner’s weight and height today is 124 pounds at 5’7″.  (Runner’s World, The Incredible Shrinking Marathoner) 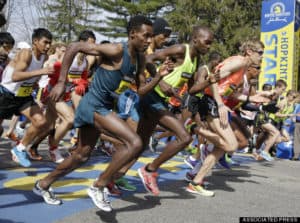 The marketing gurus, bless their thoughtfulness, renamed the Clydesdale division Athena for women. Clydedales are men who weigh over 200 pounds and Athenas are women over 150. I was a college sprinter at 5’9” and 160 pounds, granted a lot more muscle then. I’m within 10 pounds of that on any given day now, an Athena. So I included my weight when I registered for my next race, but I admit that if I lost 20 pounds it’d be hell of a lot easier on my joints and heart. 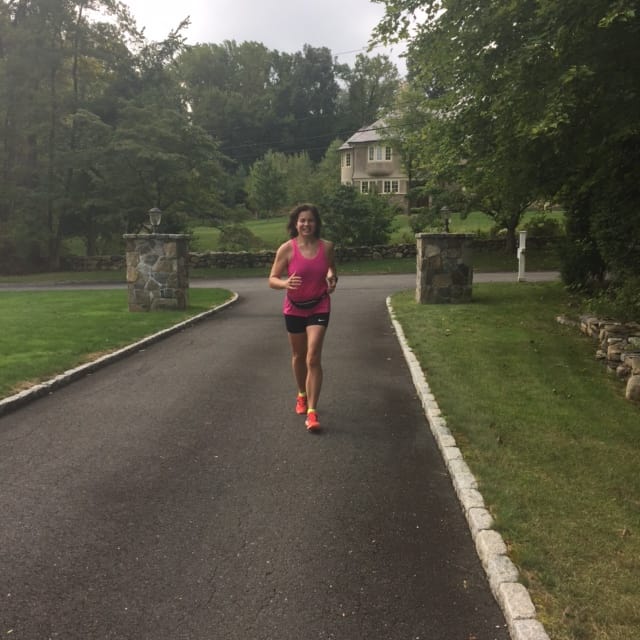 I’m coming in off my weekend LSD, Long Slow Distance, an “Athena” at 164 lbs.

Chris McDougall penned a bestseller in 2009 about running which changed a lot of attitudes, mine included. A large runner himself, McDougall wrote about the amazing super endurance of a hidden tribe, the Tarahumara, the same group he came to know over the course of his journey and who dubbed him Oso the bear for his size at 6’4” and 230 pounds. The tribe runs a race through the Copper Canyons which often takes days and hundreds of miles wearing nothing but thin sandals tied to their feet. They call themselves the Running People.

Research and evidence show that humans were meant to run, designed to run.

Leonardo da Vinci considered the human foot, with its fantastic weight-suspension system comprising one quarter of all the bones in the human body, “a masterpiece of engineering and a work of art.” ( McDougall, p. 156)

McDougall made a powerful and compelling argument for barefoot running. The market responded with an explosion of minimalist running shoes and lightweight trainers for runners who realized that the foot was designed to run, and cushioning technology may cause injuries.

As far back as 1976, Dr. Brand was pointing out that nearly every case in his waiting room – corns, bunions, hammertoes, flat feet, fallen arches – was nearly nonexistent in countries where most people go barefoot.” (177)

Before the invention of the cushioned shoe, runners through the ages had identical form: Jesse Owens, Roger Bannister, Frank Shorter, and even Emil Zatopek all ran with backs straight, knees bent, feet scratching back under their hips. ( p. 180)

Like many collegiate runners, I suffered and ran with foot injuries, changing to shoes with more cushioning, adding orthotics. As an Athena, I needed support. But a few years ago, I changed to a lightweight trainer and the pain has gone. The research made sense. And the Tarahumara, who’ve been around since before the Conquistadors, don’t wear cushioned shoes.

Another scientist said that the animal kingdom could be split into two categories: runners and walkers. Runners include horses and dogs and walkers pigs and chimps. But here’s what he learned. A nuchal ligament is a tendon designed to support and stabilize the head when running . Chimps don’t have a nuchal ligament. Pigs don’t either, but guess who does? Dogs, horses. And Humans. (220) 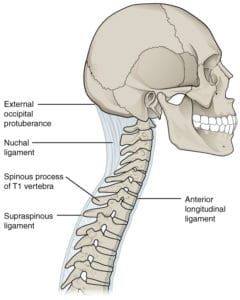 The nuchal ligament is a tendon-like structure that has developed independently in humans and other animals well adapted for running. (Wiki)

Humans are, you guessed it, born to run. That’s the title of the book, by the way. Born to Run. McDougall chronicles the “greatest race the world has never seen” between the modern world’s best ultra distance (100+ mile) runners and the Tarahumara Indians. You’ll have to read it to find out what happens. 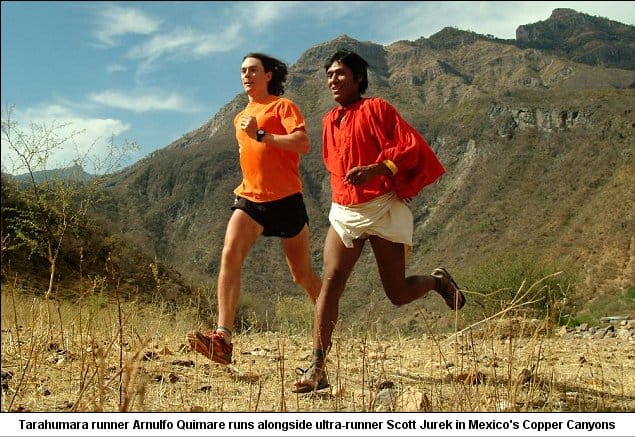 Notice the Huaraches or thin sandals

With the knowledge from this book as my companion, I stood up from the cement, dusted my hands off and began the trek uphill. We were meant to run, goddammit, born to run.

I kept my back straight, arms bent, and kicked my feet behind me, then ran the next six miles home. 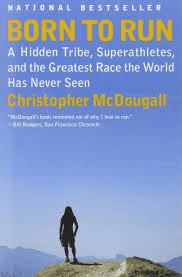