Quiet: the Power of Introverts – Susan Cain – in the Top 10 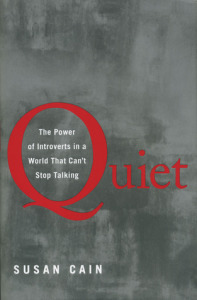 With her book, Susan Cain gave me a gift as lasting and substantial as any literary work I’ve read. Every now and then you read something that reaches you, touches you deeply in ways you could not imagine. Quiet does that for me.  Cain has transformed my thinking as well as my attitude and interactions with others.

I am an introvert. My husband says hermit is a better description and the irony is that he’s an introvert too. He bought this book and dropped it in front of me without saying a word.

How’s that for quiet action?

As proof of my own bias from societal influences, I bristled at the title. But now I know better.  Our culture perceives introverts in a negative vein and like the proverbial half-empty glass, an introvert is viewed as anti-social and taciturn. The very moniker of introvert is offered up as some kind of explanation for wayward behavior.

This book did wonders for me. Cain explained that introversion does not mean shyness and it’s the first time I understood the term, because the stereotype of an introvert as reticent, awkward, and withdrawn never made sense.  As a lawyer and graduate of Princeton and Harvard Law School, Cain wrote this treatise and it appeals to my analytical side.  She constructs a powerful argument using research from psychology and neuroscience and along the way, she shares poignant, funny, and thoughtful stories.

The volume of examples and ingrained institutional/societal bias against introversion is staggering.

So what does this mean for introverts? Good news.  Cain’s “Quiet Revolution” is growing and I’ve observed that personally in my local schools. [See reference in this Writing Primer]  Perhaps people will respect introverts when they understand them better. Collaboration has value, but many people do their best work alone.

If you’re not sure which camp you fall into, take this short quiz on Cain’s website [quiz link]; it’s deceptively simple and revealing.

I give this book my highest recommendation. If you’re an introvert, get the book. If you’re an extrovert, watch the TED talk [TED video link].  It might change you.

I don’t feel guilty when I decline social invitations. I love, need, thrive on solitude because it’s when I do my best thinking; I relish meaningful conversation with friends; I love a life of contemplation and reflection.

As Cain predicted, I have a newfound sense of entitlement to be myself.

Two quotes from the book

Most inventors and engineers I’ve met are like me – they’re shy and they live in their head.  They’re almost like artists. In fact, the very best of them are artists. And artists work best alone where they can control an invention’s design without a lot of other people designing it for marketing or some other committee.  I don’t believe anything really revolutionary has been invented by committee. If you’re that rare engineer who’s an inventor and also an artist, I’m going to give you some advice that might be hard to take. That advice is: Work alone. You’re going to best be able to design revolutionary products if you’re working on your own. Not on a committee. Not on a team.”  Stephen Wozniak (p.74)

When you’re told that you’re “in your head too much,” then make sure to answer, that there’s another word for such people: thinkers. (p. 7)