Why Read The Martian?

Here’s something to consider: girls reading science fiction, and more interesting, girls liking science fiction. The ladies in my book group met last night to discuss The Martian by Andy Weir. Yes, it’s a book. The movie came AFTER the book. 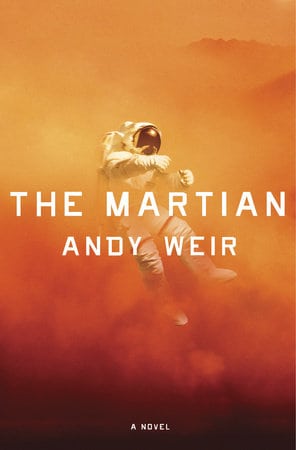 Andy Weir originally posted the story as a free serial on his website. Readers asked for a Kindle version, sales took off, and then it went into print.  Link to book.

The science is not only accurate, it’s accessible, even for non science types, girls or guys. You learn that a day on Mars is not a day. It’s 39 minutes longer, so a solar day on Mars is 24 hours and 39 minutes, and you read this on the book’s opening page, LOG ENTRY: SOL 6. What’s a Sol? The narrator gets to that, but right now he must tend to his gut wound and planetary abandonment.

You learn all sorts of cool stuff about the atmospheric pressure and composition on Mars and what humans need to live in space, like an oxygenator, a water reclaimer, an atmospheric regulator. And then there’s the food problem.

What do astronauts do in space? They conduct experiments in fields from physics to biology, so they can study the effects of space and microgravity. Our hero Mark Watney is not only a mechanical engineer, which comes in handy if you have to live alone on Mars, he’s a botanist. Food’s important, because it’s sort of like water and air, it’s hard to live without it.

Watney figures out how to grow crops on Mars. It’s messy because it involves dirt and bacteria and fertilizer and the conditions required to make things grow. Nothing grows on Mars by the way, so noodle on that for a moment. Fertilizer, where does one get that? Our favorite Martian is one resourceful dude. He writes in his log on SOL 14, “People have been using human waste as fertilizer for centuries. It’s even got a pleasant name: “night soil.””

You’re in for it now, biology, chemistry, physics, but it’s much better than classroom stuff because it’s real, at least for our hero, and it’s readable.

MARK WATNEY AND THE BUREAUCRACY

Everyone likes Watney. The guys in my house read the book too and kept taking it while I was still reading it. That’s a punishable offense by the way. But why did they want to read it so badly?

You like Watney and you root for him from page one. He’s a smart ass, yes, but he’s smart. And he does what he does with gusto. He’s grounded physically and he’s grounded emotionally, and he must fight to survive every day in a minus 80 degree F wasteland, not to mention he must deal with the bureaucracy that is NASA, Mission Control, Jet Propulsion Labs, and the public.

In the first transmission using the software from Pathfinder, Watney writes.

[11:29] WATNEY “Really looking forward to not dying. I want to make it clear it wasn’t the crew’s fault. What did they say when they found out I was alive? Also, “Hi, Mom!”

NASA scientist Venkat Kapoor informs him they did NOT tell the crew that Watney is alive. There are reasons for this, like things that come up in committees and discussions when members devise, or divine, answers to such problems. In this case, the decision involved emotional consideration of the crew whose commander chose to leave him on Mars, believing he was dead. Venkat also asks Watney about his “crops” and food rations. Here’s Watney’s response.

[11:52] WATNEY: The crops are potatoes, grown from the ones we were supposed to prepare for Thanksgiving. They’re doing great, but the available farmland isn’t enough for sustainability. I’ll run out of food around Sol 900. Also: Tell the crew I’m alive! What the f___ is wrong with you?

Here’s another typical Watney response to Kapoor’s submission, “They want to see if there were any avoidable mistakes that led to you being stranded.”

Venkat, tell the investigation committee they’ll have to do their witch hunt without me. And when they inevitably blame Commander Lewis, be advised I’ll publicly refute it. I’m sure the rest of the crew will do the same.
Also, please tell them that each and everyone one of their mothers is a prostitute.
—- Watney
PS: Their sisters, too.

The folks at Mission Control and NASA and the Lab do what they do, providing guidance from the best minds on Earth to solve Watney’s problems. This also means everything else associated with organizational culture: the committees and the politics and the public relations and the high-mindedness of officers who, when the time comes to approve a risky maneuver for the crew to be involved in the rescue, deny the rescue. The crew disobeys.

For those old enough, you may never forget just where you were 30 years ago on this day in history, January 28th.

Today in 1986 (30 years ago) the Space Shuttle Challenger blew up 73 seconds after it launched from Cape Canerval, FL, killing all 7 crew members, including a civilian teacher who was selected to be NASA’s teacher in space from more than 11,000 applicants.  The shuttle program began in 1972, and its first flight was the Columbia in 1981.  The Space Shuttles are the only winged manned spaceship to ever orbit and land.  NASA made 5 shuttles, which made a total of 135 manned launches.  Two of the shuttles, the Challenger and the Columbia, had catastrophic accidents each killing its 7 astronauts.  The last space shuttle flight was the Atlantis in 2011, after which the shuttle and America’s manned space program was officially ended. (The Daily Mollusk)

The book gets you thinking about space and NASA and just what happened to our space program. It’s been 47 years since we landed on the moon. That’s nearly five decades. Can we really make it to Mars?

What’s happening with our space program today? A team of six astronauts works on the International Space Station, ISS, conducting research and experiments. The ISS is an international collaborative program with Russia, Europe, Japan, and Canada. NASA’s Curiosity Rover landed on Mars in 2012 to determine the planet’s habitability.  (Link to NASA’s site on ISS)

But what about a manned mission to Mars? It’s possible, but will we do it? Experts are looking to the 2030s for this to happen. (Link to article on Nasa.gov)

In the book, the Chinese join the Save Watney mission because it’s the right thing to do. Meanwhile everyone is watching. Space travelers are like the great discoverers sailing beyond the edge of the world they knew, facing new problems in new places.

All the world watches Watney, because we’re concerned about more than ourselves. We’re a world united for a worthy cause: our humanity.

**  THE MOVIE, directed by Ridley Scott and starring Matt Damon, won two Golden Globes for best motion picture and best actor. It does not capture the personal humor and character development of the book; it does something different.  It shows us Mars and the technology required to live there. It skips some serious stuff that happens in the book, but it tells the story well enough and has a slightly different ending, which may even be better than the book. I recommend reading the book first, then watching the movie.