Toni Morrison’s Beloved: Should Books Get a Rating Like Movies?

Parents get upset about the book Beloved and here’s why.  In the first chapter, Toni Morrison wrote about the five men who were “so sick with the absence of women they had taken to calves.”

Go ahead.  Read it again; I had too.  My reading group picked this as part of our banned book theme and it didn’t take long to understand why the book was banned. 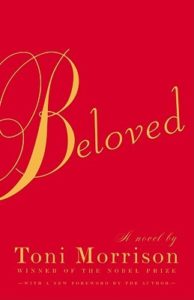 On the next page, if the reader wasn’t sure about the calf reference, Morrison listed each man’s name and explained further, “All in their twenties, minus women, f***ing cows, dreaming of rape, thrashing on pallets, rubbing their thighs and waiting for the new girl.”

The plot revolves around the protagonist Sethe’s home, haunted by her dead baby Beloved, and the traumatic lives of former slaves after the Civil War.  As a slave, Sethe had escaped from Kentucky across the Ohio River into free Cincinnati, but the Fugitive Act of 1850 allowed owners to recover their slaves

The horrors of life pop up throughout the book as matters of fact, ugly realities of the world of slavery. And the pivotal event involved infanticide, the fugitive Sethe’s escape and desperate act to thwart the slave catchers.  It was brutal and graphic.  She saw the schoolteacher, the new master who treated slaves as animals, and she “recognized [his] hat, and split to the woodshed to kill her children.” (Beloved, 186).  The murder weapon was what was there, a handsaw.

This story was based on a true account of the slave Margaret Garner who murdered her “two year old daughter with a butcher knife rather than see her returned to slavery.” (Wiki). 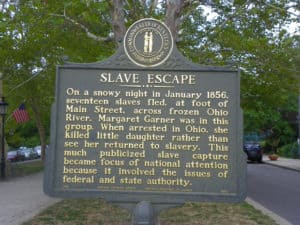 The historical setting, the beautiful language, tragic events, and the rich narrative voices make this the literature teachers love, a popular choice for Advanced Placement English in high school. The course description does not require this book, though Toni Morrison is listed along with 60+ “Representative Authors” (Link, p 60) like Willa Cather and Mark Twain.

The reading is tough.  Every sentence is packed with sensory information and layers of meaning.  Morrison moves back and forth in time, confuses the reader, distorts the story, and changes voices.

It’s hard to imagine a teen reading this, because I know I would have missed a lot at that age. Yet difficult reads can be rewarding and the writing is at times immediate, beautiful, heart-wrenching.

And my girl come home.  Now I can look at things again because she’s here to see them too. After the shed, I stopped. Now, in the morning, when I light the fire I mean to look out the window to see what the sun is doing to the day. Does it hit the pump handle first or the spigot? See if the grass is gray-green or brown or what. Now I know why baby Suggs pondered color her last years. She never had time to see, let alone enjoy it before. (Beloved, 237).

Color, like beauty, is a rare joy in such a dark, dreary world. The characters are violated and mutilated, not just physically but emotionally.

This is a work of dramatic fiction which portrays the emotional and psychological trauma of being enslaved.  Inspired by a true story, Beloved is a supernatural tale with numerous horrific events. This is not realistic fiction, though readers may confuse it with history.  They are different.

As compelling as this may be, students of history would be better served to understand slavery from the slaves themselves, and read their first hand accounts. An example is the  ex-slave narratives from this period (link)  (1850-1920) in Ohio, documented in the Library of Congress by the Federal Writer’s Project.  Little compares to what Morrison wrote about, though there’s no doubt the horrors she described occurred.

If and when my teen reads Beloved, I will talk with her about it.

But maybe books should be rated like movies.  Even games have ratings:  Uno, 7 and up; Axis and Allies, 13-15.   Common Sense Media rates books, movies, and games.  Here’s what is listed about Beloved:

Parents need to know that this Pulitzer Prize-winning novel is on many high school required reading lists because it’s a classic that will leave a lasting imprint on readers. It’s true that Beloved is the 26th book on the American Library Association’s Top 100 Banned/Challenged Books for 2000-2009 and has been challenged for its violence, sexuality, and more: It features a gritty infanticide, racial language, horrific sexual assaults, and even references to sex with animals. But teens are mature enough to handle the challenges this book presents. At this age they can decide for themselves what they think about disturbing personal and historical events.  Beloved is a beautiful, powerful book that will help all readers learn about the horrors of slavery — and leave them thinking about what it means to be a strong, heroic, or moral person.  (Click here to see ratings at Common Sense Media)

The ratings only go up to Age 17 and there are several which list, “Not for kids” along with notes.  If Beloved earns a 4 and 3, I wonder what it would take to receive a 5 out of 5 rating?

If books were rated like movies, Beloved should be rated R because it requires adult supervision for readers under 17. Not surprisingly, the movie with Oprah Winfrey and Danny Glover is rated R.

Beloved was published in 1987 and won the Pulitzer Prize for fiction the following year.