Running With the Marines – the 40th Marine Corps Marathon 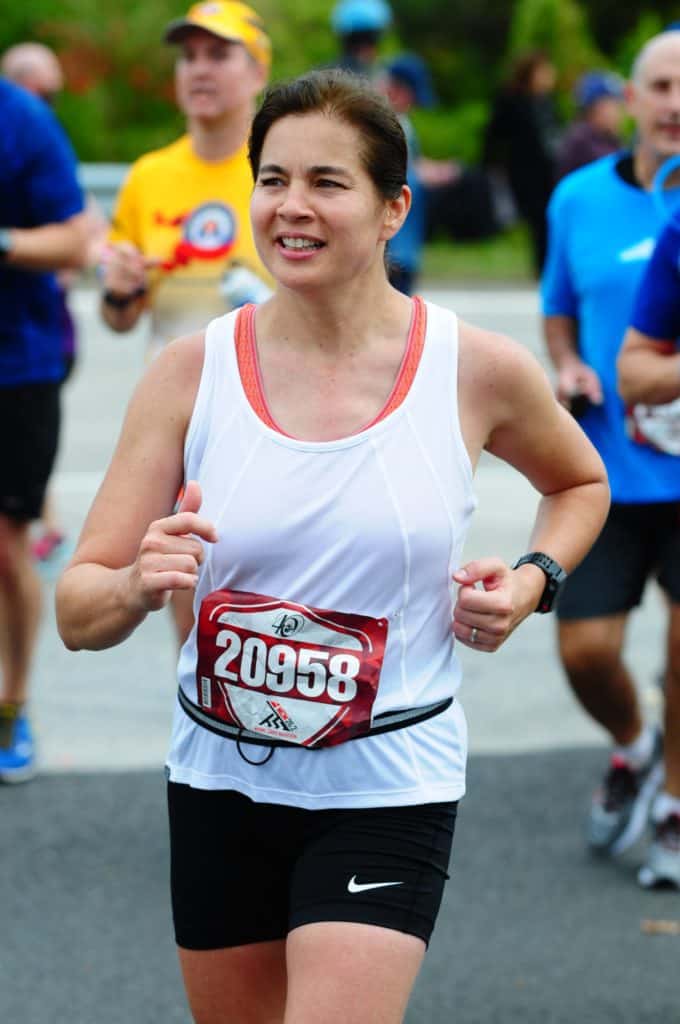 The 40th Marine Corps Marathon may well be my first and last time running around Washington, D.C., but oh what an event it was.  Four days later the race is with me still, the image of double amputees on handcycles, veterans running on prosthetic legs, photo placards of the fallen on the blue mile, and the less inspirational but more immediate sensation in the quads, calves, and hamstrings.

The Marine Corps Marathon or MCM is one of the largest in the world, selling out in hours, some 30,000 runners with as many if not more spectators along the course, crowding M Street in Georgetown, stretched along the Mall and the monuments, sharing banners, handouts, cowbells, and cheers.

FUN ON THE RUN

Humor was in ample supply with signs just for Washington. 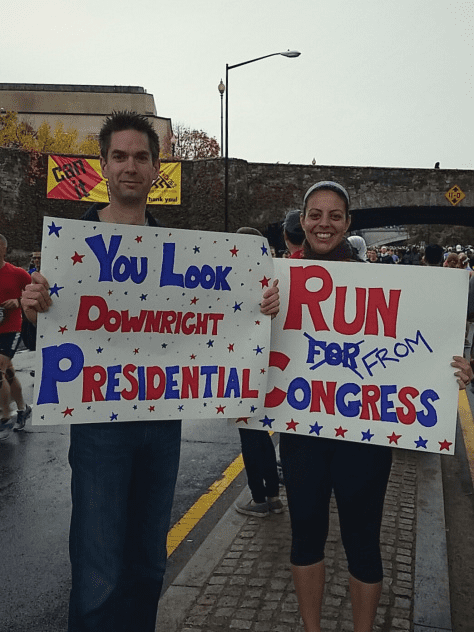 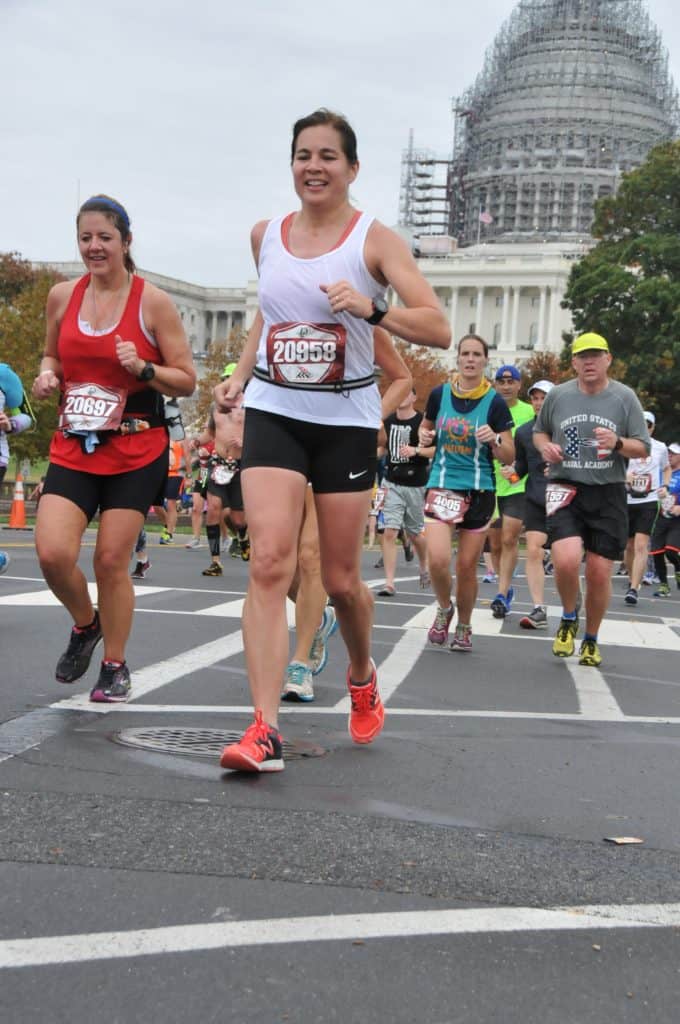 Taking the advice and running from Congress, mile 19 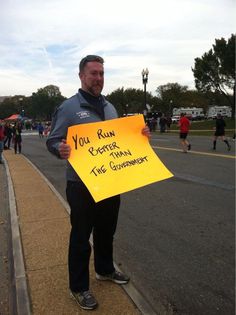 You run better than our government.

Bathroom humor appeals to this group because running is not just mechanical, but biological. On the metro escalator, two guys mumbled about “gastric distress” and “the trots” with equal parts amusement and fear. As any distance runner will admit, there’s a reason for a start lined with hundreds of porta-johns. Men heeded nature’s call along Rock Creek Park because they have the anatomical advantage. Women had fewer choices, so for us bathroom visits required planning and time.

Toenails are for sissies

Show us your nipple guards!

I woke at 5:00 AM, got off the metro at Pentagon station around 630 AM, skipped the lines at the first toilets, and joined thousands at the entrance, a sea of heads in every direction. I put on my plastic poncho, finished my drink, and ate a granola bar. Folks debated the cause for the hold-up. Former MCM runners said this had never happened before.

I watched the drizzle against the stadium lights and listened to everyone grumbling. Close to an hour later, we broke loose near a wall of defunct metal detectors which had been overrun. Heightened security measures appeared to have caused the delay.

An aircraft flyby overhead got the crowd cheering and skydivers jumped with the American flag. As much as things change, they stay the same, especially in the armed forces. Hurry up and wait, but you’re never far from a reminder that you are serving something bigger than yourself.

The sky was gray with light rain, and the temperature was breaking into the 60s. T-shirts, ponchos, and jackets lined the road towards the inflatable red arch that marked the start. I crossed 14 minutes after the gun went off and set my Garmin watch. 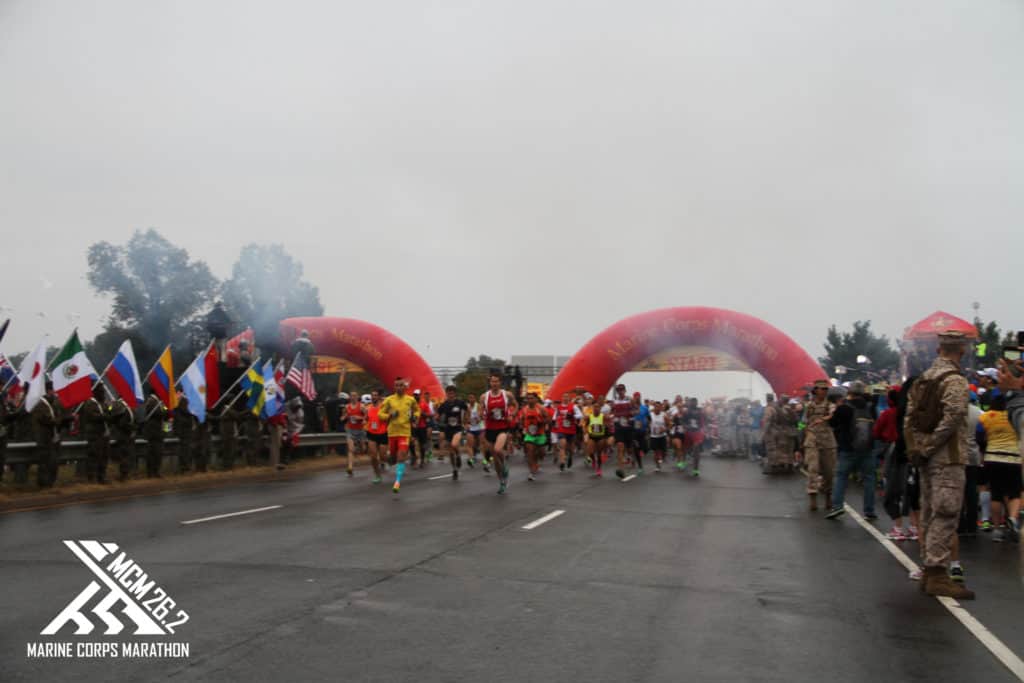 Start slow. Words of advice from Peggy, a veteran runner and friend, stuck in my head. I felt OK, damp but not cold.  I jogged along Arlington National Cemetery and slightly uphill into Rosslyn, Virginia.

WHAT IT MEANS TO SERVE

Marines worked security, the water stations, and directed the flow of runners throughout the course. Fathers, mothers, sisters, brothers, daughters, sons and friends ran with photos of their fallen on their backs. Buzz cuts were the order of the day, for participants and volunteers and the marines working the event. Save for Rock Creek, spectators spanned the course, children and adults and seniors holding hands out for high fives and cheering on runners.

The “wear blue mile” on Hains Point was solemn and sobering, the first half of it filled with placards of fallen service members, the second half with flags held by volunteers row on row in silent respect. I choke up now thinking of it, the youthful faces, the uniforms, fellow graduates from West Point and a face I recognized as First Lieutenant Emily Perez, track star and army officer who was the first female West Point graduate to die in the Iraq War and the first female African American officer to die in combat. (Wiki link). 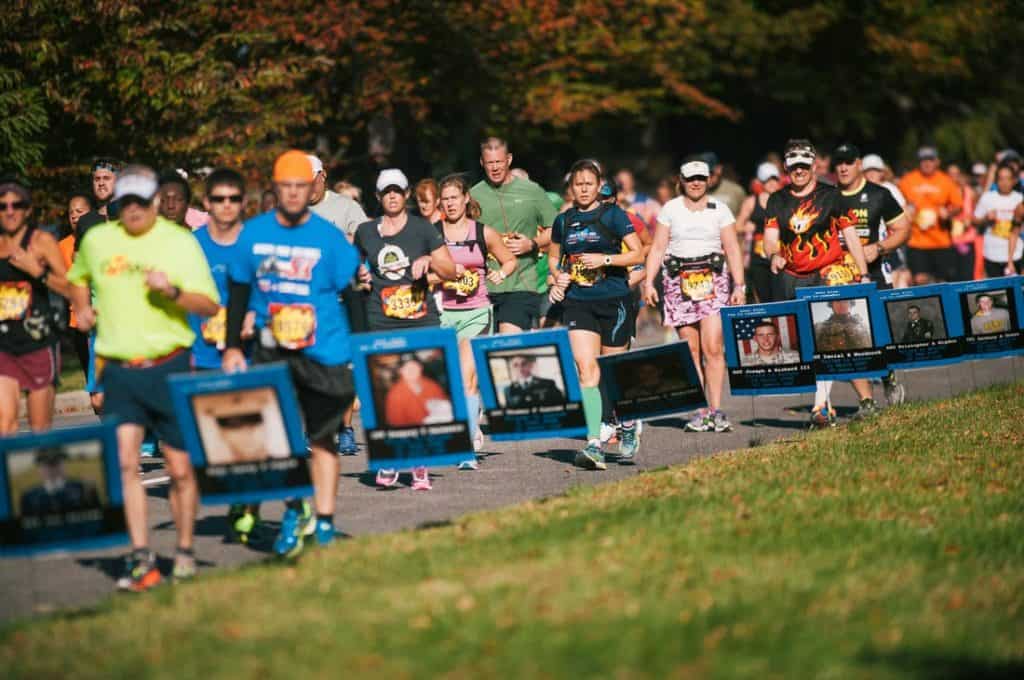 Part of the Blue Mile to remember the fallen

An old soldier jogged with me as we steadied our eyes left on these men and women, seeing how young they were. He told me his mother was a decoder in WWII, 97 years old now. I asked if she was a WAC, part of the Women’s Army Corps. She was.

On Kutz Bridge along the tidal basin, a young voice said, “Go Army, Ma’am!”, reacting to my West Point running singlet. A broad smile shone from beneath a digital camouflage cap. A senior or firstie currently at West Point, Cadet Coe was running for a fallen service member as part of Team Red White and Blue, whose mission is “to enrich the lives of America’s veterans by connecting them to their community through physical and social activity.” (TRWB Link)

The MCM has a rich military history. Colonel Jim Fowler started the race in 1975 after the Vietnam War to increase morale and goodwill towards the military and it was that same year my father sent us home from Vietnam, 40 years ago. The marines rescued my father from the American embassy and he left on the last helicopter with Ambassador Graham Martin. At the end of his life, on the day my father took his last breath, a policeman and former marine stood by as they took his body from my house.

That’s the kind of race it was for me.

TRAINING TO THE FINISH

I trained for eleven weeks but fell and injured myself in week five. I cut back on runs, cross trained, and rested, because I was determined to run it. My legs began to give around mile 16, but my family caught sight of me on the Mall, the children sprinting along the road, darting in and out of fans, giving me high fives and following me.  Their energy lifted my spirits and helped me to the bridge at mile 20. 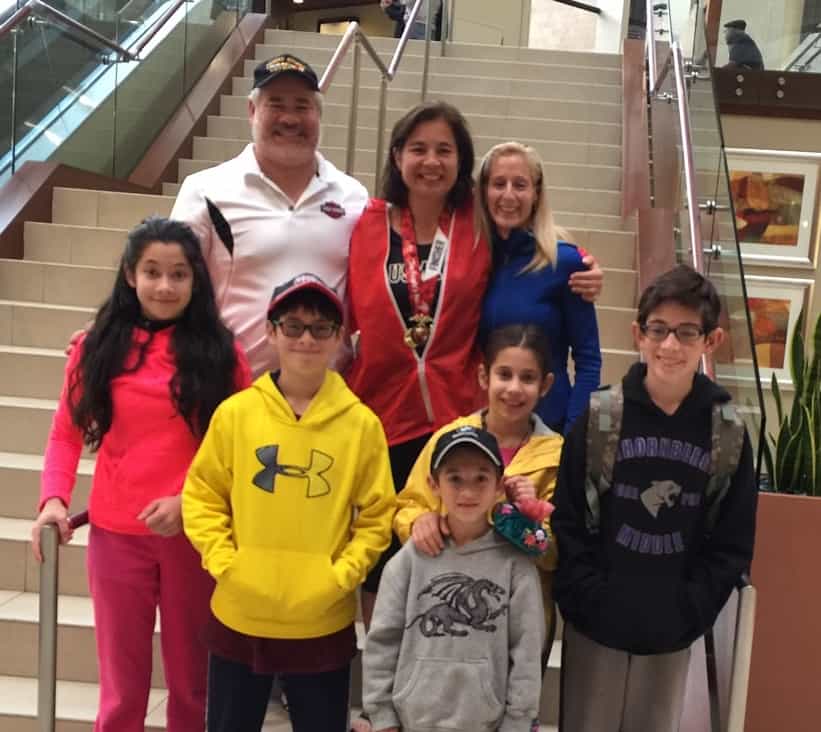 My brother’s children spotted me and followed me along the Mall with my children.

I made it to the 14th Street Bridge in good time. You have to BEAT THE BRIDGE.

Runners have to make it by 1:15 PM because they open the bridge to traffic and close it to runners. My quad and both calves balled into cramps every time I tried to run.  I stretched on the guard rail with multitudes of others.  I got all sorts of encouragement through Crystal City, but at mile 25 a friend jogged up and said hello.

Dave’s stationed at Ft. Bragg and just visited West Point with his son who is considering an army career. We talked about old friends and we were almost at the finish. He said he watched Army beat Bucknell and I was happy and jealous since I missed that game.

I forgot my pain for that mile and I thank him for that. He said he was cramping too and hadn’t trained for the race!  Oorah!

The bleachers and both sides of the finish were packed with walls of family and spectators and veterans and marines. I finished.

The marine saluted me and I returned his salute, then he placed a medal around my neck. I thanked him and the marines for saving my dad in Vietnam and for being there in the end for him, and for us all. 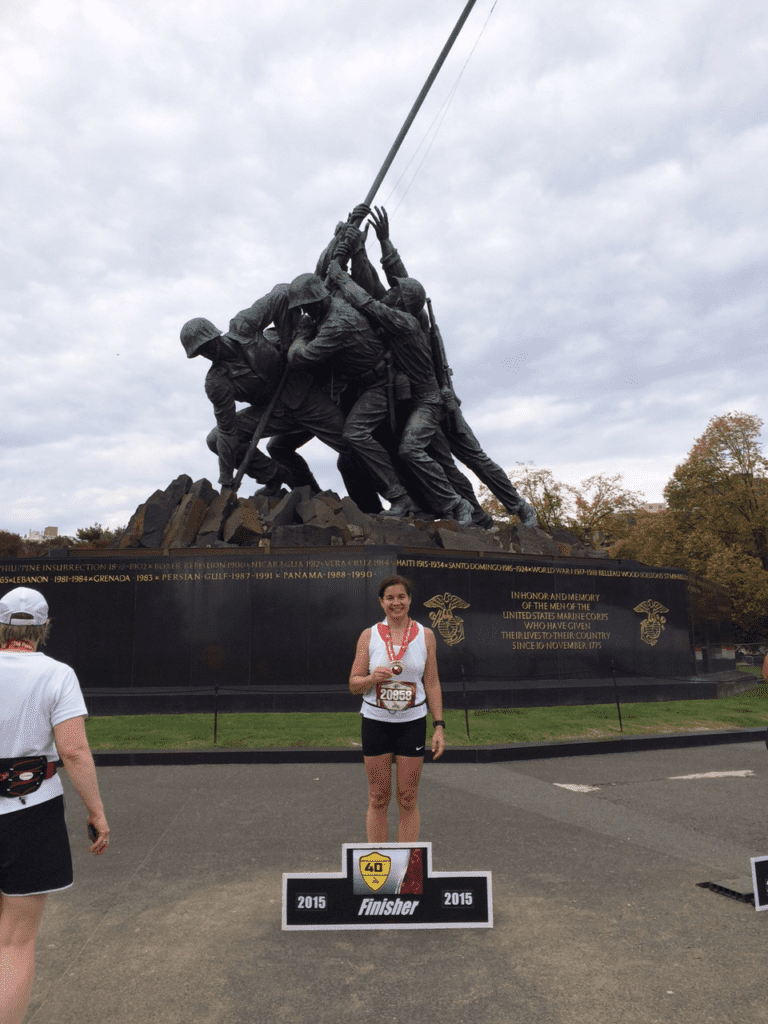 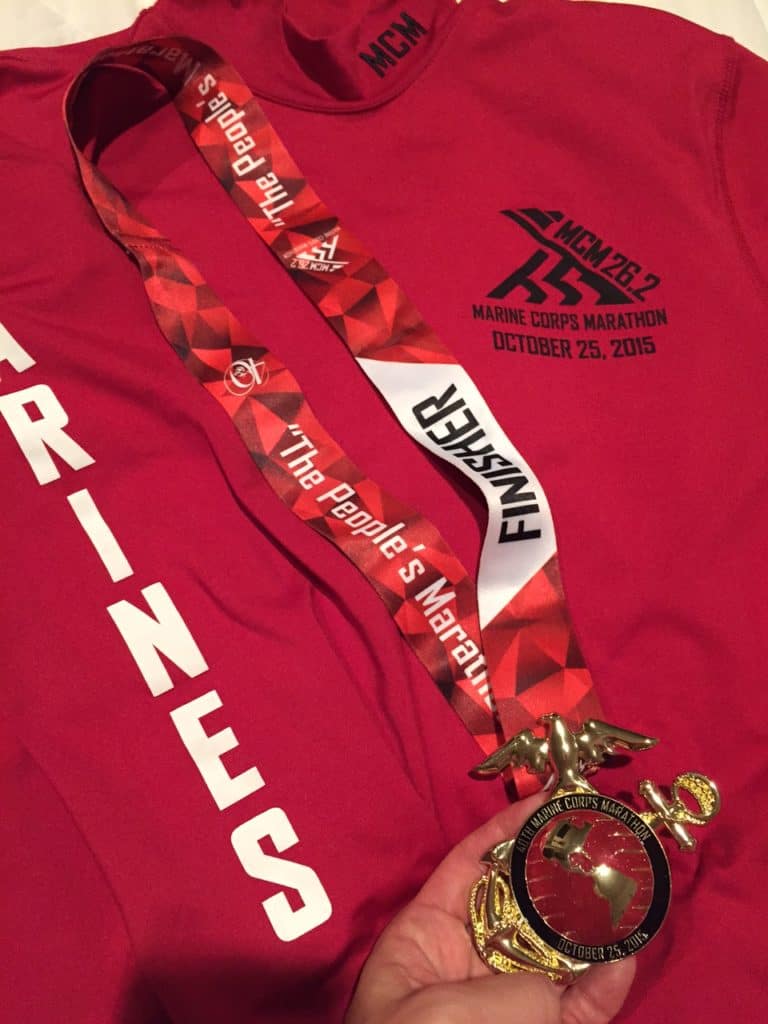 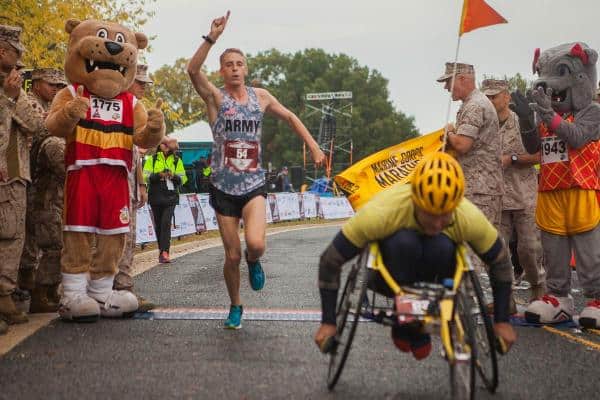