I saw the movie this weekend and as a veteran, I found it a powerful and honest portrayal of one man’s experience. Clint Eastwood shoots the scenes from Chris Kyle’s life, verb intended; there are parallels.  Kyle shoots for a living too, or shot for a living.  The  US Navy SEAL has been dubbed America’s deadliest marksman with 160 confirmed kills in four tours, but the more probable number is over 250.

The film is based on Kyle’s best selling book American Sniper: the Autobiography of the Most Lethal Sniper in U.S. Military History.

We planned to watch the movie in Wilton Connecticut’s Bow Tie theater at 7:00 PM.  As usual, we left the house to arrive in time for the movie, buy popcorn, and find a seat during the previews.

That was a mistake. 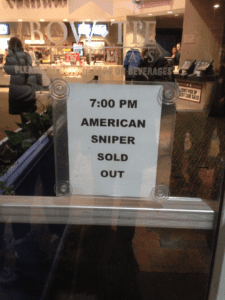 Other frustrated people walked away, some searched on their phones, and one couple said, “We got tickets on Fandango for Danbury.”  They were being helpful but that was farther than we wanted to go.  We checked closer theaters and the next showing was 8:15 PM in Darien, so we hopped in the car and headed south.  The cashier said there were still some tickets left when we purchased ours at 7:23 PM.  They would open the theater at 7:50 for seating.  We grabbed some coffee next door and came back to find that 25 minutes before the film, a line had formed almost reaching the door.  We joined those waiting so we could find seats together.

The showing in Darien also sold out.  The movie was released January 16 over Martin Luther King weekend and this was the second weekend.

The Oscar nominated film has sold over $200 million in just two weekends, almost as much as all the other films currently playing combined. It also broke the record for the highest ever January opening, generating $90.2 million in the first weekend. Worldwide sales are close to $250 million. (Source Telegraph link).

This has some people up in arms and the pundits and naysayers and anti-American celebrities in a tizzy.  They are a minority, but a vocal one who holds the reins on much of the media.

Listening to the banter is amusing.  Check it out for yourself:  here’s the latest between Howard Dean and Gary Sinise.

On Friday’s “Real Time With Bill Maher,” Howard Dean said there was maybe “a lot of intersection” between people seeing Clint Eastwood’s “American Sniper” and members of the Tea Party.

“There’s a lot of anger in this country. And the people who go see this movie are people who are very angry,” Dean said about the film, which focuses on the life of Chris Kyle, a deceased Navy SEAL who has been called the deadliest sniper in U.S. military history. “This guy basically says, ‘I’m going to fight on your side.’ They bite for it.”

Dean’s comments didn’t sit well with many conservatives, including Gary Sinise. On Monday, the actor posted a rebuttal to Dean that called out the former governor for making “stupid blanket statements.”

“I saw ‘American Sniper’ and would not consider myself to be an angry person. You certainly have a right to make stupid blanket statements, suggesting that all people who see this film are angry, but how is that helpful sir?” Sinise wrote on his WhoSay page. “Do you also suggest that everyone at Warner Brothers is angry because they released the film? That Clint Eastwood, Jason Hall, Bradley Cooper, Sienna Miller and the rest of the cast and crew are angry because they made the film? Chris Kyle’s story deserved to be told. It tells a story of the stress that multiple deployments have on one military family, a family representative of thousands of military families. It helps to communicate the toll that the war on terror has taken on our defenders. Defenders and families who need our support. I will admit that perhaps somewhere among the masses of people who are going to see the film there may be a few that might have some anger or have been angry at some point in their lives, but, with all due respect, what the hell are you talking about?” (Huffington Post)

This is just a taste of the outrage over Sniper’s success. I’ve listened to an NPR interview, read SLATE’s review, and Michael Moore’s comments.

Always insightful into his warped mind and sometimes entertaining, Michael Moore tweeted, “My uncle [was] killed by sniper in WW2. We were taught snipers were cowards. Will shoot you in the back. Snipers aren’t heroes. And invaders are worse.”

Messrs. Dean and Moore, you sound angry and upset and it’s understandable why.  You don’t get it.  You are watching your narrative of the War on Terror slip away from you.  If you don’t like the movie, stay home.

And Mr. Moore, as you tweeted, your uncle served and died for his country and I can’t imagine he would be proud of you or your comments.  My uncles have served their countries, both the U.S. and Vietnam, and I have also had the privilege to serve, as has my husband, our brothers on both sides of the family and my sister-in-law.  I challenge you to say in person, that a sniper is a coward to a US Navy SEAL. I trust you will get what you deserve.

The right and proper response to this movie and this man’s life is the one I experienced in the theater this weekend:  silence, humility, and gratitude.  Anger at the savage acts committed by the enemy is also understandable, but not the aim of this film.  Much to the pundits’ dismay, Kyle and Eastwood did not attempt to tell a tale about the Muslim point of view or the history of tribal conflict and religious strife in the region.

This is Kyle’s story and Eastwood tells it, fairly true to the book, warts and all.  The personal toll, the toll on marriage, the family, and the man are all too real and shown with expert Eastwood skill.

Eastwood has stayed at a distance from the debate, but he did discuss the film during an event this past weekend. The director noted that “American Sniper” had “anti-war” values at its core because of how it depicts Kyle’s struggles with post-traumatic stress disorder. Eastwood had earlier said the film wasn’t political in nature.  (Huffington Post)

While the left-wing fringe in our society reacts predictably, the American people are voting with their feet.  Well done Mr. Eastwood. 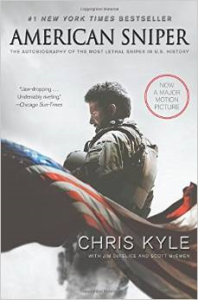 Link to the book