Go Set a Watchman by Harper Lee – a Reader’s Guide 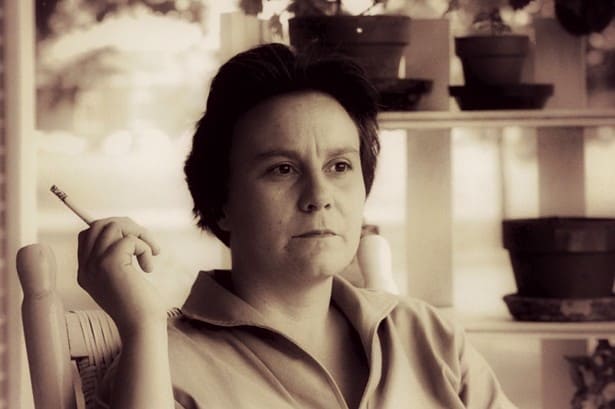 Nelle Harper Lee at her parents’ home in Monroeville, Alabama in 1961

What modern classic makes #4 on the banned book list?

It’s on 8th grade reading lists around the country. The author’s ‘new’ novel was released this summer and stirred up a controversy, maybe because Harper Collins made historic sales of more than 1.1 million copies in the first week.

To Kill A Mockingbird by Harper Lee is #4 on the Banned and Challenged Classics List ( see list) with the most recent objection in 2009 for language including racial slurs. (ALA List of challenges below). Since its publication in 1960, the book has been challenged by schools and parents and the NAACP, for profanity, sexual content, racial themes and epithets.

Yet To Kill a Mockingbird is often considered the best novel of the 20th century. Why? The humor, the characters, the plot, the theme, the first person narrative of Scout Finch, just one of literature’s memorable personalities from this novel. Who hasn’t heard of Boo Radley? Or Atticus Finch?

Readers believe in them, they seem three dimensional and they have to deal with some ugly stuff in the Deep South of the 1930s: a trial of a black man accused of raping a white woman.

So the world’s been waiting for Lee’s second novel for decades, almost given up on that possibility because of her reclusive nature. Was Mockingbird a one hit wonder? The answer to that is yes, and no.

The inside jacket flap of Go Set a Watchman has this inscription.

Misleading? It’s the literary event of the century about the novel of the last century. Scout is twenty years older and returns to Maycomb, Alabama, a fictional version of Lee’s hometown of Monroeville. Scout goes by her Christian name Jean Louise and things have changed.

Recommendations for the Reader (and for Book Club)

If you haven’t read Mockingbird since 8th grade, read it again. You will laugh out loud at Scout’s voice and Maycomb. You may even cry. It’s touching and authentic. Then read Go Set a Watchman. Scout is a child in Mockingbird and an adult in Watchman, a book which needs, demands, foreknowledge of setting, characters, and plot. Chronologically it’s the correct order and you will experience Lee’s exceptional writing as the world did with Mockingbird first.

Skip the reviews and the hullabaloo and decide for yourself. Consider both books, because you will need the context. Here’s a simple guide for analysis and review. 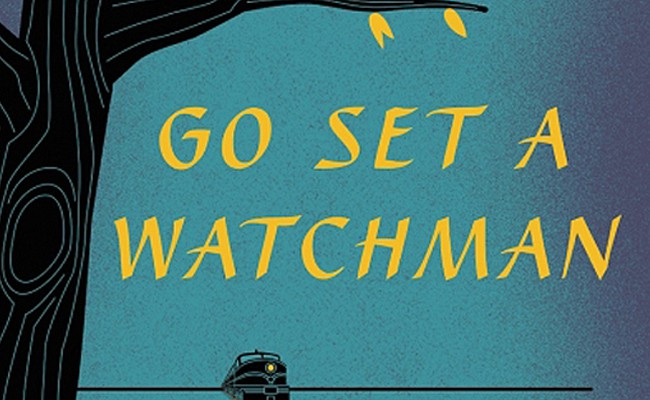 Why We Need Go Set a Watchman

I read the books in September, Mockingbird for the third time. Avoiding reviews, press coverage and feedback was nearly impossible. And I almost made it.

At the Verizon store earlier last month, a slim spectacled senior nodded when he saw the book in my hand. He said it was heartbreaking. My eyes went wide and he took that as interest to hear more. He continued, “Atticus. He’s changed. It’s sad.” He shook his head. I asked if he read it, which he did NOT, but he read the reviews.

So much for making up my own mind. With this well-meaning declaration clouding my view, I finished the novel, intent on giving it a fair, unbiased shake. Now, I’ll give you my take too.

Yes, Atticus falls from grace in Watchman and this revelation is a pivotal part of Lee’s storyline. He is not the ideal figure and saintly lawyer the world came to know in Mockingbird. I will let readers discover why. But the storyline here is titular and when Scout struggles to reconcile her father’s flaws, her Uncle recalls the bible passage the minister shared, 21st chapter of Isaiah, verse 6.

For thus hath the Lord said unto me,

Go, set a watchman, let him declare what he seeth.

If you know your scripture, then you might know the reference. I had to check to find out what the watchman saw. “Babylon has fallen! All the images of its gods lie shattered on the ground.”

Uncle Jack explains the shock and frustration about Atticus, that Scout has become her own person and that “every man’s watchman, is his conscience. There is no such thing as collective conscious.” (Chapter 18, p. 265)

What child does not see her father as a god of sorts, all knowing, good, loving, moral, and just? When and why does that change? There’s the watchman waiting, looking, seeing. Babylon falls. Atticus falls; he is flawed and so are we, society, even 55 years later.

Here’s what else I learned from Watchman. Flashes of Lee’s genius light up the pages and provide the rich foundation and setting for what became her masterpiece, To Kill a Mockingbird.

Her father said it took five years to learn law after one left law school: one practiced economy for two years, learned Albama Pleading for two more, reread the Bible and Shakespeare for the fifth. Then one was fully equipped to hold on under any conditions. (Go Set a Watchman, Chapter 2, p. 34)

[Jem, Dill, and Scout] listened to messages of the Reverend James Edward Moorehead, a renowned speaker from north Georgia. At least that is what they were told; they understood little of what he said except his observations on hell. Hell was and would always be as far as she was concerned, a lake of fire exactly the size of Maycomb, Alabama, surrounded by a brick wall two hundred feet high. Sinners were pitchforked over this wall by Satan, and they simmered throughout eternity in a sort of broth of liquid sulfur. (Go Set a Watchman, Chapter 5, p. 61)

Go Set a Watchman will not be the novel of this century, but it was nice to return to Maycomb with Scout as an adult, to see the town more clearly. The change in Atticus didn’t surprise me, because Mockingbird was written through the eyes of a child.

Atticus is prone to err; he is human. And Harper Lee, the stand-out writer of the 20th century, the creator of a powerful iconic masterpiece in literature, after reading this first novel, we see how Lee grew as a writer as well, and that she too is human.

To Kill a Mockingbird, by Harper Lee