The Republican debates have made history with 23 some million viewers, just north of the average NFL football game at 19 million! Americans are concerned about this upcoming presidential election, or at least as much as their fantasy football league. This is progress when you consider that the latter is the pursuit of pleasure and the former the antidote to pain.

The candidates have a surprising lack of military experience, with the exception of Lindsey Graham and democratic candidate Jim Webb, both of whom are on the margins of the election. Rick Perry flew C-130s in the Air Force, but dropped out after the first debate. Of course a president does not need to serve in the armed forces to be Commander-in-Chief, but it helps. Of our 43 presidents, 31 have military service. Think of that for a moment. Did you know this fact?

Three quarters of our nation’s presidents have served. 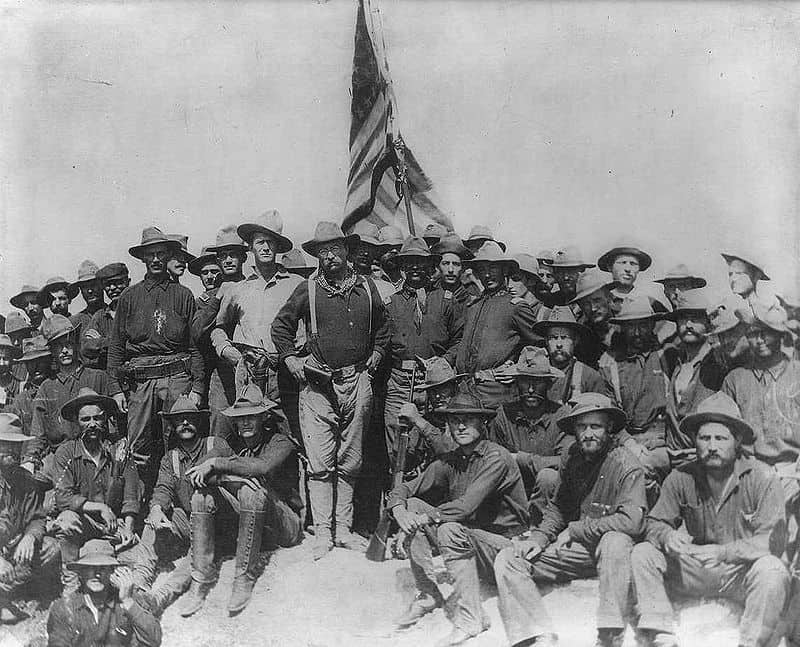 I’ve given some thought to this and wondered what the illustrious Don Quixote might say. In troubling times, the wise madman’s insights provide a welcome perspective. Here, in his own words, Quixote discussed the profession of arms. (Chapter XXXVIII, Part I)

…let us now see if the soldier is any richer [than the student]. And we shall observe that he is the very poorest of the poor, because he depends on his paltry pay, which he receives late or not at all, or on what he can loot at grave risk to his life and conscience.

He is often all too aware of the inclemency of heaven when he is out in the open field with nothing to warm him but his breath . . .

…how many men have been rewarded by war, compared with all those who have perished in it? You will have to reply that there is no comparison, and there is no counting those who died, while those alive and rewarded can be reckoned in three figures. It is the very opposite with men of letters, because their salaries, let alone the payments on the side, they can make ends meet well enough. So although the soldier’s hardships are greater, his reward is smaller.  (U.S. War deaths 1.3 Million – link)

.. letters say that arms could not exist without them, because war too has its laws and is subject to them, and laws are the province of men of letters. To which arms reply that laws could not exist without them, because arms are responsible for defending nations, preserving kingdoms, guarding cities, keeping highways safe, clearing seas of pirates; and in short if it were not for arms, all states, kingdoms, monarchies, cities and journeys over land and seas would be subject to the cruelty and turmoil that war brings with it…

And it is a proven truth that what costs the most is and should be most valued. To become eminent in letters costs time, sleepless nights, hunger, nakedness, dizzy spells, indigestion … to become a good soldier costs everything that it costs to be a student to such a greater degree that there is no comparison between the two, because at every step one is on the point of losing one’s life.

And what is more astonishing is that as soon as one soldier falls never to rise until doomsday, another takes his place; and, if this one also falls into the sea that awaits him like one more enemy, another and another replace him without a moment’s pause between their deaths; the finest example of courage and daring to be found in all the extremities of war.

Considered a founding work of western literature, Don Quixote was the masterpiece of Miguel Cervantes who was not only a man of letters, but a soldier injured in combat, captured, and imprisoned. Quixote saw nobility and honor in the profession of arms and believed it superior to the profession of letters.

Yet a leader in the armed forces is unique.  It is this leader who stands up for something outside himself, who chooses to put country first, to defend her against all enemies, foreign and domestic, to keep the faith even when his life is at stake.  This he does without reservation. There is no leadership like the leadership in battle, because the lives of soldiers depend on it, as does our nation’s security.

Oath of Office for a Commissioned Officer in the U.S. Army

I, _____, having been appointed an officer in the Army of the United States, as indicated above in the grade of _____ do solemnly swear (or affirm) that I will support and defend the Constitution of the United States against all enemies, foreign and domestic, that I will bear true faith and allegiance to the same; that I take this obligation freely, without any mental reservations or purpose of evasion; and that I will well and faithfully discharge the duties of the office upon which I am about to enter; So help me God.” (DA Form 71, 1 August 1959, for officers.)

Should it matter that our president not have military experience? It should. Of course many who do not serve could become excellent presidents, but it is something to consider. As Commander-in-Chief, a president sends soldiers into harm’s way and 31, fully three quarters, of our country’s presidents had taken that oath and served. Having a personal understanding of the nature of the burden we ask of those who serve is incredibly valuable when making those decisions.  We have a population over 318 million and an active duty military population of 1.3 million today, less than half what it was in 1954 (the Army about a third).

The disturbing reality is the disconnect between America and its armed forces, that more and more, these men and women are becoming ‘outsourced’ like corporate security personnel or the IT department. Americans don’t feel the risk anymore because the soldier, the fewer than 1% of us, is no longer one of us.

Back to the dais and the debate and the Don, the candidates represent 99.6% of the non-military America after all, mathematically probable. And in an era with more deployments, more often, across the globe, you must ask yourself if that makes sense.

**  Here are data about Presidential military service (31 served and 12 did not), Active Duty Personnel, US Population. 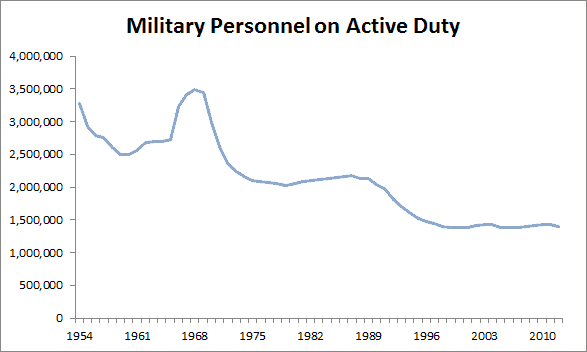