This letter is dedicated to the memory of my classmates and friends and all of those who decided that life was too much for them, too tough, that there was just not enough will or strength or support to carry on. A post circulating on social media reminded me that September is Suicide Prevention month and that “there is always a better choice if one digs deeply enough…. [that] suicide is a permanent solution to a temporary problem.”

Here are some facts I learned. Suicide is the tenth leading cause of death, claiming 44,965 lives a year. It is the second leading cause of death in the world among 15-24 year olds and there are an estimated quarter million suicide survivors every year. (SAVE.org Suicide Facts). A person dies in the U.S. from suicide every 12 minutes.

These statistics surprised me, especially in the young population.

What can you do? Let me share a story.

I received an Email from a military foundation about a female medic who returned from Afghanistan, having experienced “unspeakable tragedies – many involving children.” She struggled to put these behind her and suffered from severe PTSD.

The only stability she had in her life was in the military, which she planned to make her career. Due to her PTSD, however, she soon found out she was to be medically discharged. Angry, impatient, and withdrawn, she began to push her family away.

The veteran decided she couldn’t go back to a life without the support and purpose she found in the military, so she made plans to die by an overdose of sleeping medications.

After taking the pills, images of her children came to her mind and she called for help. The paramedics saved her life though she has serious injuries from the overdose.

When asked by a clinical team member if she told anyone of her plans, she said she really didn’t speak to anyone, that she was removed from her family, friends, and co-workers. When asked if she would have shared her suicide plans with someone if they had asked, she paused, considered the question, and quietly answered that she very well may have because it would have meant someone cared.

The subject line of this story was “Ask a question, save a life.” Perhaps if someone, anyone, asked this veteran if she was OK, she would not have attempted suicide. So here’s something you can do: pay attention, see beyond yourself, see others clearly, care, ask, do something. Be mindful. Be aware.

Every day, people suffer and struggle. It’s the lot of our species I think, suffering, and when my teen read this story aloud this morning, the family was silent. I told my children that young people are at great risk because they have little experience with life, that life and emotions and struggle are not unlike the weather, that life has seasons, that the sun shines and rain falls, and even when the storm comes, it passes. It leaves ruin in its wake at times, so look for shelter, seek high ground, find something to hold on to in the torrent and flood. Because it WILL come. Suffering exists. 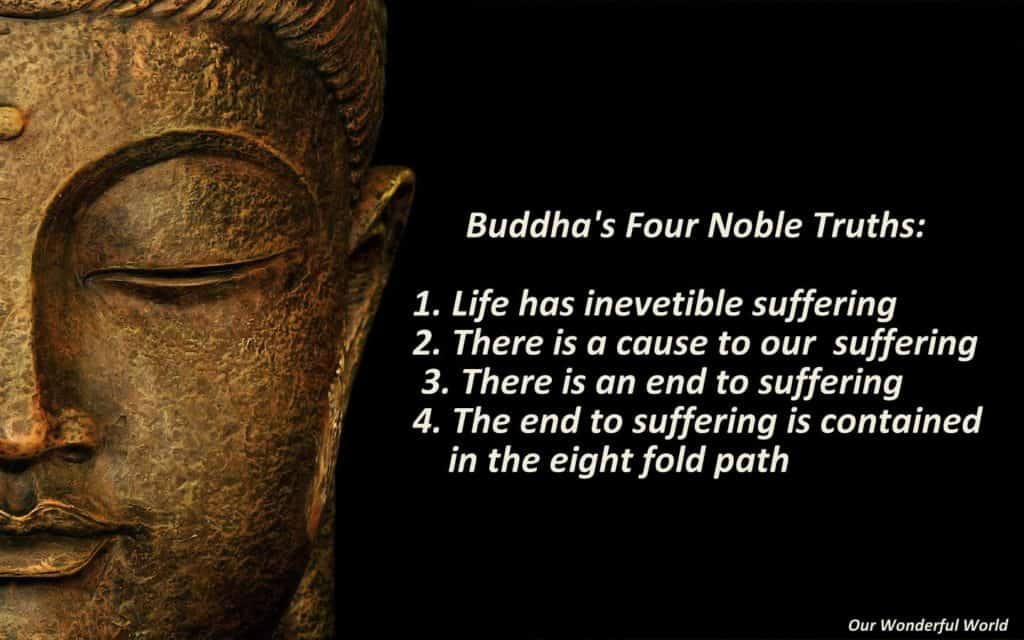 Here is something to hold on to during difficult times, a lesson Siddhartha brought forth after his enlightenment.

The Buddha taught the Four Noble Truths: (1) the existence of suffering, (2) the causes of suffering, (3) the cessation of suffering, and (4) the path that leads to the cessation of suffering. He said, “In addition to the sufferings of birth, old age, sickness, and death, human beings endure other sufferings which they themselves create. Out of ignorance and false views, people say and do things that create suffering for themselves and others. Anger, hatred, suspicion, jealousy, and frustration cause suffering. All these arise from lack of awareness. People are caught in their suffering as if they were caught in a house on fire, and most of our suffering we create ourselves. You cannot find freedom by praying to some god. You must look deeply into your own mind and situation in order to uproot the false views which are the root of suffering. You must find the source of your suffering in order to understand the nature of suffering. Once you understand the nature of suffering, it can no longer bind you.” (Old Path, White Clouds, Thich Nhat Hanh,p.341 link to Chapter 35)

These are easy enough to read, but true understanding takes time, practice, and patience. Siddhartha explained this to the sangha, or the community, upon his return to his father’s kingdom. He taught his people, his disciples, his family, and the King, that suffering is real and inevitable, that there are causes to such suffering and in understanding these, there is also a cessation to such suffering. There is a path away from suffering and by practicing awareness in daily life and looking deeply into things, it is possible to realize peace and joy.

It’s taken me years, decades really, to develop awareness, to be mindful, to look past my biases, my experiences, and see clearly. I work at it each day. Sometimes I succeed and often I don’t because my view is clouded with activities, stress, emotions, social angst, impatience, frustration. As a secular Buddhist, I’ve learned to appreciate meditation and its role in slowing life down, simply breathing in and out.

I thought a lot about suffering and suicide on my run this morning. Running and meditation go well together actually. There’s pain in running, especially over long distances. Runners are easily distracted by their own pain and it’s hard to see anything clearly. Yet Siddhartha’s lesson about the Four Noble Truths has helped me understand, from intense physical pain to the despair and grief from the loss of loved ones to loneliness. There is an end to, and a liberation from, suffering.

The brain is infinitely complex, the most complex machine in the universe, and human experience is the same. Life and suffering may be synonymous for some, the experience so dark and depressing, they decide there is only one way out. You may know this feeling, and you may be lucky that you have family, friends, resources, and support to help you through it. If you don’t, find help. Talk to someone.

Be mindful of others, see clearly, ask a question.

There is always another day, another chance, another face.

Siddhartha: “But suffering is only one face of life. Life has another face, the face of wonder. If we can see that face of life, we will have happiness, peace, and joy. When our hearts are unfettered, we can make direct contact with the wonders of life.” (Hanh, p.346)

For Pete, Janet, Kim, and Scott. 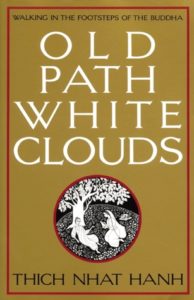 Hanh’s Book is simply written, drawing directly from 24 Pali, Sanskrit, and Chinese Sources. It is the greatest comfort to read his words about the life of the Buddha.  Link to book.