A New Year: Goals Versus Habits 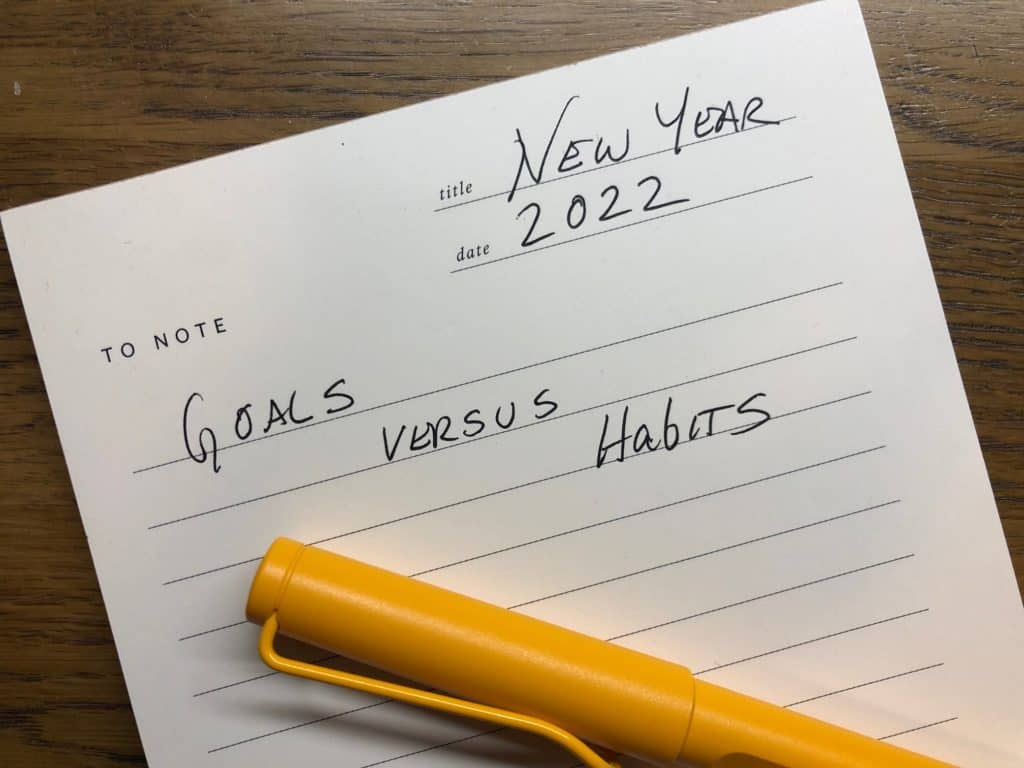 The  New Year means resolutions and goals, or so it has for me for decades. My father would ask my brother and me as children what our resolutions were. This has been a good practice to reflect on the prior year and consider what I can do to improve in my work, at home, and as a person.

The role of buddies in this process has made this a wonderful experience. Five years ago, friends met me for my birthday and I brought along goals sheets, made from a printout I chose on the internet. This was a timely surprise for them, because they were looking for something similar, to provide focus and feedback. And, the group became a lasting gift to me. The simple sheet fit the bill at the start, a one-page outline with six large bubbles or focus areas with the largest taking a third of the page, the Big One. Others included Home, Family, Personal, Bonus, and a fun bubble for My Motto. 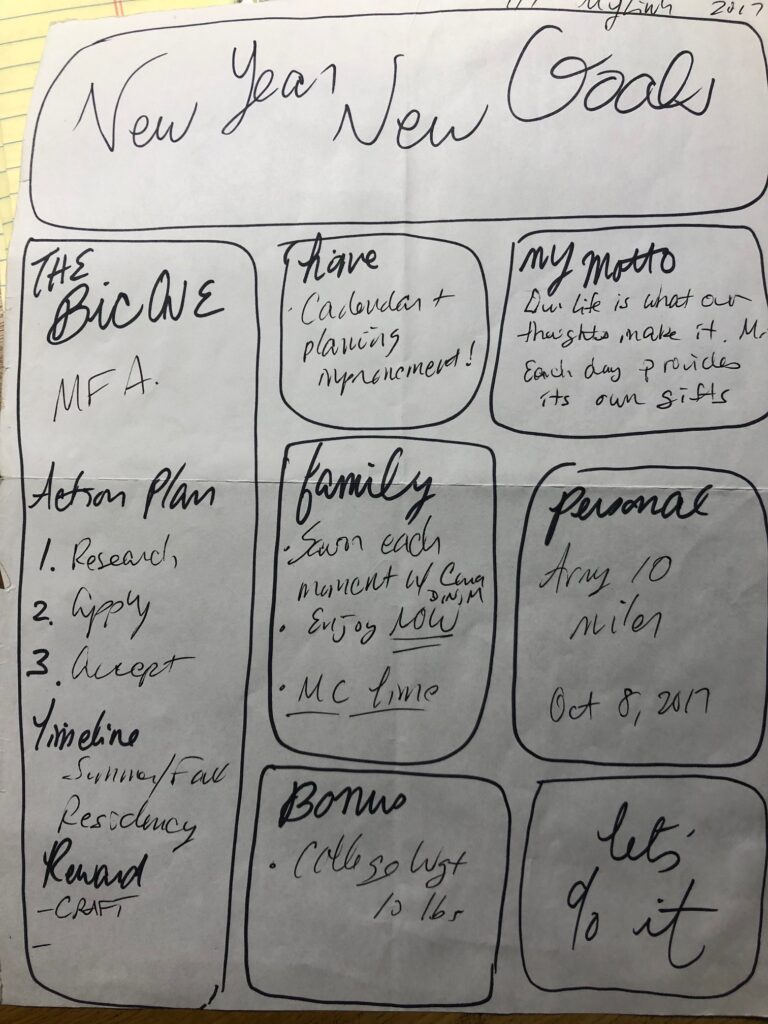 This form gave me focus and the group met every few months. I adjusted based on progress and peer insight.  It helped: I earned a degree and completed the Army Ten Miler each year.

It has helped me stay focused but I’ve been rethinking the model and the idea of goals, especially this last year. I fell short or off the path in several areas even when I accomplished the stated goal. For example, though I achieved my annual goal to run the Army Ten Miler, I was disappointed with my level of conditioning each year, the reality that I had to work back from injury and extra weight. Surely there had to be a better way to approach the race. My Bonus goal five years ago was to lose weight and get back to my college competitive running weight. That did not happen.

The weight goal dropped off my sheet in later years because I was more focused on fitness. The good part of this broad view was my exposure to Chi Running ( www.chirunning.com ) this year. I read the book and the idea of injury-free running at any age helped. Big shout out to Christy for turning me on to this! I hadn’t been sure I would be able to run distance without pain or injury. This is worthy of its own letter, because as a big (at 5 foot 9 inch, 160+ pound, I qualify for Clydesdale / Athena category) runner and Army veteran, I’ve had my share of injuries.

Chi Running is based on correct form and breathing, working on cadence or steps per minute. This helped me develop healthy running habits and has become more important than the goal of any particular race or distance or speed. Focusing on good running form and making running easy on my body transformed my approach. The race was virtual this past fall, not in Washington DC, but along a route of my choosing. I ran the ten miles injury-free and did so in surprising time. This transition in my attitude about running also guided me away from a fixation on goals and towards a system of good habits.

The Problem with Goals

During meetings with my goals group, I realized that while the format was good it was not ideal for this stage. During the holidays, I stumbled on James Clear’s book and it kind of screamed at me, in its quiet way, sitting on the display shelf. I bought it for my husband and realized I had a lot I could learn from it. 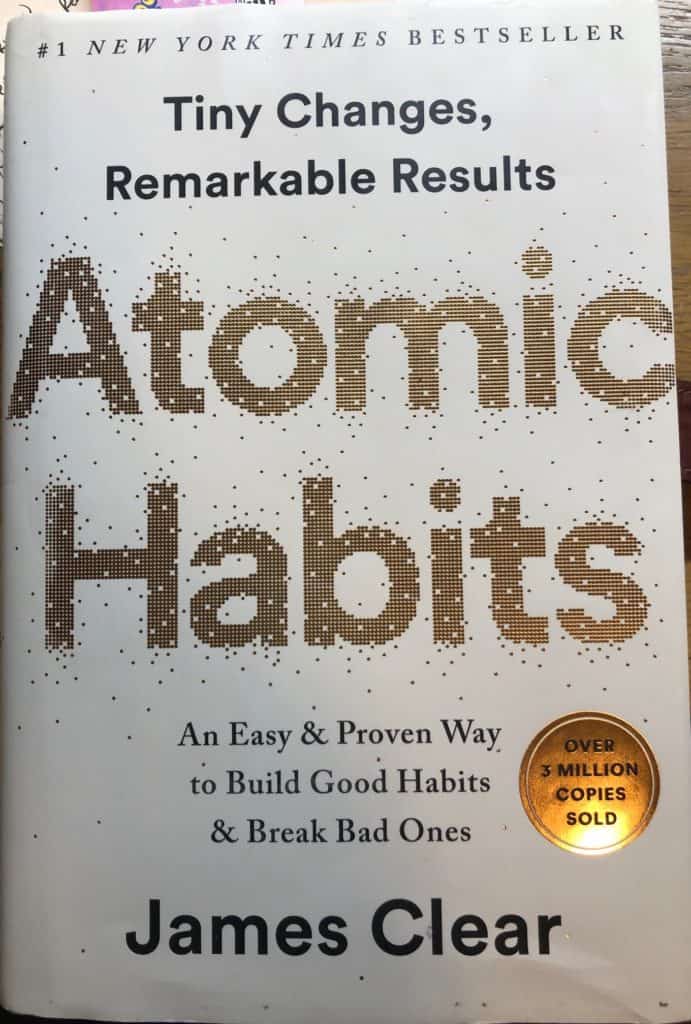 He makes a case in his second chapter for habits over goals. Goals are good for having a sense of direction but he suggests you forget about goals and focus on systems instead. One case he makes is that winners and losers go into a game with the same goal, so there is a survivorship bias. It’s easy to overlook losers or simply get down, when you may be on the cusp of your next plateau or an upcoming win. A goal is merely a momentary change and that can restrict happiness. But process is not an either-or or a win-lose. The goal is really only one point on a longer journey.

The author suggests that the systems-first mentality is the antidote to this short-lived situation or goal, that the process and habits are what we should fall in love with, not any specific moment. The Yo-yo effect which he describes was something I suffered from in running: training to cross the finish line, then stopping everything. I am better off to develop good habits.

James Clear provides advice on how to build good habits and break bad ones. He shares anecdotes and science which support progress through daily rituals. It resonates with me because I believe habits are a better way to go, that a good routine helps fight the boredom of doing the same thing, as long as I can make the routines work for me.

Here are his four laws for effective behavior change. You can learn more at his site, jamesclear.com

The opposite of these are used to break bad habits, like making it invisible for the first law. He talks about priming the environment to set the stage for what you want to do. To declutter the desk is an example. I cleaned the Tree House to focus on work at the desk, crafts on the bench, and correspondence at the secretary. It has already helped. My desk and office were full of clutter and now I have only work-related material on my writing desk.

As a food junkie, I also “primed” the kitchen with healthy snacks and treats, moved the liquor bottles into the cabinet or basement. I don’t drink but figured this would help my husband! The idea is that by priming my environment, I see and use what is there, while using less of what is not there. In one study Clear shared how a hospital administrator redesigned the cafeteria and moved the sodas to the back and set up multiple water stations; the result was significant reduction in soda consumption and higher water consumption. And the hospital did so without classes, lectures or emails, but by simply redesigning the dining environment.

The author used convincing anecdotes, evidence, and methods. The book was worth reading and I will review the pages I tabbed. The Paper Clip theory was an example of what clear calls a Strategy of Visual Progress. A young stockbroker had two jars on his desk, one with 120 paper clips and the other with nothing inside. He moved a clip for each phone call he made, until he made 120 calls each day to new clients. At the end of eighteen months he brought in five million to the firm and was earning a nice salary.

You Are What You Repeatedly Do

If I agree with this premise, then who am I? A runner, a writer, a musician. I can have goals, but the focus should be about process or habits. What makes sense about Chi Running and other good habits, is that they support the idea I have of myself, that is, they help me become my better self. What that looks like is dynamic and evolves, but reflection on outcomes and process, and adjusting the habits that support them are vital to who I am. And, help with the kind of person I hope to become.

James Clear sketches three circles, with outcomes on the outside, then process inside of that, and identity on the very inside. He believes these are three levels of change and they are interdependent. The outcome defines process which defines identity. But, I can drive that both ways, the identity drives process which determines outcomes.

This made me think of the onion with its layers. If you peel one layer away and find another and another, eventually, you’ve peeled away the entire onion. The layers are the onion. You become your habits.