This book is an interesting source for answers. I guessed the author would be a philosopher or a novelist, maybe a rabbi or priest.  But he is none of those.

He is a myrmecologist, or scientist specializing in the study of ants.  Edward Osborne Wilson won the Pulitzer for General Non-fiction in 1979 for On Human Nature and in 1991 for The Ants with Bert Holldobler. This is his latest work, The Meaning of Human Existence.

I liked the title and admired the ambition.  I read religious texts, philosophical works, and literature, hoping to find answers about our existence, or at least an illumination of the human journey. In 187 pages, Wilson provides a perspective popular in the age of science. 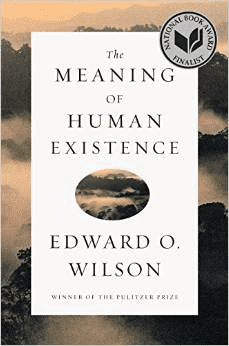 Published in 2014, Link to book and reviews

THE REASON WE EXIST

Wilson outlines the two views on human existence: the creation stories of organized religions and the ‘broader’ view that “the accidents of history, not the intentions of a designer, are the source of meaning.”  He says “we are not predestined to reach any goal, nor are we answerable to any power but our own.  Only wisdom based on self-understanding, not piety, will save us.”

Wilson makes the case through biology and prehistory, or evolution of our species.  Eusociality, or the most complex social behaviors, occurs in only 20 species on the planet out of hundreds of thousands.  The human species is one among them; the other 19 are insects, marine crustaceans, and rodents.

Considering our existence in this context alongside the ant, the shrimp, and the rat, it’s not surprising that Wilson believes understanding our existence is “simpler than we think.” He says there’s no fate or mystery, no demons or gods vying for allegiance.

Our existence and long term survival are predicated on one thing.

I should have expected as much from the world’s leading ant expert. If you were hoping for deeper meaning as to why we are here, you won’t find it in this book.

Science deals with the facts. It struggles with WHY, despite Wilson’s sometimes eloquent, often meandering writing.

Wilson discusses intrinsic good and evil, that scientific evidence suggests we are both of these at once, that there is a natural internal conflict.  It is from this inner conflict that we evolved as a species: to do good for the self and to do good for the group.  This multilevel selection, the competition and cooperation between individuals, as well as the competition and cooperation between groups, makes us who we are.

The social need and tribal sense to belong is strong, but the balance between self and group is precarious. Altruism vs. greed.  Humans are forever conflicted, yet it is this suspension between “unstable and constantly changing positions between two extreme forces that created us.”

To give in completely to the instinctual urgings born from individual selection would be to dissolve society. At the opposite extreme, to surrender to the urgings from group selection would turn us into angelic robots — the outsized equivalents of ants. (Wilson, 33)

I would ask Wilson, given this definition of good and evil as it relates to inner conflict, are ants good because they work for the colony? and fish evil because they are selfish?

Even he realizes the shortcomings of science, and that brings us to his next point.

THE ALL-IMPORTANCE OF THE HUMANITIES

Wilson says we must integrate the humanities and science. In a time in human history when we possess the know-how to modify and change our biological make up, alter our evolutionary trajectory, if we call it that, the humanities are more important than ever.  We must decide what is the right thing to do and why.

Wilson surprised me when he cast his vote “for existential conservatism of biological human nature as a sacred trust . . . let’s also promote the humanities, that which makes us human, and not use science to mess around with the wellspring of this, the absolute and unique potential of the human future.”

He uses the word “sacred” and recognizes we are distinct and “unique” in this world. Is this appeal to the humanities a concession that science alone does not explain our existence?

As a sociobiologist, Wilson writes about social evolution, natural selection, kin selection, and the study of ants. He even explores other worlds, extra-terrestrials (ET). It’s a fun what-if scenario imagining intelligent ETs, and the professor’s sketch is more entertaining than substantive, which he acknowledges.

Since long term survival and self-understanding are his reason for existence, we must take heed. The ‘agents of destruction’ will cause a collapse of biodiversity and a new era, the Anthropocene, or the age of our one species alone. Wilson suggests we call this miserable future the Eremocene, or the Age of Loneliness. There’s a handy acronym for these malicious agents, HIPPO, or Habitat loss, Invasive species, Pollution, Population growth, and Overharvesting.  The rest of the century will be “a bottleneck of growing human impact on the environment and diminishment of biodiversity.” (Wilson, 131)

The choice to avoid this calamity, this train wreck we’re heading towards, Wilson said is a “profoundly moral one.”

We alone among all species have grasped the reality of the living world, seen the beauty of nature, and given value to the individual. We alone have measured the quality of mercy among our own kind. Might we now extend the same concern to the living word that gave us birth? (132)

THE MIND, CONSCIOUSNESS, AND FREE WILL

At the end of the book, Wilson examines human instinct, religion, and free will.  In the 1970s, social scientists believed the larger impact on human nature was social or cultural.  Today, it’s believed that it has a strong genetic component and Wilson says human instinct is a major factor.  Religions with their unique creation stories create tribalism and group conflict.

As Carl Jung once said, some problems can never be solved, only outgrown. And so it must be for the Absolute Paradox. There is no solution because there is nothing to solve. The problem is not in the nature or even in the existence of God. It is in the biological origins of human existence and in the nature of the human mind, and what made us the evolutionary pinnacle of the biosphere. The best way to live in this real world is to free ourselves of the demons and tribal gods. (158)

Wilson says the human brain is the most complex system in the known universe.  Neuroscientists attempt to understand it scientifically through an effort called the Brain Activity Map (BAM), a map of the activity of every neuron in real time, a program equal in magnitude to the Human Genome Project.

Wilson acknowledges the brain may be mapped and defined by neuroscience, but consciousness and free will likely never be explained.

Yet consciousness and free will exist.

Where does he leave us then?

Wilson says the greatest goal is the unity of the human race and for that we need accurate self-understanding.  he concludes:

We were created not by a supernatural intelligence but by chance and necessity as one species out of millions of species in Earth’s biosphere. Hope and wish for otherwise as we will, there is no evidence of an external grace shining down upon us, no demonstrable destiny or purpose assigned us, no second life vouchsafed us for the end of the present one. We are it seems, completely alone. And that in my opinion is a very good thing. It means we are completely free. (173)

Ironically, Wilson’s reason for dismissing the creation myths and intelligent design all come from the physical world.  Biologists and scientists and myrmecologists analyze nature, the environment, mathematics, and social behaviors. Wilson called this a bottoms up analysis.

In his own words, Wilson says philosophers analyze the world top down.

If the most complex system in the known universe is the human brain as he argues, it is clear that the mind, free will, and consciousness have a lot to do with the meaning of human existence and something more than the goal he suggests. And that is purpose.  And discussion and answers about the purpose of the human race do not come from the physical world, biology, or our environment. Quite the opposite.

They are moral issues, and that has everything to do with free will and human consciousness.

And there’s the mystery.

For someone who made a name for himself studying ants and insects, his thinking on meaning and purpose, like his career subject, is rather small.