“Do you feel lucky?” – The Luck Factor by Dr. Richard Wiseman 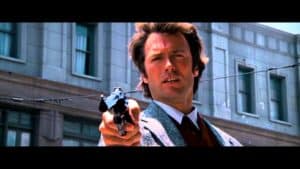 Here’s a story I shared with my teen-aged daughter when things weren’t going so well in class.

Martin stopped by the coffee shop one morning before his meeting. On his way in, he noticed a five pound sterling note by the door and he picked it up. He greeted the barista, ordered his coffee, then scanned the shop before choosing to sit down next to a well-dressed man at the counter.  He engaged him in conversation and before he left, they exchanged business cards.

Brenda visited the same shop, but things turned out very differently.  She walked right past the five pound sterling note at the door.  Inside, she ordered her drink and sat at the counter next to a business man, but she did so quietly, not saying a word to anyone.

You might be wondering about these parallel stories, because that’s exactly what they are.

University of Hertfordshire Professor Dr. Richard Wiseman staged this experiment with actors and cameras. They placed the crisp five pound note on the pavement right outside the shop and arranged only four tables, each with a stooge, and one successful businessman at the counter.  The actors were instructed to behave in exactly the same way, regardless if Martin or Brenda came up to them.

Later, the professor interviewed both about their morning. Brenda “looked at [him] blankly and said it had been an uneventful morning.”  Martin told him about finding the money in the street and a nice chat he had in the coffee shop.

Wiseman conducted eight years of extensive interviews with over 400 people to study the concept of luck. Martin and Brenda provided two of the most unusual interviews. Brenda was accident prone, described herself as a “walking disaster,” and considered herself very unlucky. Martin won a jackpot prize of over 7 million pounds and, not surprisingly, believed he was very lucky.

ON SEEING:  the News and a Card Trick

Wiseman gave volunteers a newspaper and asked them to count the number of photographs. Scanning the pages, most were finished in a couple of minutes and several took time to check the paper twice.  He told them they could have given him the answer in seconds. On the second page was a  message which said, STOP COUNTING – THERE ARE 43 PHOTOGRAPHS IN THIS NEWSPAPER. Not one person read it and it was not small; it took up half of the page and was written in 1.5 inch type. They didn’t see it because they were consumed with looking for photographs.

Halfway through the newspaper was a message even more significant, providing a chance to win a financial reward. STOP COUNTING AND TELL THE EXPERIMENTER YOU HAVE SEEN THIS AND WIN $250.  Again it was a half-page ad in huge type. At the end of the experiment, Wiseman asked if they saw anything unusual in the paper and they hadn’t. So he directed them to flip through it again. Within seconds they saw the first message and were shocked when they saw the second.  (The Luck Factor, pp 43-44)

Here’s another example Wiseman shared to illustrate the principle behind this behavior.

Wiseman selects five cards and places them face up on the table. He asks one of his guests to look at the cards, choose one, and remember it.  He asks that guest to leave the room, then he picks up the cards, decides which he thinks the guest chose and puts four cards back on the table. He invites the guest back into the room and asks him to look at the cards and tell him if his card is missing.

He has performed this trick many times and he is always correct.

So Wiseman asked the reader to try it.  Here are five cards.  Look at them, choose one, and remember it. 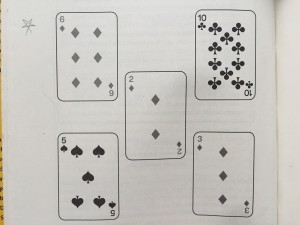 Look at these, choose one, and remember it.

Imagine leaving the room and being invited back in.  He predicted that your card will be missing.  Scroll down below to see if it is missing.

There’s no magic here.  But Wiseman says it has everything to do with a simple psychological principle: we notice only things that are important to us. If you haven’t figured this out, take a second look at the cards above, then scroll down and look at the cards below.

Lucky people see what is there, rather than trying to find what they want to see. As a result, they are far more receptive to any opportunities that arise naturally. (p. 48)

He asked readers just what sort of person sees the five pound sterling note.  Who would see the newspaper message when searching for photographs? The answer has to do with neuroticism, a dimension on which lucky and unlucky people differ. Lucky people have much lower neuroticism scores. People who are less neurotic are “generally calm and relaxed” and notice chance opportunities even when they are not looking for them.

When I first read Wiseman’s book, The Luck Factor, it was ten years ago. As an introvert, I learned about the positive influence of human connection, the pitfalls of neuroticism which runs in my family, and the opportunities available everywhere, every day, if I were simply willing to be open to them.  It was not easy to put into practice, but the mathematician in me found his research compelling.  I even used his stories as a college adjunct, teaching students how to learn and be successful.

The book is not an objective study of luck, but a rational approach to the perception of luck, why some believe themselves lucky and others don’t. Early in his research, Wiseman observed:

… most people were indicating an amazing level of consistency in their experience of good and back luck. Certain people seemed able to consistently attract good luck while others were a magnet for ill fortune.

The book explores this illusion and debunks it.  Luck does not require exceptional talent, off-the-charts intelligence, and infinite hours of hard work. 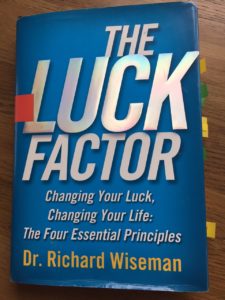 My copy of The Luck Factor, tabbed and dog-eared

THE MAGICIAN, THE TEACHER, THE WISE-MAN

Wiseman was a teen magician, a street performer in England who learned his trade working the crowds at Covent Gardens. He then earned a degree in psychology because the study of people fascinated him. Wiseman’s research is used in classrooms around the world, he’s published in leading academic journals, and he’s delivered keynote addresses to  institutions like Google and Amazon.

But perhaps Wiseman’s own life, from street magician to professor, is an example which provides the best lesson. Understand and see what is there, not only what you are looking for. You will open yourself up to see more, to maximize opportunity, and to expect good fortune.

Because “luck is something that can be learned.”

** A writer for Scientific American described Wiseman as “…the most interesting and innovative experimental psychologist in the world today”.

**  Cards – the four cards with the reader’s card missing 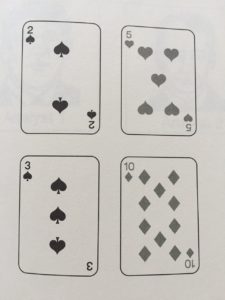