Zest for Life: Five Types of Eaters and The Conquest of Happiness – Bertrand Russell

British logician and philosopher Bertrand Russell asks readers to consider five different ways a man may receive his meal. For some it is entirely a bore, no matter how good the food may be.

They have had excellent food before, probably at almost every meal they have eaten. They have never known what it was to go without a meal until hunger became a raging passion, but have come to regard meals as merely conventional occurrences, dictated by the fashions of society in which they live. Like everything else, meals are tiresome, but it is no use to make a fuss, because nothing else will be less tiresome.

A friend whose husband is a successful businessman entrenched tirelessly in his work finds food a distraction, saying that if possible he would take a pill once a day to provide his daily sustenance. For this man, meals are a bore.

Next are the invalids, whose meals must be taken as prescribed; their health and constitution are such that meals are  joyless, necessary for “nourishment to keep up their strength.”

Then there are the epicures who start hopefully, but find that nothing has been quite so well cooked as it ought to have been. Then there are the gormandizers, who fall upon their food with eager rapacity, eat too much, and grow plethoric and stertorous. Finally there are those who begin with a sound appetite, are glad of their food, eat until they have had enough and then stop.

I shared this categorizing at dinner last night, btw. We have sound appetites in our family, but there is on occasion some ravenous, gluttonous eating, ok, inhalation of food. Conclusions were noted and the discussion gave us perspective.

For ease of reference, let’s call the types of eaters the bore, the invalid, the epicure, the gormandizer, and the man of sound appetite. The first four despise the last and from “the height of their disillusionment they look down upon those whom they despise as simple souls.”

Russell argues that only the man with sound appetite, this zest for life, possesses a genuine and appropriate interest at the feast. And by such an approach, he focuses his attention outward, towards what is offered, away from inward obsession; this healthy appetite affords opportunity for interest and engagement, providing a pleasure which the others do not have.  He shares examples of zest like that possessed by Sherlock Holmes or an attentive traveler, as well as counter examples such as the drug addict and the Empress Josephine, a “gormandizer in regard to clothes.” **

The Conquest of Happiness *

The meal analogy is from a popular book Bertrand Russell wrote in 1930 at the age of 58, The Conquest of Happiness.  His views on women, race, and class are dated, but he was progressive for the times. As revered as much as he was reviled, there’s no doubting his contribution to philosophy, mathematics, and logic. The underlying rationale and the writings of an orderly mind in this work are appealing. For an 86 year old book, it’s more keen and insightful than much of the self- help work written by generations since.

Russell divided the book into two parts, the causes of unhappiness and the causes of happiness. He writes about “What Makes People Unhappy” in his first chapter and begins with a few words of autobiography, namely that he struggled as a child, finding the boredom of life almost unendurable, continually on the verge of suicide.  He is critical and objective of his young life and afterward, I learned that, although he was an Earl of aristocratic birth, by the age of six both parents,  his sister, and his grandfather had all died. Here was someone who survived tragic circumstances, rose from it to contribute to society, and eventually secured happiness on his own terms. 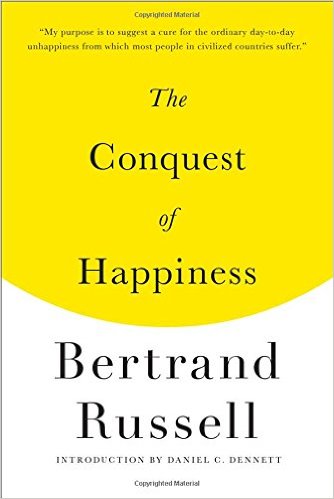 Bertrand Russell wrote this book in 1930 to “suggest a cure for the ordinary day-to-day unhappiness from which most people in civilized countries suffer.” Link to Book

Russell developed an early interest in mathematics and said that it saved him from himself and his habit of “ meditating on [his] sins, follies, and shortcomings.” He had believed himself a miserable specimen of his Puritan education. “External discipline is the the only road to happiness for those unfortunates whose self-absorption is too profound to be cured in any other way.” Focusing his attention on external objects and developing external interests lifted him out of despair. Self absorption, he explained, is exhibited in three common ways: the sinner, the narcissist, and the megalomaniac. Given the current political slate, this particular chapter proved very timely.

His arguments for selflessness throughout the book, as well as his explanations about the causes of unhappiness reminded me of the fundamental beliefs of Buddhism: the idea of no self or selflessness along with the four noble truths. I wondered what kind of unconscious effect it may have had; surely Russell studied the major religions, having rejected his own Christian roots. Or perhaps, like the Buddha, he was on his way to becoming an enlightened being or reached such a state himself; everyone has such a capacity.

First, life has suffering (his opening acknowledgement and rationale for the book)

Second, there are causes to suffering (first half of book on causes of unhappiness)

Third, there is an end to suffering (second half of book)

Four, eight fold path is the way to end suffering (causes of happiness, “right actions” like a sound appetite, the right way he describes, the balanced or golden mean)

The book fascinated me with something on every page, every paragraph. Although I’m a decade younger than Russell when he wrote it, I found his anecdotal evidence consistent with my own observations and his introduction of new ideas and analysis still powerful today. Let go of the self, explore genuine interests, embrace and foster reciprocal affection in relationships.

** Excerpt on the traveler from Chapter 11 Zest 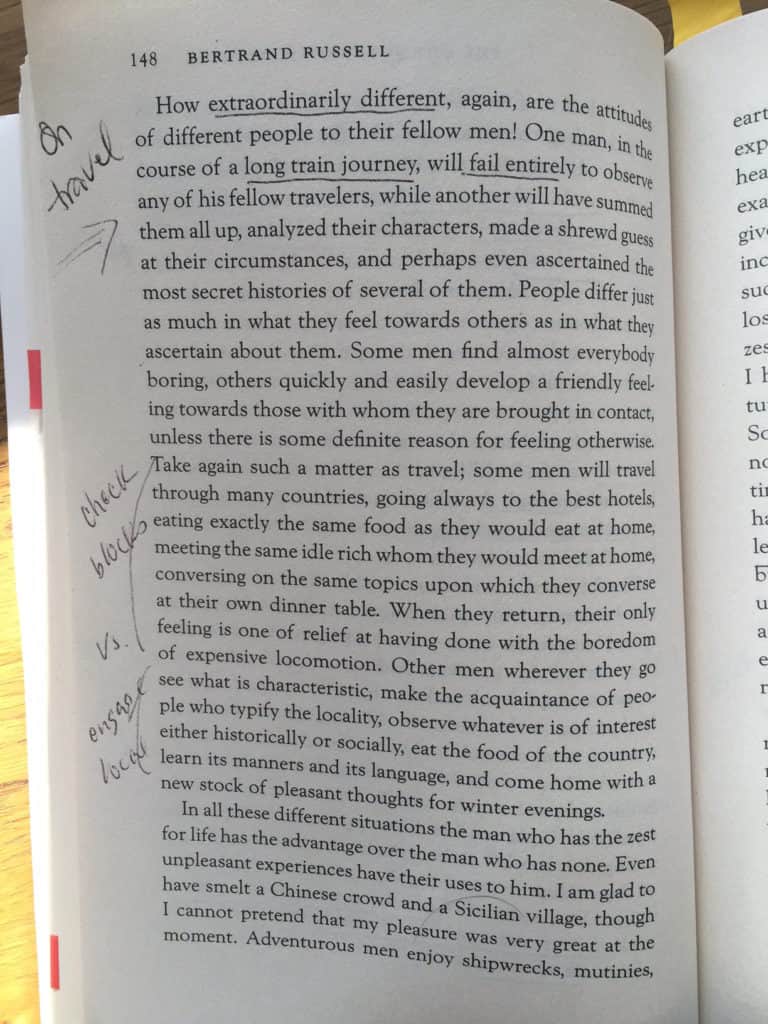