A View from Above: an Army Commander in Afghanistan

*** Please listen to Podcast to hear full unedited and unscripted interview: Colonel Mintz shares the story and reflects on Afghanistan and the broader context of the war today ***

What is America’s longest war? The answer to that has changed.

The War in Afghanistan surpassed the Vietnam War in 2019. The current conflict began in October 2001 after 9-11 and continues today. Eighteen years and counting. Many Americans may not realize this sobering fact because fewer than one percent put on the uniform now.

On Veterans Day, the nation shows its gratitude for the men and women who have served in the armed forces. I interviewed Colonel Ken Mintz, a friend and classmate from West Point, who is still on active duty. He shared a story about the OH-58 Kiowa helicopter, the single engine, single rotor observation craft designed to provide armed reconnaissance and recently retired from army service in 2017.

You can listen to the story and interview on the podcast in Colonel Mintz’s own voice, his reflections on the experience as well as his insight on the war.  What are his thoughts eight years after his deployment to Afghanistan as a battalion commander in the 10th Mountain Division? How does this story fit the mission today? What of the human narrative, the risks to American lives, a child’s role amid the horrors, as instrument and pawn in destruction?

And most importantly, like the view on the ground with its visual limitations, are the language and cultural barriers surmountable? Just how much and how long should America help its allies in any conflict, whether that is Afghanistan or Syria or Vietnam?

A Letter from Colonel Kenneth Mintz

I was recently watching some combat footage of a Kiowa Warrior helicopter providing support to some of our troopers in contact back during our 2011-2012 deployment to Afghanistan. As I watched the footage I started to reminisce about a poignant moment I experienced during that deployment.

Prior to a battalion level operation I would often conduct an aerial recon of the area of operations in a Kiowa — this steadfast and venerable helicopter is no longer in service, but was the perfect platform for the perspective I needed to confirm or deny our plan of attack. It is a small two-seater, and I had to squeeze my large frame into the seat next to the nimble pilot. As we lifted in the air, my perspective completely changed.

At the ground level the world is a different place — every foot of the ground conceals all manner of real and imagined threats. Your level of perception extends to the short distance you can actually see. There is a sense of not really knowing what is out there beyond your sight, and a constant sense of foreboding of enemy lurking in a distant palm grove, canal line, behind a wall, or in a fortified mud hut.

To this point in our area of operations we had literally fought for every yard of ground…the enemy had seeded the ground with belts of improvised explosive devices, and defended these belts with hidden teams of fighters armed with small arms and recoilless rifles. It was a very tough place to fight — blazing temperatures, rugged terrain, and a determined, capable enemy.

As we flew across the battalion area of operations it suddenly looked very small, and relatively benign. It looked pastoral and peaceful. I directed the pilot to fly toward the reference points I needed to see from this vantage point. To avoid enemy fire, the pilot flew in a rollercoaster pattern — up and down, up and down, up and down…this method of flying had no effect on the pilot, but played havoc with my gut. I was able to keep from retching as I concentrated intently on the points on the ground I needed to see.

This vantage point truly afforded me the opportunity to visualize the terrain. In my mind’s eye I could literally imagine how our attack would unfold on the ground, and was able to make key adjustments to the plan. On this particular day, the pilot brought me back to my operating base — he set down on the gravel landing zone inside the perimeter walls of the outpost. I thanked him for the flight, and was eager to get my feet back on the ground and to give respite to my twisting guts. The Kiowa lifted up and flew away into the distance. It was quiet.

My ground patrol was enroute to pick me up, and I had a moment to myself. It was actually pleasant to sit in the shade and listen to the sounds from the market drifting on wind from outside our walls. I could hear the chirping of kids’ voices and the sounds of normal, civil life. In the day to day of my existence I rarely took pause to listen to the world around me. Every waking moment was activity, noise, interaction…my mind always racing and contemplating and balancing. But, I let myself listen and reflect on the normalcy I heard on the wind. It was peaceful for a moment. 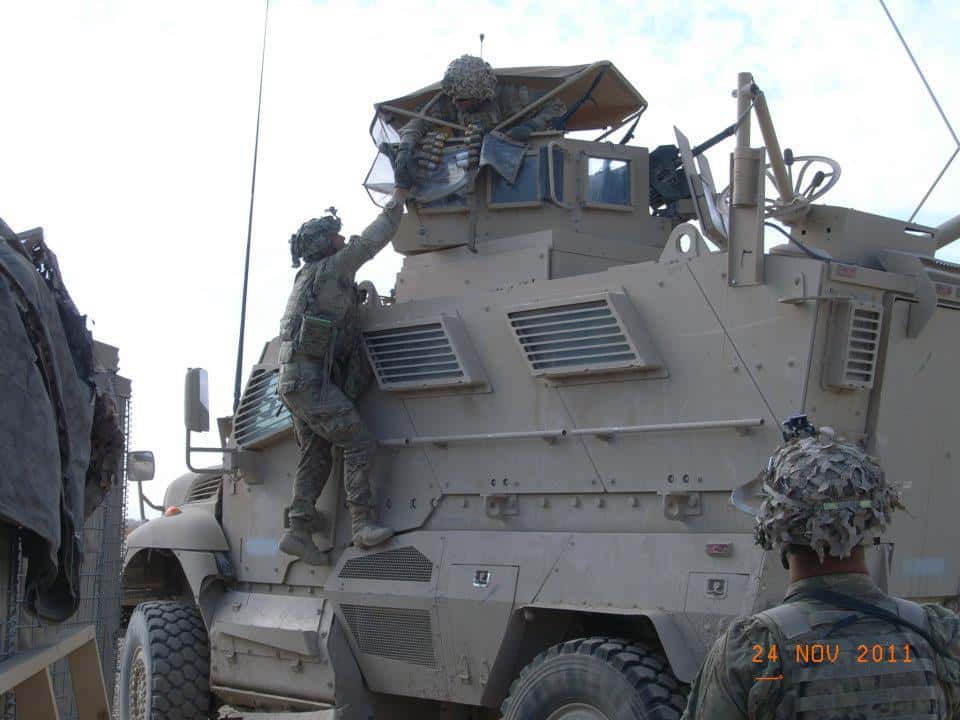 My ground patrol consisting of four massive Mine Resistant Ambush Protected (MRAP) trucks roared up to me about five minutes after I touched down. I mounted my truck, and we moved out into sector to visit one of the company outposts — a daily sojourn of activity that commanders call “battlefield circulation” — this is the daily reconnaissance and “checking” on what is happening on the ground every day. Trying to get the pulse of the unit — checking on the morale and outlook of the soldiers and their leaders…listening to their ideas and perspectives…gripes and complaints…giving orders and making corrections…a constant effort to try and understand the state of the unit, and its relationship to the mission, the terrain, the people…and the same of our Afghan allies. I basically drove around and talked to people all day long every day — my soldiers, but also the Afghan soldiers and policemen, and the civilians and key local leaders. I could write a book about this…about the effort it took to try to communicate with such a disparate group of people, and the effort and patience it took to try and weave this mosaic together to get people to work together — to convince, cajole, charm, describe, argue, listen…a lot of listening. 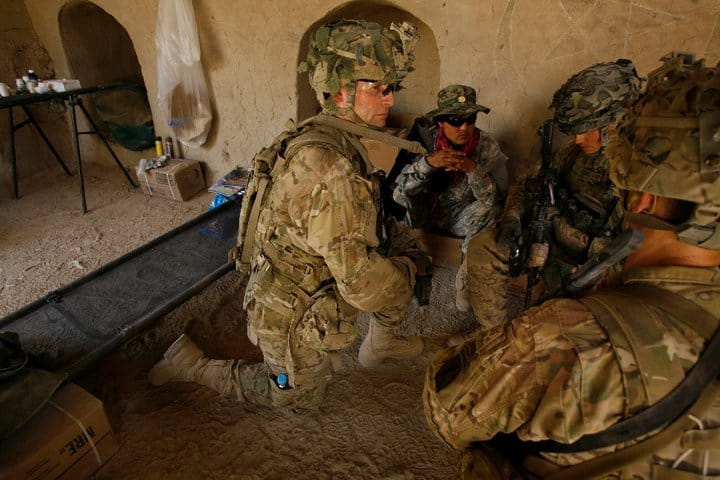 As Battalion Commander, Mintz talks to soldiers in Sarkilla, May 2011 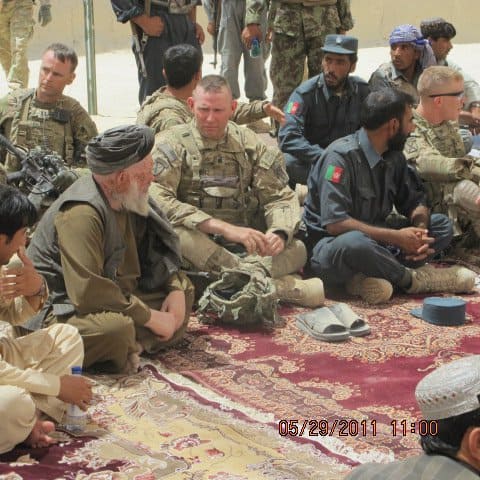 Working with Afghan Leaders May 2011

We drove south into sector on HWY 1 through the bustling market of Howze Madad, and then south toward Lahkokel…and then east onto Route Omid toward COP Sangsar. A short distance down the route my lead vehicle was suddenly engulfed in a cloud of dust. The enemy detonated a command wire improvised explosive device (IED) buried in the road. Thankfully the detonation only caught the rear of the vehicle in front of me, and cast shrapnel and debris into the engine block and windshield of my vehicle. No one was hurt, and there was no major damage.

After getting a status from every element in our mounted patrol, and sending a report to my battalion tactical operation center, I dismounted my vehicle, and was able to trace the command wire to a ditch about 50 meters away. There was a young boy, probably 10 years old watching us a short distance away. I called him over and questioned him. He told us that there was a man hiding in the ditch, and he ran away. But, who really knows. The boy probably was the one who detonated the IED. He didn’t have a choice but to do it or risk harm to himself and his family.

Just as the ground masks the activities of your enemy, so does the language and culture of a foreign land mask the intentions of the people you operate among. On the hot, dusty afternoon I pondered our situation, and the contrasts of the day. The contrast of the perspective between the ground, and my flight that morning…the contrast of my peaceful moment listening to the voices of children, and the sudden violent explosion that snapped me back into the grave reality of the moment. This moment of reflection on a distant battlefield. 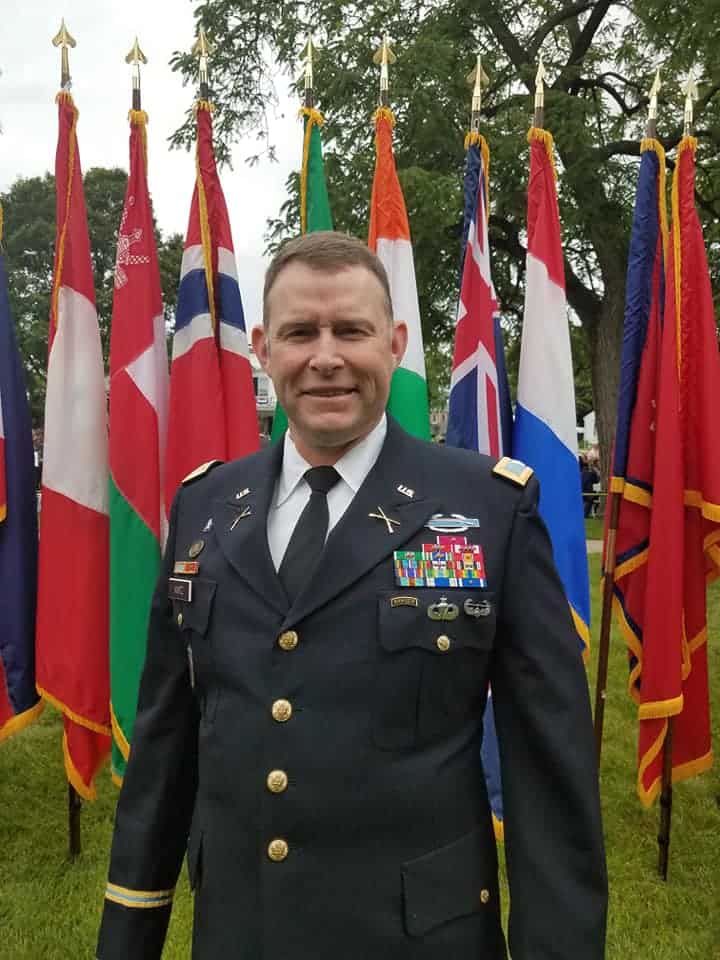