Volleyball and Veterans at West Point

This Veterans Day weekend passed like most others, but I want to share a bit about our visit to West Point.  Army beat Lafayette in football and that made my husband and me feel good, as army veterans.  After the game we hosted our daughter Norah’s volleyball team from King School, a championship squad of talented young players. Our older daughter Cara was a sophomore at West Point who recently joined the Army volleyball team and had played four years for King School. She would be happy to see her friends and her Coach, Tung Tran. 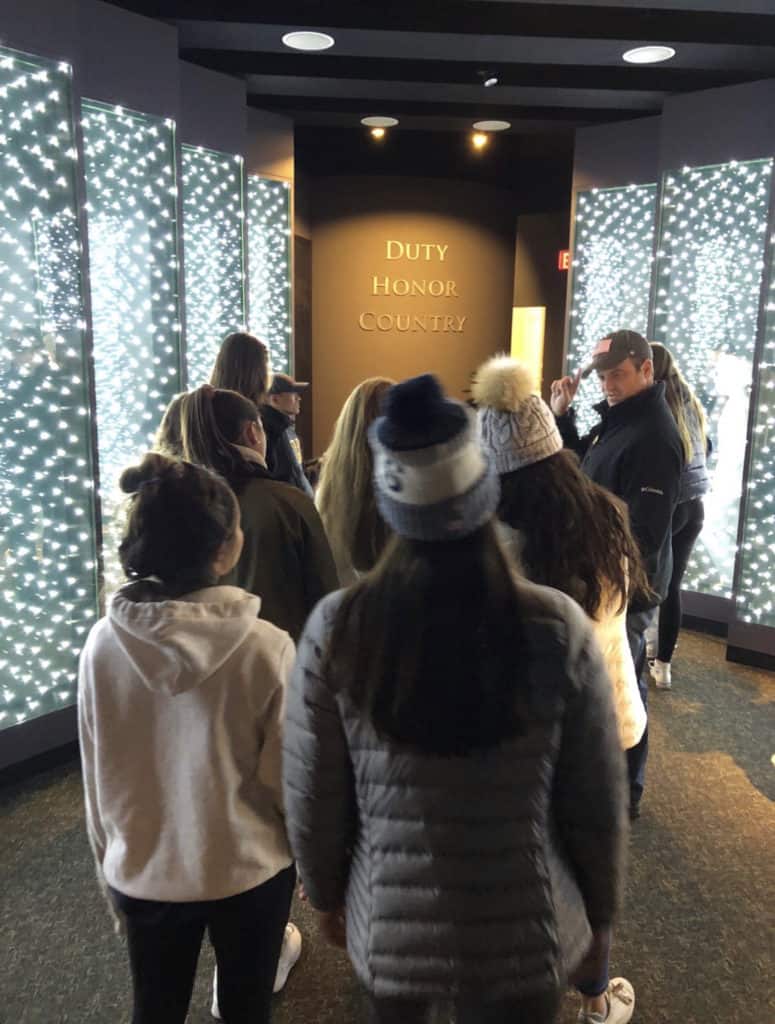 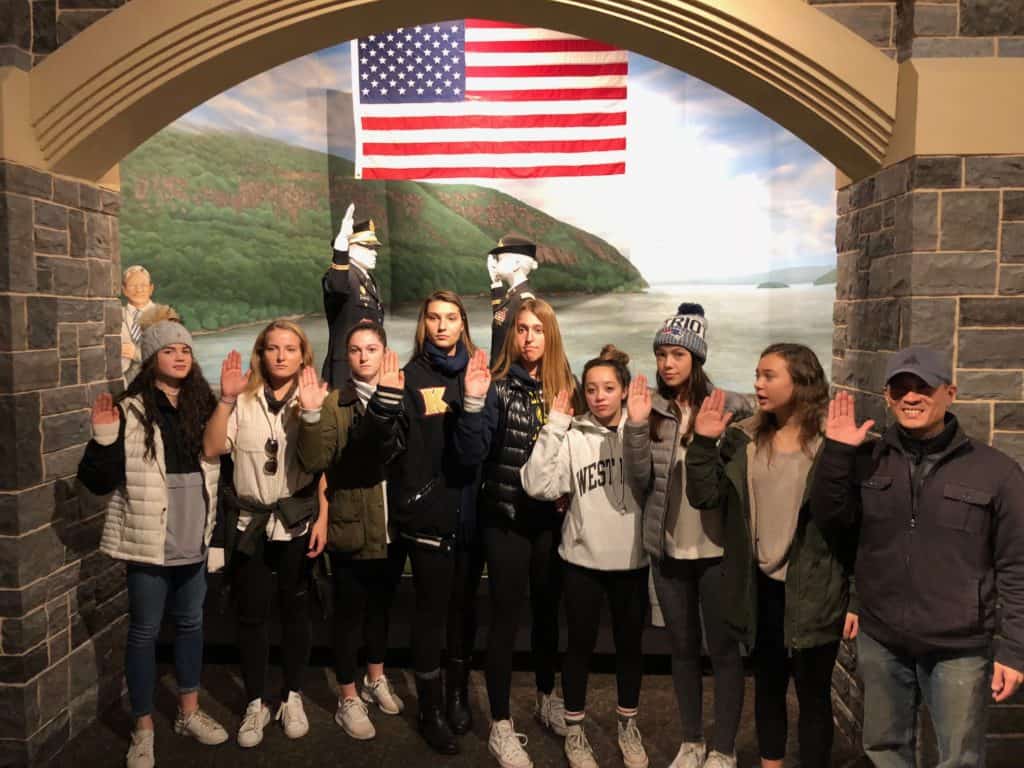 King School Volleyball team at the Visitors Center – “taking the oath as an officer to defend the U.S. Constitution”

The King team met us at the West Point Visitors Center for a tour before the Army volleyball game.  They walked through an exhibit about cadet life, then visited Trophy Point for a view of the Hudson River. They touched the links of the Great Chain which had stretched across  the river to deter British ships during the Revolution, checked out the Plain or parade grounds, and spun the spurs on Sedgwick’s Monument for good luck. After the canon was fired, we watched the military police conduct the flag ceremony at dusk. The bugler played Retreat as the crew retired the colors for the day. 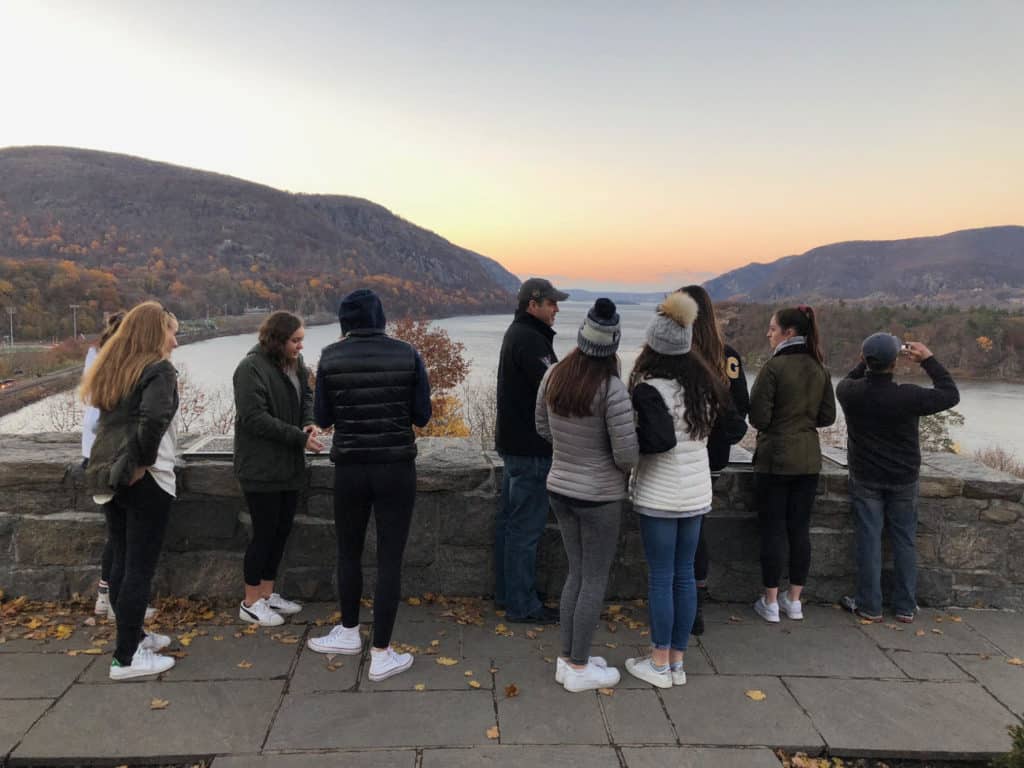 The view from Trophy Point overlooking the Hudson River 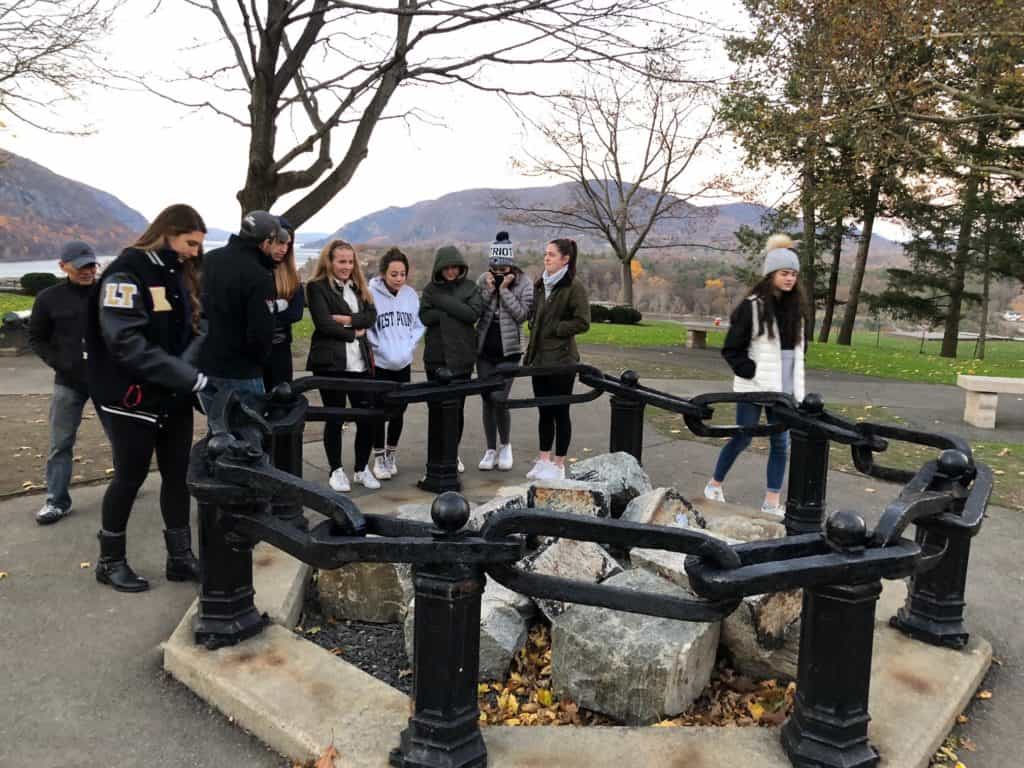 Links from the Great Chain once stretched across the Hudson River

After dinner at Eisenhower Hall, the team went down to Gillis Fieldhouse where the Army and American University volleyball teams were warming up.  The court was set up inside the 200 meter indoor track. Cara was warming up with her team in the same facility where I ran indoor track for Army 30 years ago. When we settled into the stands, a woman came over to say hi because she recognized Coach Tran.  Jeanette McMahon also coached volleyball at high school and our teams had played together. Jeanette was a retired colonel and West Point graduate of the class of 1983. She sat near my husband and me, both graduates of the class of 1991, and we cheered on the Army team as we chatted about the game. She recognized the Superintendent of West Point, Lieutenant General Williams, who loved to watch volleyball. They were classmates.

Lieutenant General Darryl Williams (Link to Office of the Superintendent bio), often referred to as the “Supe” (similar to a college President and highly decorated in battle), came over to say hello and led us in a West Point cheer, the Rocket. Jeannette, my husband and I stood and followed along, raising our arms in the air and chanting the words. Then the General introduced us to an even older graduate from the class of 1945, who was seated nearby, Brigadier General Lessey. We shook his hand and welcomed him. We figured he must be around 95 years old and had driven down from New Hampshire! He had watched the football game earlier that day and wanted to watch the volleyball game.

Here is a little about these two veterans who watched the volleyball game with us.

The Honorable Samuel Lessey, Jr. was commissioned at the end of WWII into the Army Air Corps which would become the Air Force in 1947. He flew the B-25 and served in the Army Occupation of Germany. He joined the U.S. Olympic Soccer Team in 1948, finished his law degree from Harvard, set up a course and taught military law at the Naval Academy, returned to Harvard for an MBA and was a Reagan appointee. These were a few of the things he did in his career. (Read more about Lessey here.)

Colonel Jeanette Regan McMahon flew Chinook helicopters and was married to Lieutenant Colonel Michael McMahon who was killed in Afghanistan in an airplane accident. She has three sons, who were in high school, middle school, and elementary school at the time of his death. (Read more on New York Times blog here)

Mark and I served in the U.S. Army in Germany in the final years of the Cold War and experienced the dissolution of the Soviet Union, its effects on the eastern block countries and the reunification of Germany.

Army Volleyball was having a middling season and American was seeded first in the Patriot League, having beaten Army 39 times out of 46 in the series match up, the winning Army percentage a dismal 0.152. American beat Army in three straight sets in the first meeting of the season and had won the previous five. The stands were fairly empty and the corps of cadets had pass to leave post for Veterans Day weekend. NCAA Volleyball wins are best of five matches, the fifth match a tie breaker to 15 points, win by two.

The fans, old grads and veterans screamed and cheered on the Army volleyball team.  The King players watched the teams, mouths agape and eyes wide. Inspired and itching to play, they ran to the track in between sets to bump around a volleyball. The American team had a Canadian, a Dane, a Swiss, and two Polish players on the roster; Mark joked they should change the name since they recruited all over the world.  I was losing my voice and high fiving Jeanette and Coach Tran on big plays. Army upended the number one seeded American University in a nail-biting fifth set, 16 to 14. A victory for Army on Veterans Day weekend.

Here’s the cool part of this story. The Army team ran over into a huddle with the Supe and Lessey.  They thanked Lessey for coming, the head coach hugged him, the Army team captain shook his hand, and my daughter Cara also shook his hand. The Army team had a long view at that pivotal moment, though they clearly loved volleyball: these young athletes would don the army uniform soon enough and join graduates in military units across the country and around world, like every graduate since 1802.

Upon the fields of friendly strife are sown the seeds, that upon other fields, on other days will bear the fruits of victory. General Douglas MacArthur 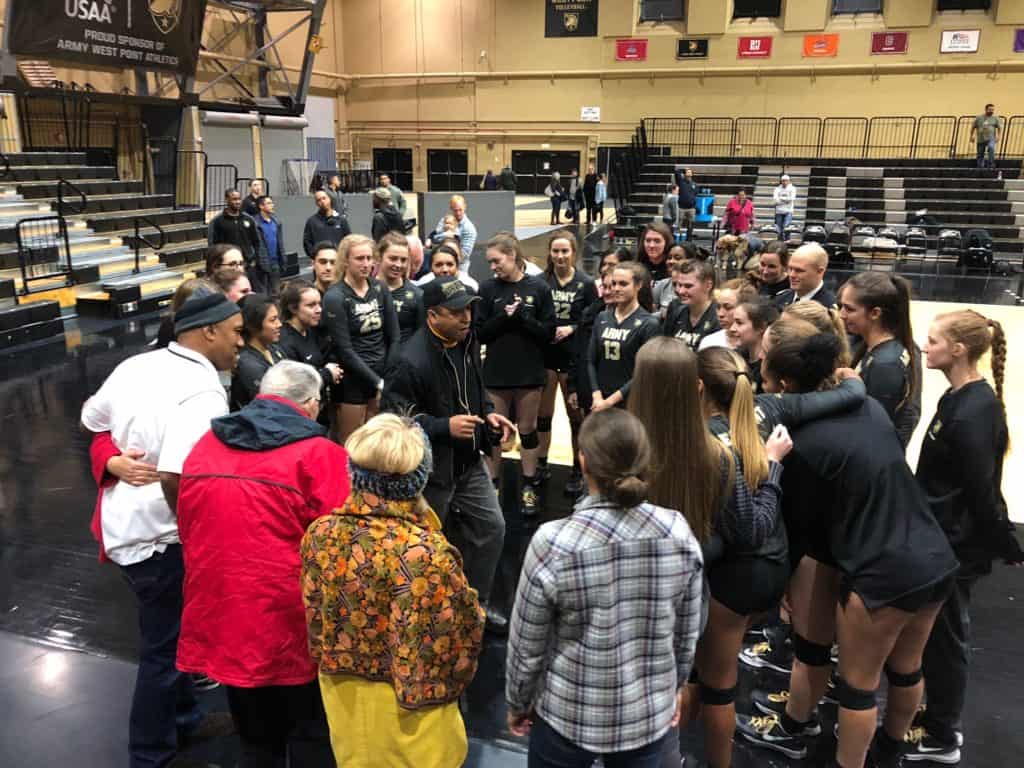 Huddle with “Supe” in white polo with ski cap and the Honorable Sam Lessey in red coat. Cara #13. 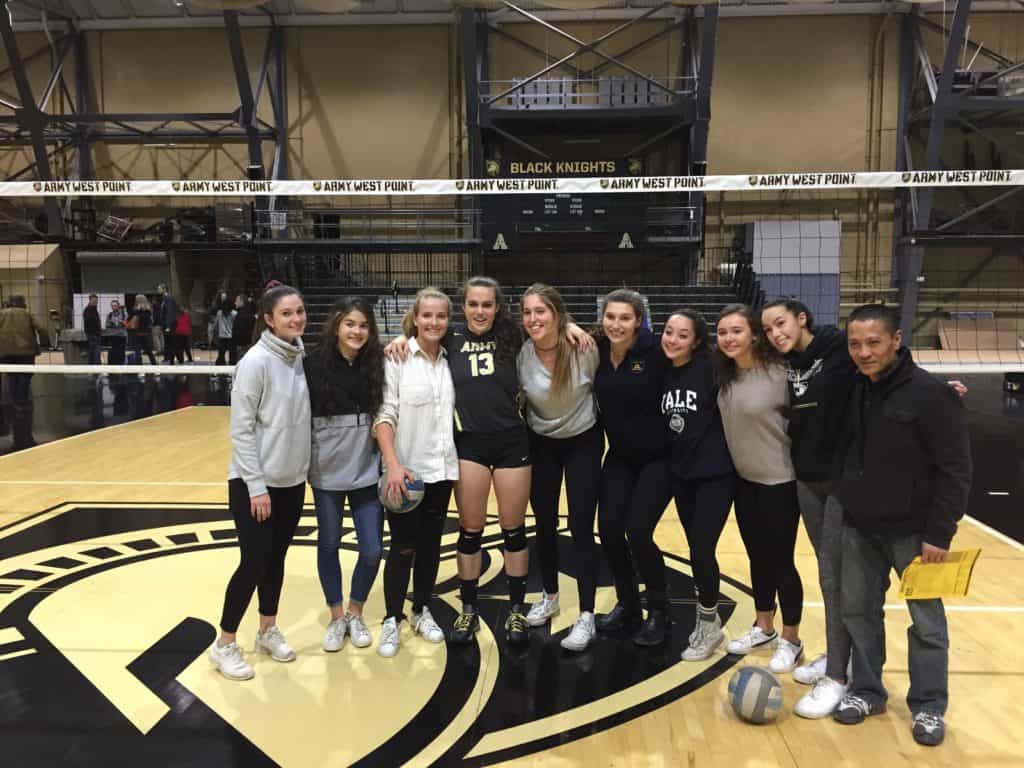 King Volleyball with Cara (13) and Coach Tran in Gillis Fieldhouse 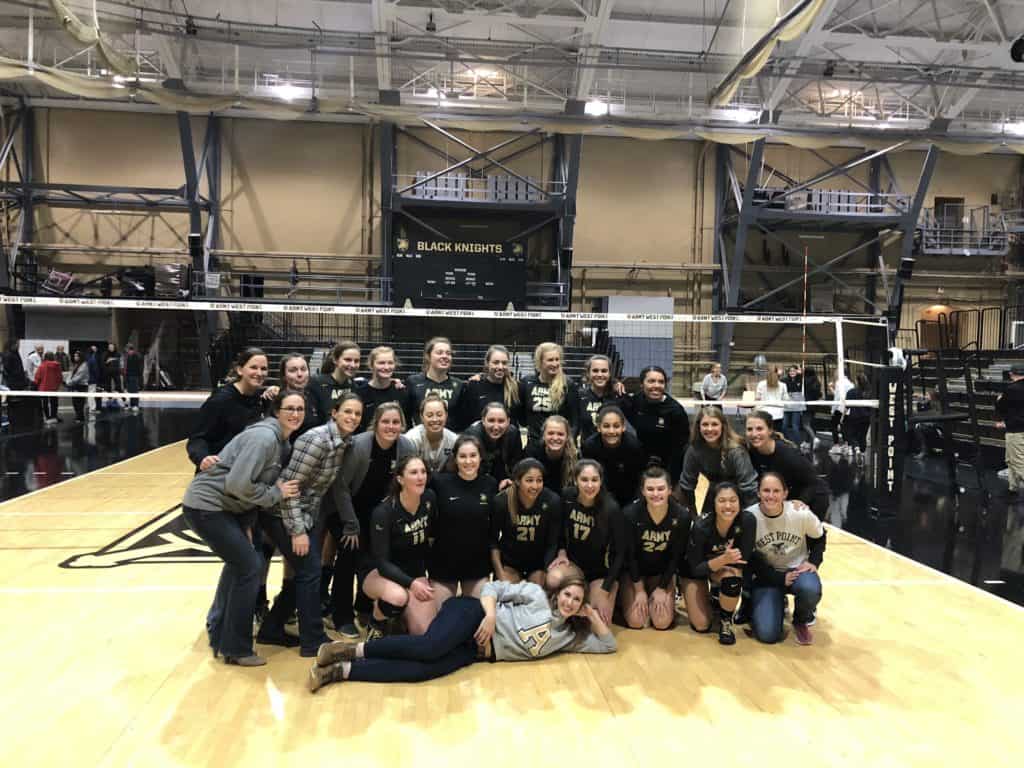 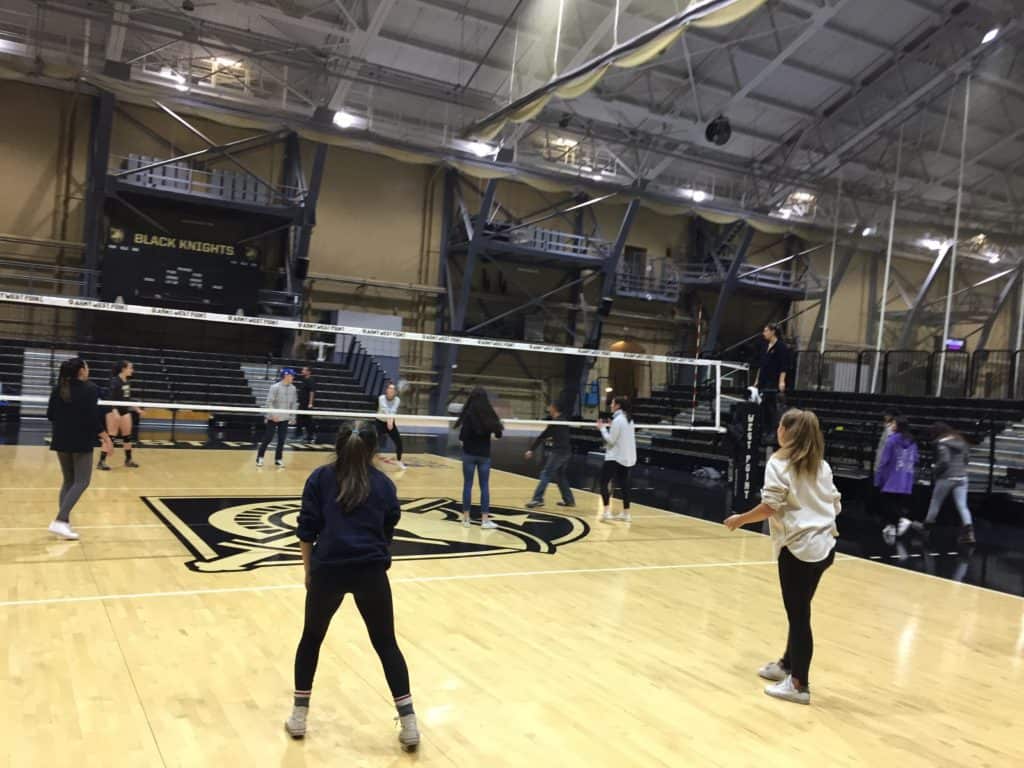 Inspired by the Army upset, King athletes play on the court late into the night!