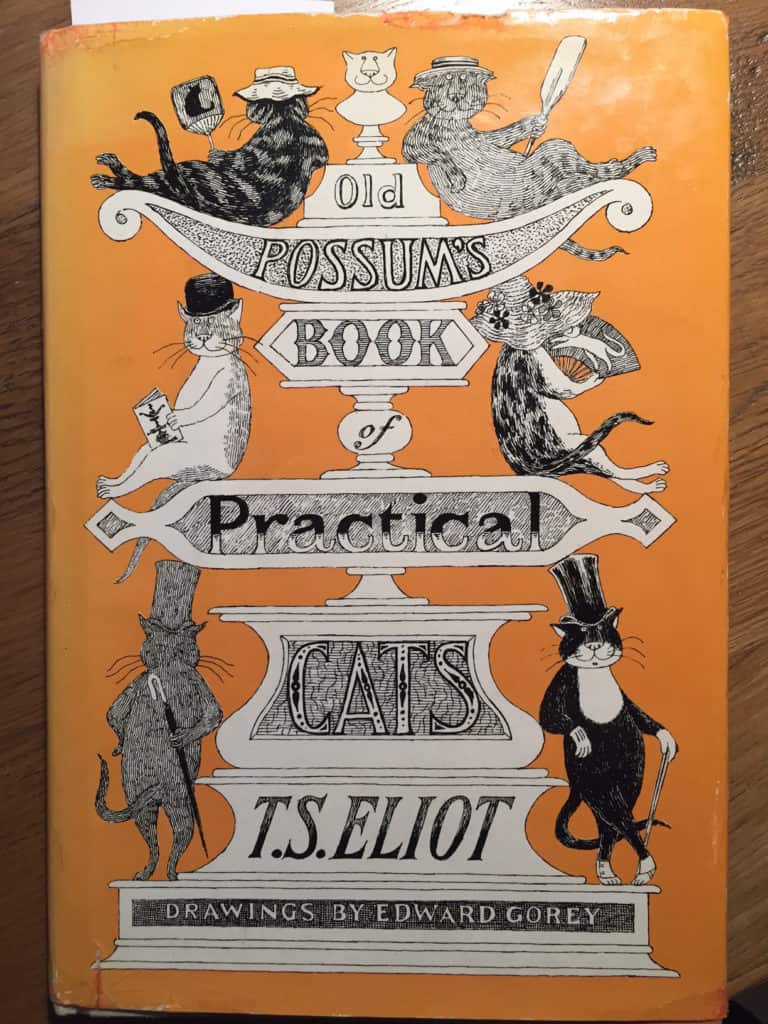 This spring cats are everywhere, in my reading, on my whiteboard, in illustrations.  I came across Old Possum’s Book of Practical Cats by T.S. Eliot in Haslams, a sprawling old book store in St. Petersburg, Florida.  The subject didn’t appeal to me and the poet was of some interest, but the cover I recognized instantly. Edward Gorey.  He illustrated Eliot’s collection of feline poems with his trademark pen and ink drawings.

My youngest child has been asking for a cat since school began last fall, pitching her case in a powerpoint presentation, pamphlets, sketches, and even a video.  This most recent scrawl on my whiteboard provided riddles with answers hidden around the room.  Her sister and I have allergies and we’re dog people, really.

The Ad-Dressing Of Cats

You’ve read of several kinds of Cat,
And my opinion now is that
You should need no interpreter
to understand their character.
You now have learned enough to see
That Cats are much like you and me
And other people whome we find
Possessed of various types of mind.
For some are sane and some are mad
And some are good and some are bad
And some are better, some are worse –
But all may be described in verse.
You’ve seen them both at work and games,
And learnt about their proper names,
Their habits and their habitat:
But
How would you ad-dress a Cat?

So first, your memory I’ll jog,
And say: A CAT IS NOT A DOG.

Now Dogs pretend they like to fight;
They often bark, more seldom bite;
But yet a Dog is, on the whole,
What you would call a simple soul.
Of course I’m not including Pekes,
And such fantastic canine freaks.
The usual Dog about the Town
Is much inclined to play the clown,
And far from showing too much pride
Is frequently undignified.
He’s very easily taken in –
Just chuck him underneath the chin
Or slap his back or shake his paw,
And he will gambol and guffaw.
He’s such an easy-going lout,
He’ll answer any hail or shout.

With Cats, some say, one rule is true:
Don’t speak till you are spoken to.
Myself, I do not hold with that –
I say, you should ad-dress a Cat.
But always keep in mind that he
Resents familiarity.
I bow, and taking off my hat,
Ad-dress him in this form: O CAT!
But if he is the Cat next door,
Whom I have often met before
(He comes to see me in my flat)
I greet him with an OOPSA CAT!
I’ve heard them call him James Buz-James –
But we’ve not got so far as names.
Before a Cat will condescend
To treat you as a trusted friend,
Some little token of esteem
Is needed, like a dish of cream;
And you might now and then supply
Some caviare, or Strassburg Pie,
Some potted grouse, or salmon paste –
He’s sure to have his personal taste.
(I know a Cat, who makes a habit
Of eating nothing else but rabbit,
And when he’s finished, licks his paws
So’s not to waste the onion sauce.)
A Cat’s entitled to expect
These evidences of respect.
And so in time you reach your aim,
And finally call him by his NAME.

So this is this, and that is that:
And there’s how you AD-DRESS A CAT. 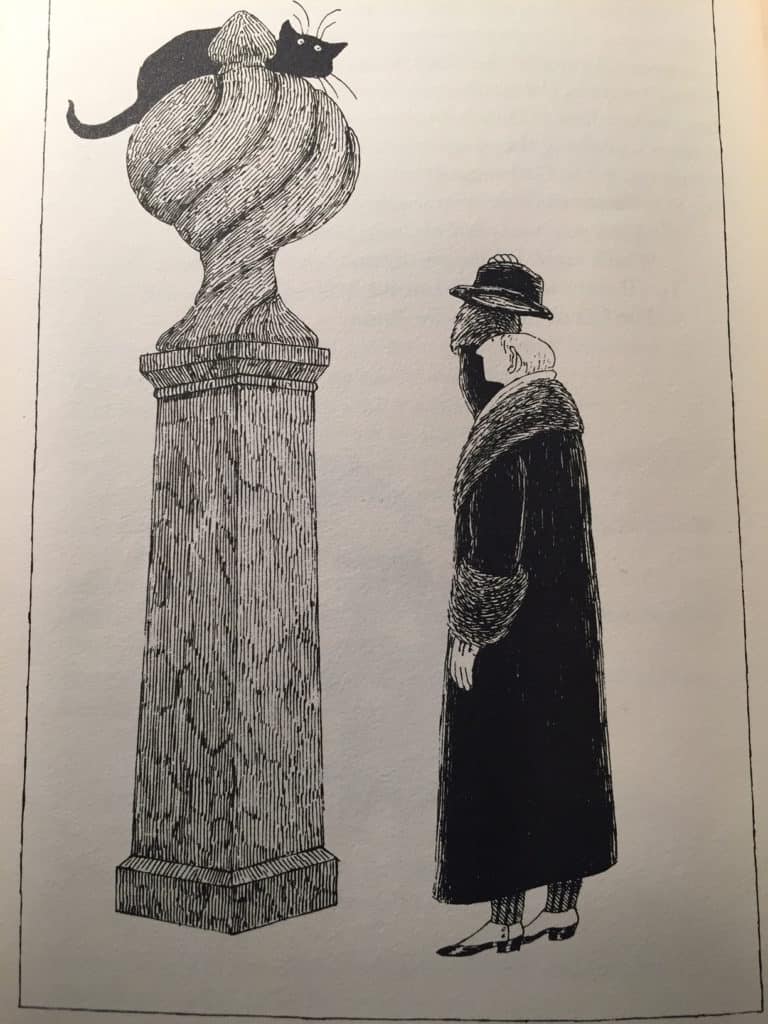 Edward Gorey’s illustration shown opposite the poem, The Ad-Dressing of Cats

The Naming of Cats

by T.S. Eliot
The Naming of Cats is a difficult matter,
It isn’t just one of your holiday games;
You may think at first I’m as mad as a hatter
When I tell you, a cat must have THREE DIFFERENT NAMES.
First of all, there’s the name that the family use daily,
Such as Peter, Augustus, Alonzo, or James,
Such as Victor or Jonathan, George or Bill Bailey —
All of them sensible everyday names.
There are fancier names if you think they sound sweeter,
Some for the gentlemen, some for the dames:
Such as Plato, Admetus, Electra, Demeter —
But all of them sensible everyday names.
But I tell you, a cat needs a name that’s particular,
A name that’s peculiar, and more dignified,
Else how can he keep up his tail perpendicular,
Or spread out his whiskers, or cherish his pride?
Of names of this kind, I can give you a quorum,
Such as Munkstrap, Quaxo, or Coricopat,
Such as Bombalurina, or else Jellylorum —
Names that never belong to more than one cat.
But above and beyond there’s still one name left over,
And that is the name that you never will guess;
The name that no human research can discover —
But THE CAT HIMSELF KNOWS, and will never confess.
When you notice a cat in profound meditation,
The reason, I tell you, is always the same:
His mind is engaged in a rapt contemplation
Of the thought, of the thought, of the thought of his name:
His ineffable effable
Effanineffable
Deep and inscrutable singular Name.
Here’s another I came across in Billy Collin’s new collection.

It takes only a minute

to bury a wren.

The cat at the threshold

to stay in or go out.

It is April which is poetry month, inspired I assume by yellow forsythia bursts and pink plum petals, and not so much the tree, grass, and weed pollen. The latter is kind of like cats, at least to this simple soul.  Guffaw. Guffaw. 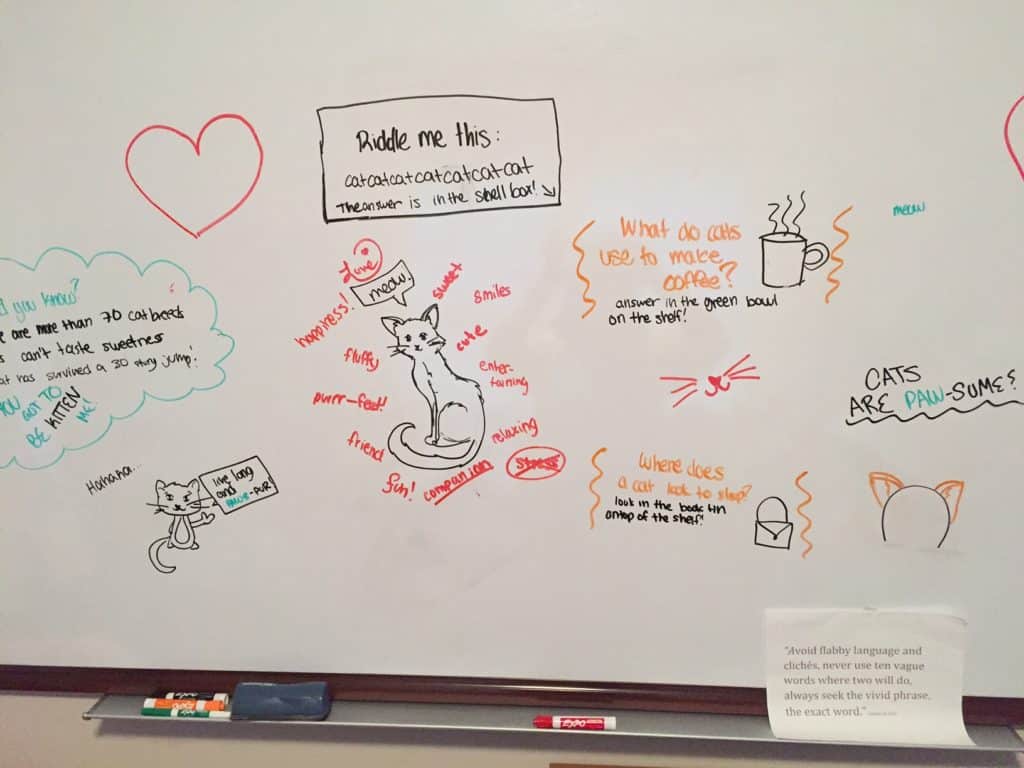 Cat riddles and puns for the intransigent Dog parent, from the cat crazy child.  “Cats are PAW-some. You got to be KITTEN me!”