The shooting range was set up for the use of handguns and rifle using handgun ammunition from 22LR through 45 ACP (long rifle and automatic colt pistol), not most long arms.  My brother brought both handguns and rifles to the range and he had to return the long arms to the truck. He was concerned about leaving them outside the facility.

“Do you think they will be safe in the truck?”

The owner said, “Are you serious? We haven’t had a theft here.”

Thinking that over made sense.  Right. Criminals target gun free zones.  Let’s talk about the range and NOT the politics, but here’s a link (Why Terrorists Target Gun Free Zones) for the curious.

Virginia ranks in the middle for best states for gun owners and my home state Connecticut ranks near the bottom (45th) (Best States for Gun Owners 2015, Guns & Ammo).  In Virginia, shooters buy ammunition at the local Walmart, take their handguns, rifles, and children to the range where they can sign a waiver for children 7 and up and practice marksmanship under the supervision of an adult. The website lists an upcoming event for “Pistol Packing Ladies.”

My children have grown up with military parents and uncles, and my oldest is considering attending West Point.  My three teens and their cousins learned to shoot various pistols and a 22LR at the range. The experience was not new, because most had fired off a back porch before and all had fired airguns.

In the army, service members qualify on their assigned weapon on a regular basis. Many of us learned how to operate a shooting range for soldiers as well as instruct them on marksmanship, weapons cleaning, and storage. It is called a profession of arms for a reason.

My teenagers expressed an interest in shooting and we felt it was time for them to learn. 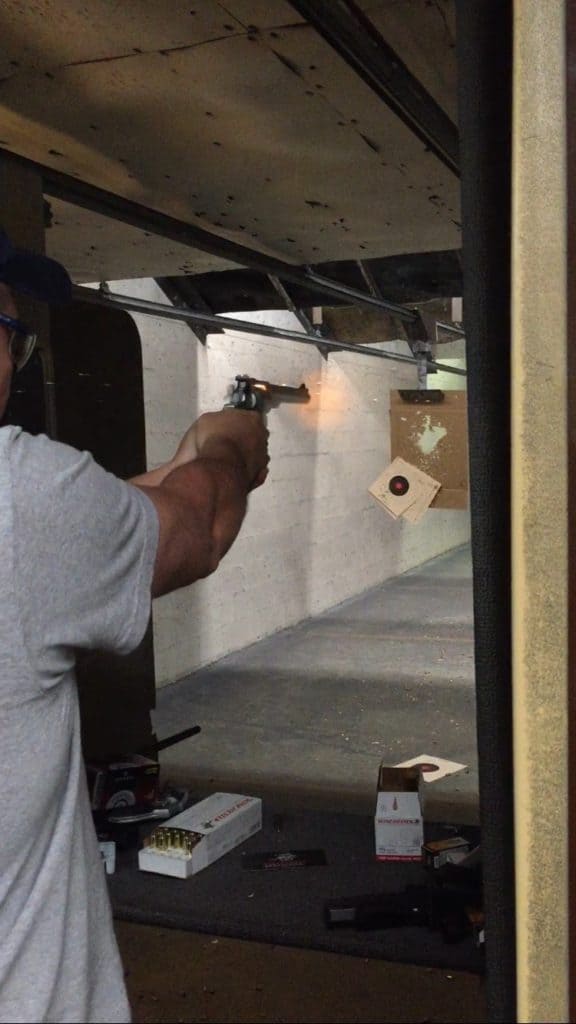 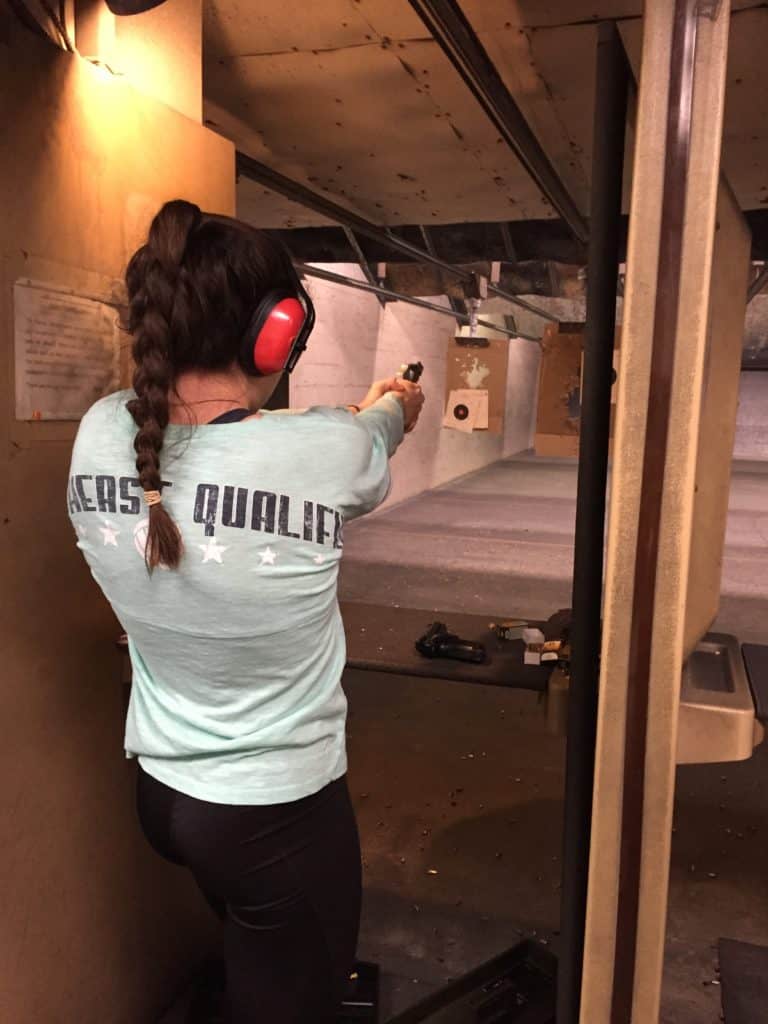 My oldest is firing a .38 Special pistol. She participated in hands-on weapons training at West Point last summer.

** A good primer from Michigan Hunter Ed, Differences Between Rifles, Shotguns, and Handguns. 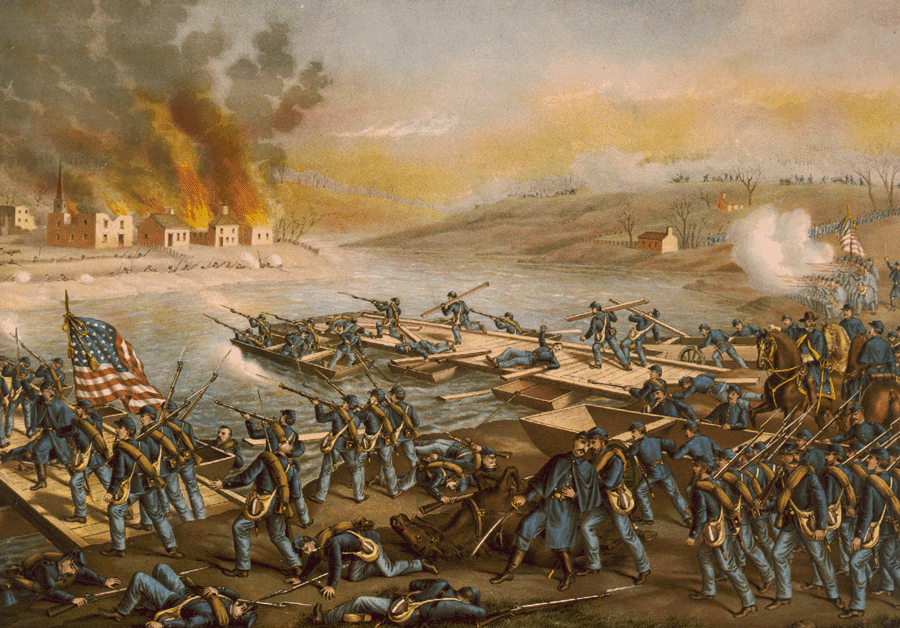 Army of the Potomac crossing the Rappahannock River on December 13, 1862.

The next day we visited the Fredericksburg Battlefield Visitor Center. James Earl Jones narrates the 22 minute film in the center’s theater and that alone is worth the visit. My elderly mother cried throughout, asking if the footage and actors were real. I tried to explain. No they weren’t, but yes the people who actually fought were. The museum was enclosed in a brick manor house constructed by the Civilian Conservation Corps in 1936.

We viewed the exhibits and walked by the famous Sunken Road and the wall along Marye’s Heights where General Robert E. Lee and Thomas J. “Stonewall” Jackson held the advancing Union troops.  The Union had taken the town below after crossing the Rappahannock River, a task that proved daunting. The delay of the pontoon boats allowed Lee to fortify the high ground, creating one of the strongest defensive positions of the campaign and a stirring victory for the confederates. General Ambrose Burnside sent six divisions across the open fields against Lee’s entrenched superior fighting position, ultimately covering the grounds with Union dead and wounded, one of the bloodiest battles of the Civil War.

Burnside wept openly at the disastrous outcome for the Union and Lee said this to his subordinates. “It is well that war is so terrible. We should grow too fond of it.”

A monument is erected along the wall to the “Angel of Marye’s Heights”, a confederate soldier so dubbed because he brought water to dying union soldiers, at risk to his own life. Even in this most horrific battle, the fields covered in blood, the cries and screams of pain, the wrench of human filth in the air, there is goodness and kindness. Richard Kirkland’s story stung at my eyes and I remember this single man’s deeds as clearly as anything else I learned at the center. 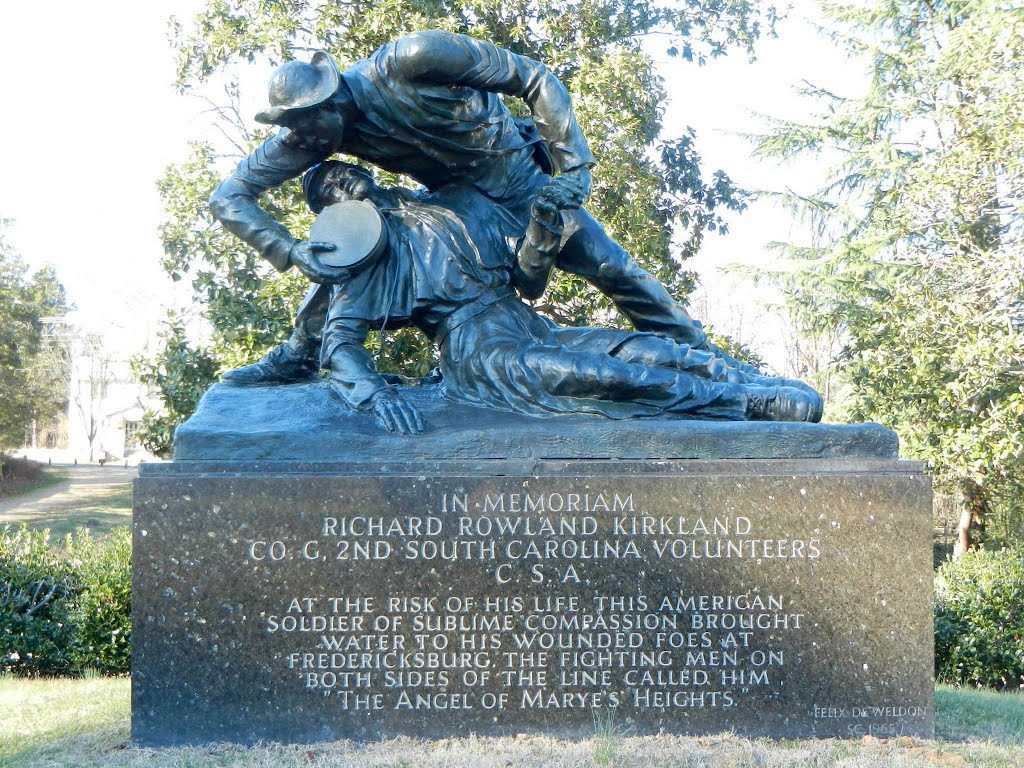 We stopped by an antique store, Slaughter Pen Farm Battlefield, and George Washington’s boyhood home, Ferry Farm; it was Presidents’ Day weekend after all. This was a distinctly Virginian weekend, a battlefield state then and now.

War and battle and fighting were common themes during the visit and guns play a central role to all three. Our founding fathers recognized the right of the people to bear arms for good reason, second only to the freedom of speech and religion, and followed shortly after with the right to privacy (2nd, 1st, 4th amendments). The concept of a non-violent world is an illusory ideal and reminds me of a passage I read recently in Voltaire’s Candide.

“Do you believe,” said Martin, “that hawks have always eaten pigeons when they have found them?”

“Yes without a doubt,” said Candide.

“Well then,” said Martin, “if hawks have always had the same character why should you imagine that men have changed theirs?”  (XXI, Candide by Voltaire)

But men aren’t hawks, some argue.  And men aren’t wolves or sheep or sheepdogs either. (Link to Sheepdog parable)  But men are men, singular and complex, good and evil, corrupt and benevolent, flawed and generous.  As long as there are men, there will be crime, there will be violence, there will be threats.  And this recalls the old adage, “Abe Lincoln may have freed all men, but Sam Colt made them equal.”