A Toast for All Times – Weddings & Graduations – Marcus Aurelius

The flight to Seattle from JFK was perfect, a clear day across most of the country.  I had a window seat behind the wing on the left side of an Airbus 320, or the south side going west, giving me a bird’s eye view of the good old U.S. of A. My neighbor slept and most watched television or their devices, a few read books like me.

The view from 37,000 feet was spectacular and went well with my book, The Essential Marcus Aurelius, a world view and words from a worldly man, one of history’s greats, the philosopher king. I finished his twelve “books” on the flight. They are short chapters but packed with philosophy and wisdom and experience, so I found myself taking in passages and gazing at the world below.

The flight trajectory spans the coasts through Michigan and the Great Lakes, the border states, Minnesota, North Dakota, Montana and Idaho, until reaching Washington.  The lakes were defined shades of blue, and light green near the land. It reminded me of Huck Finn and Tom Sawyer in the hot air balloon, thinking I must have been above Michigan because it was green.  You know, Wisconsin is red, Minnesota is yellow.  (Mark Twain’s Tom Sawyer Abroad)

On Being Human & the Cosmos

In Book Four, Aurelius explores what it means to be human, that we are part of the Cosmos, and that the Cosmos is part of us.  “People seek retreats for themselves in the country, by the sea, and near the mountains …. but this is a sign of ignorance, since you have power to retire within yourself whenever you wish.”  There’s  Buddhist thought in this and I wonder if Aurelius had heard of the Buddha who lived six centuries before he lived. Our Reason or intellect unites us as a species, and the greatest community of man, the Cosmos, unites us as rational beings, that it “has been arranged in an entirely well ordered way, or has come together by chance, but nevertheless remains an ordered whole, a Cosmos.” (Book 4.3)

I couldn’t doubt such an assertion from seat 20A on a JetBlue flight. All was right in the world.  Aurelius never flew on a jet plane and he knew this.

Looking at Lake Erie below made me think of my friend Kate and her childhood home in Buffalo, that the land shapes people, that geography, despite personality or interest or even blood lines, is the number one factor in human relationships. What was it like growing up by the Great Lakes? How did that affect recreation, friendships, a life?

My friend Di lives in southern Minnesota, which is the other side of the state from Lake Superior but close to the Mississippi River. After passing over Lake Michigan and Green Bay Wisconsin, clouds covered the next stretch of the trip. It felt nice to know, miles above, that my friend lived below. I remembered driving through lots of corn fields to her home once and I texted her when I arrived in Seattle, asking if the weather cleared that day, feeling closer to her, having seen the tops of the clouds with my own eyes. It cleared up and I could see the green and brown checkerboard farm land of the Plains in Minnesota and North Dakota, dark rivers and tree lines snaking their way through patchwork. 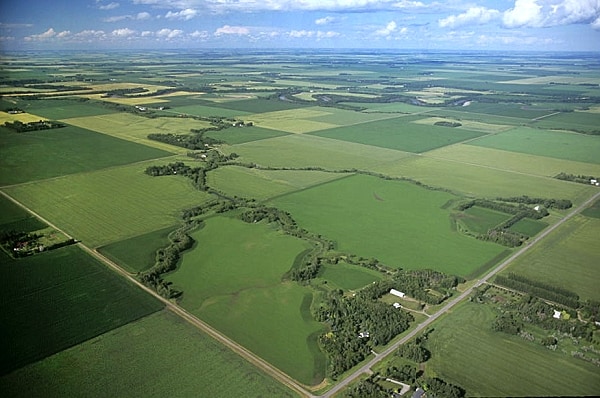 Aurelius wrote in his Meditation, that to stand apart from the Cosmos is an “amputation from the community” because we are all connected.  Humans are rational and social beings. I felt connected to this land, not just because my friend lived there but because we as a people live there, moved there, settled there, farmed the land, made a living.

The flat plains landscape broke into hills and mountains as we flew west into the Rockies of Montana.  Almost there.  The white capped mountains of Rainier and the Cascade Range rose up like icebergs. It was glorious, God-like, to see our country from above, coast to coast, in 300 minutes. 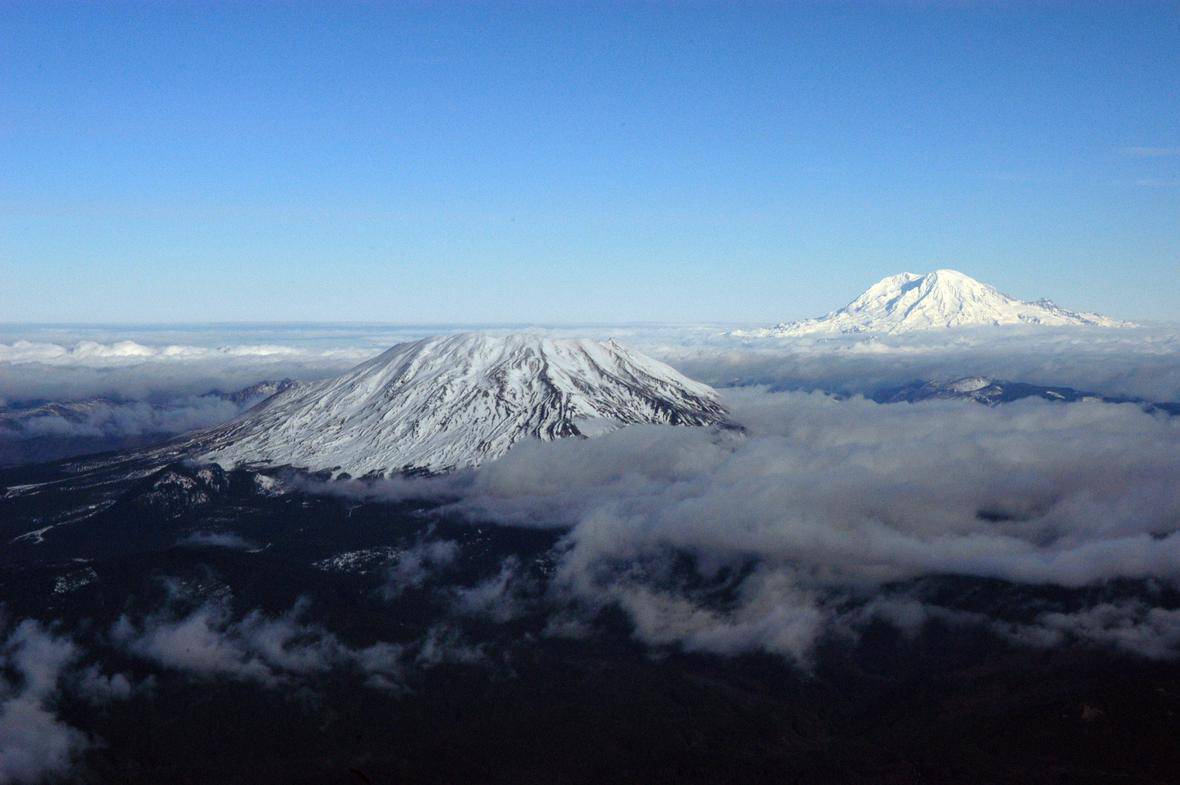 A TOAST FOR ALL TIMES

My mother’s family is large and she was not attending the wedding, so I was the only one representing our branch of the family from the east coast. My cousins asked me to make a toast in the past and I had a lot to think about from the flight in case they asked me again.  It was great to escape the hectic and competitive northeast culture, plus the five hour journey was a welcome break, anticipating the reunion with my cousins, the food, the fun. The physical journey with its grand views and the words of the philosopher king were timely.

Aurelius shared a lot of things in his private “meditations,” but this seemed fitting counsel to anyone.

Stop philosophizing about what a good man is and be one. (Book 10. 16)

Just what does that mean?  It’s a little and a lot, in the way that understanding such a statement is simple enough, but practice requires great skill and wisdom, for most, a lifetime. The question follows of just how to be a “good person” and Aurelius wrote about three traits. Believing that every human possesses the ability to be good, he wrote that you must guard “your freedom each and every hour with kindness, simplicity, and self-respect.” ( Book 8.51)

Kindness is in the ability of every one of us, even when and especially when, faced with unkindness and shameless people. Be kind to the villain, the liar, and everyone who has gone astray. “What power has Nature given us for dealing with such a people? For She has given us kindness as an antidote for the arrogant, and other faculties for dealing with other difficulties.”  ( Book 9.42)

Simplicity is a topic he discussed throughout his meditations and is rooted in his Stoic beliefs. Avoid the common trappings of greed, luxury, power. The third trait is self-respect. Respect the self, the mind, and when you observe disrespectful behavior, examine your own behavior, evaluate yourself.

So this time of year, when school ends and summer begins, with its weddings, graduations, commencement speeches, and toasts, consider the best writings of ancient philosophy and what it means to be human, to do good, to love. Here’s wise counsel for the grad, the newlyweds, or anyone just taking it one day at a time.

Whether you live in Seattle near the Cascade Mountains, the northeast, or by the Great Lakes, choose to be a good person, do good things, and live a life of kindness, simplicity, and respect.

And, by the way, next time you book a flight, reserve the window seat. 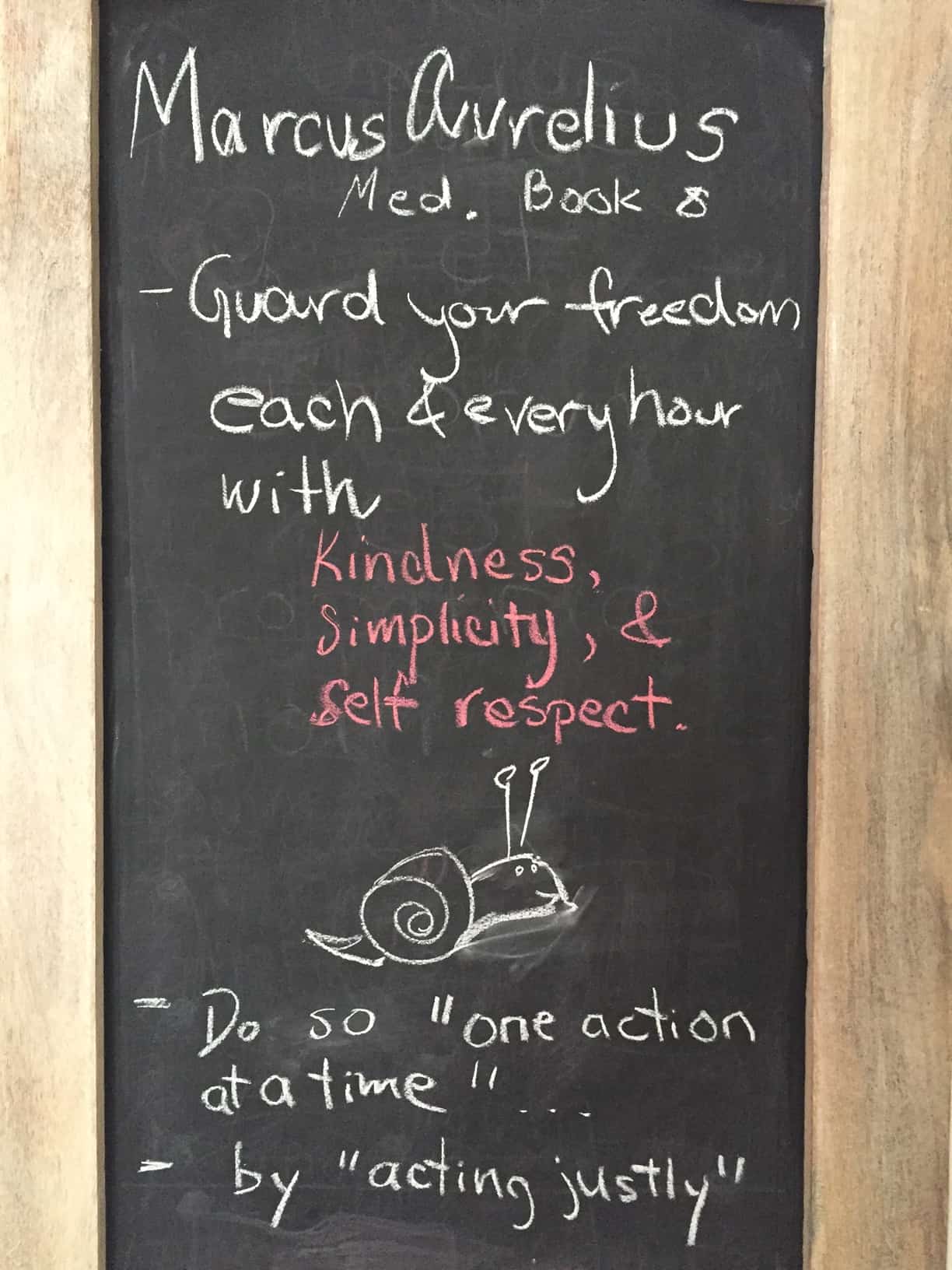