Where Are the Tough Teachers? Mediocre Music & Why We Need Mr. K

I drove to my son’s winter concert listening to Yo-Yo Ma’s holiday album with musicians Chris Botti on trumpet and Natalie MacMaster on fiddle. I wanted to get into the holiday spirit, but perhaps I set myself up for disappointment.

The school’s preparatory ensemble squeaked out method pieces like Ode to Joy, Dreidel and Jingle Bells.  The conductor explained that they were new to their instruments, so families in the audience were happy enough to see their child on stage and recognize the tunes.

Following this, the conductor told us the next group of students auditioned to play in the concert ensemble, so after listening to the newbies and that introduction, I admit, I had expectations.  That didn’t last long.  The performance was mediocre, to be kind.  The audience applause was noticeably thin, because others reacted as I did. The timing was off, pitches were off, they rambled along.  The 40 person group resembled a band but included three violinists, a keyboardist, and no clarinets, though there were seven trumpeters; it appeared an ad hoc group and I could not hear the strings.

The evening wasn’t a complete disappointment as the jazz group had talent with soloists performing riffs to a Duke Ellington standard.  These were dedicated students and reflected the conductor’s background in jazz. The audience clapped along with their rendition of All I Want for Christmas.

On the way home, I asked my son about his previous school’s band. He said there was no comparison: at his last school, they played music two or three years ahead of what he was working on now and each week they had small breakout sessions with his conductor.  His last school had an award winning band.  It was also a large school and that has its advantages, though a small school could theoretically allow for more time per student. 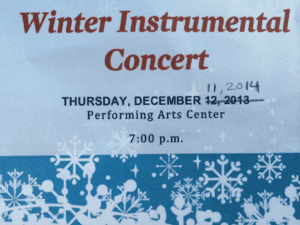 Program with last year’s date and my correction

This made me think about the details.  The date was off.  The year was off.

Maybe that’s why the timing was off.  And the pitch was off.  Details, discipline, and expectations matter, whether it is creating an accurate program or conducting young musicians to give a good, maybe even excellent, performance.

The concert and my son’s experience reminded me of a column I read.  A former student wrote about her conductor, a Mr. K, who was the “the meanest man [she] ever met” and “He was so loud that the football players running laps around the outside of the building would catch snippets of his shouted commands every time they passed. “Who eez deaf in first violins?” you’d hear him yell.”

We need more teachers like Mr. K, but ask yourself if such a person can exist in today’s educational system. In this high self-esteem, school climate compliant, humanistic, standardized model, just where would we find him?

Read about the famous or infamous Mr. K, though you might want to grab a tissue.

And the Orchestra Played On

The other day, I found myself rummaging through a closet, searching for my old viola. This wasn’t how I’d planned to spend the afternoon. I hadn’t given a thought to the instrument in years. I barely remembered where it was, much less how to play it. But I had just gotten word that my childhood music teacher, Jerry Kupchynsky — “Mr. K.” to his students — had died.

In East Brunswick, N.J., where I grew up, nobody was feared more than Mr. K. He ran the town’s music department with a ferocity never before seen in our quiet corner of suburbia. In his impenetrably thick Ukrainian accent, he would berate us for being out of tune, our elbows in the wrong position, our counting out of sync.

“Cellos sound like hippopotamus rising from bottom of river,” he would yell during orchestra rehearsals. Wayward violinists played “like mahnyiak,” while hapless gum chewers “look like cow chewing cud.” He would rehearse us until our fingers were callused, then interrupt us with “Stop that cheekin plocking!”

Mr. K. pushed us harder than our parents, harder than our other teachers, and through sheer force of will made us better than we had any right to be. He scared the daylight out of us.

I doubt any of us realized how much we loved him for it.

Which is why, decades later, I was frantically searching for an instrument whose case still bore the address of my college dorm. After almost a half-century of teaching, at the age of 81, Mr. K. had died of Parkinson’s disease. And across the generations, through Facebook and e-mail messages and Web sites, came the call: it was time for one last concert for Mr. K. — performed by us, his old students and friends.

Now, I used to be a serious student. I played for years in a string quartet with Mr. K.’s violin-prodigy daughters, Melanie and Stephanie. One of my first stories as a Wall Street Journal reporter was a first-person account of being a street musician.

But I had given it up 20 years ago. Work and motherhood intervened; with two children and long hours as an editor, there wasn’t time for music any more. It seemed kind of frivolous. Besides, I wasn’t even sure I would know how.

The hinges creaked when I opened the decrepit case. I was greeted by a cascade of loose horsehair — my bow a victim of mites, the repairman later explained. It was pure agony to twist my fingers into position. But to my astonishment and that of my teenage children — who had never heard me play — I could still manage a sound.

It turned out, a few days later, that there were 100 people just like me. When I showed up at a local school for rehearsal, there they were: five decades worth of former students. There were doctors and accountants, engineers and college professors. There were people who hadn’t played in decades, sitting alongside professionals like Mr. K.’s daughter Melanie, now a violinist with the Chicago Symphony Orchestra. There were generations of music teachers.

They flew in from California and Oregon, from Virginia and Boston. They came with siblings and children; our old quartet’s cellist, Miriam, took her seat with 13 other family members.

They came because Mr. K. understood better than anyone the bond music creates among people who play it together. Behind his bluster — and behind his wicked sense of humor and taste for Black Russians — that was his lesson all along.

He certainly learned it the hard way. As a teenager during World War II, he endured two years in a German internment camp. His wife died after a long battle with multiple sclerosis. All those years while we whined that he was riding us too hard, he was raising his daughters and caring for his sick wife on his own. Then his younger daughter Stephanie, a violin teacher, was murdered. After she vanished in 1991, he spent seven years searching for her, never giving up hope until the day her remains were found.

Yet the legacy he had left behind was pure joy. You could see it in the faces of the audience when the curtain rose for the performance that afternoon. You could hear it as his older daughter Melanie, her husband and their violinist children performed as a family. You could feel it when the full orchestra, led by one of Mr. K.’s protégés, poured itself into Tchaikovsky and Bach. It powered us through the lost years, the lack of rehearsal time — less than two hours — and the stray notes from us rustier alums.

Afterward, Melanie took the stage to describe the proud father who waved like a maniac from a balcony in Carnegie Hall the first time she played there. At the end of his life, when he was too ill to talk, she would bring her violin to his bedside and play for hours, letting the melodies speak for them both. The bonds of music were as strong as ever.

In a way, this was Mr. K.’s most enduring lesson — and one he had been teaching us since we were children. Back when we were in high school, Mr. K. had arranged for Melanie and our quartet to play at the funeral of a classmate killed in a horrific car crash. The boy had doted on his little sister, a violinist. We were a reminder of how much he loved to listen to her play.

As the far-flung orchestra members arrived for Mr. K.’s final concert, suddenly we saw her, that little girl, now grown, a professional musician herself. She had never stopped thinking about her brother’s funeral, she told me, and when she heard about this concert, she flew from Denver in the hope that she might find the musicians who played in his honor. For 30 years, she had just wanted the chance to say, “Thank you.”

As did we all.

Joanne Lipman, a former deputy managing editor at The Wall Street Journal, was the founding editor in chief of Condé Nast Portfolio magazine. (link to column)

Joanne Lipman co-wrote a book with Mr.K’s daughter, Melanie Kupchynsky, and it is titled Strings Attached: One Tough Teacher and the Art of Perfection.  You can read the first chapter at this link. The book was published in 2013 and available in paperback this year, 2014. 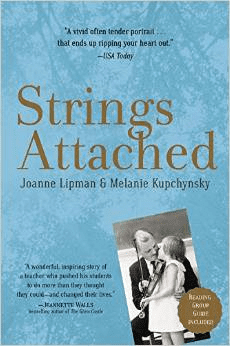 The New Words Are In, Merriam-Webster Dictionary

2 Min read 13 New words Late to Coffee with a Baker's dozen * New words are in. And, 370 words have been added to the Merriam-Webster Dictionary this September. You likely know many and below are some of my favorites. The editors break them down by category, but I...

Bringing Writers and Readers Together: Why I Write

2 Min read Short Take Creative process For writers and readers AVAILABLE ON PODCAST Spotify iTunes * Maybe the better way to think of this letter is, why you read TreeHouseLetter. For me, it's about why I write. Which, are two sides of the same coin. I updated my site...

“Old Age is Not for the Young”*

6 Min read 2 Book recs, by elderly writers Serial comma 10,000-hour-rule Explicit language, 13 to 103 AVAILABLE ON PODCAST Spotify iTunes * If you believe 10,000 hours of practice will help achieve mastery, say, on the violin or as a volleyball player, then the...

5 Min read 17 Books, 19.5 including mentions in footnotes Genres: Memoir, Essays, Fiction, Writing, Love, Poetry, War Toolbox, Texture in writing Contemporary and classic books from the top of my stacks, my more current reading. * The most common question I get is,...