The name Josui Sakai sounds lovely; it rolls nicely on the tongue, JOH SOOEY  SAH  KAI.  Josui left the United States with her parents during WWII to avoid being placed into the Japanese American internment camps, a decision her father made. American born and raised for 15 years of her life, Josui was American in a Japanese body. As a young woman in Japan, she fell in love with an officer named Allen Kennedy whose wealthy Virginian mother denied their marriage. The mother found support for her refusal in the law, because it was illegal to marry a ‘non-white’ and lawyers interpreted Japanese as ‘non-white’ in that state.

Pearl Buck’s writing is beautiful and powerful, drawn from the culture of her childhood spent in China where her parents were missionaries. The first American woman to receive the Nobel Prize for Literature, Buck was also “the first person to make China accessible to the West.”  (Pearl Buck in China, Hilary Spurling) When I think of Buck, I have flashbacks to sophomore English class with a toad of a teacher who sucked away the joy in her prose. But this book, The Hidden Flower, changed that impression with its story, its authenticity, and its insights.  Buck published the book in 1952, so the war and its wounds were still raw. It’s easy to forget just how much has changed in 60 years, but the Civil Rights Act wasn’t passed yet and interracial marriage was not fully legalized until 1967! 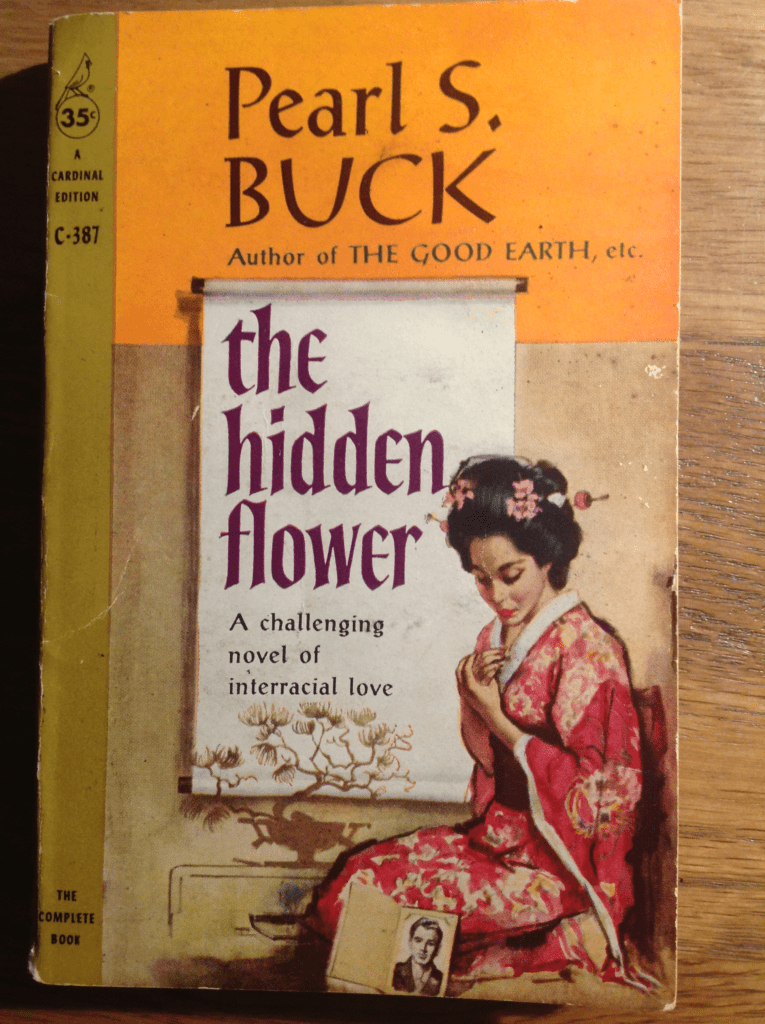 The Hidden Flower by Pearl Buck, 1952

Interracial marriage was illegal in most states, and it was socially taboo. Think of this, only a third of Americans even viewed it as acceptable in 1986 (NYTimes Pew Study -Interracial Marriage Seen Gaining Wide Acceptance).  Buck makes it painfully clear how pervasive racism was. Here the commander struggles with Allen Kennedy’s love for Josui.

He had put a lot into Kennedy, time and advice and liking. He was angry that it might all be wasted on a Japanese girl. . . . He didn’t believe in mixing the races. Already there were thousands of half-American Japanese babies, thousands of half-American Chinese babies, just as in India there were thousands of thousands of half-English Indian babies. It was one of the accursed accompaniments of war and even the Pentagon could not lick the problem. While they were trying to keep America safe for the Americans, the men themselves were undermining the whole idea. Even Kennedy! Lust he could understand, when men were in a foreign country, but marriage! (Part I, p. 103)

Virginia did not recognize the Japanese Buddhist marriage and Josui, an American by birth, could not remain Kennedy’s wife in Virginia. Plus her mother-in-law refused to see her or acknowledge her existence. So the young couple chose to live in New York City.

And then there was a pregnancy, though Allen never knew of it, and Josui was desperate for many reasons. Allen’s mother rejected her, the law rejected her, society rejected her, and there were no options.

It was too late. Also he [the doctor] did not do that sort of thing. She was almost glad, after all. It was not fair to the child to destroy him before he was born. It was not his fault that he was a world child. This was his destiny. (Part III, p. 175)

There are a few plot twists and other key characters, including Josui’s family and a friend, as well as a Jewish doctor who helps deliver the unwanted child. Buck showed us Kyoto and the simple Japanese life as well as Virginia and its society in this era, both closed and endogamous, two cultures as distant and complex as its inhabitants.

Josui left Allen and when the time came for her child’s birth, Josui sought help from a child welfare organization. Miss Bray received her and began a file.

“Miss Sakai, I was about to say it will be very difficult to place your children in any home. Adoption, you know, is almost impossible. No one wants to adopt a child of mixed blood. I have tried it before, and it just cannot be done. Neither side wants the child.” (Part IV, p. 202)

So began the end of this sad story. But Buck, the writer, had a heart and the doctor who delivered the baby, a woman who described herself as “one-eighth Jewish” but a “whole Jew” to Hitler, fell in love with the infant and Josui’s beauty and refinement. Dr. Steiner adopted the baby.

He would be extraordinary, this child, a world child she had begun to call him, and adventurer, born in spite of all laws and hatreds, a bold child, creator of a new world. (Part IV, p. 209)

All the forces in this novel acted against Josui and Allen’s love. Provincial attitudes were ingrained even in the most generous. We expect small thoughts from small people, but we’re surprised and disappointed when we see such actions among the broad-minded who have not the strength or the desire to fight.

It’s easy to forget this, but Buck won’t let you.

The Dust of Life

As a child born in the 1960s to an American father and a Vietnamese mother, I found authenticity and understanding in Buck’s words. It also hurt. The Vietnamese had a name for mixed race children and I did not learn of it until my twenties.

When the last U.S. military personnel fled Saigon on April 29 and 30, 1975, they left behind a country scarred by war, a people uncertain about their future and thousands of their own children. These children — some half-black, some half-white — came from liaisons with bar girls, “hooch” maids, laundry workers and the laborers who filled sandbags that protected American bases.

They are approaching middle age with stories as complicated as the two countries that gave them life. Growing up with the face of the enemy, they were spat on, ridiculed, beaten. They were abandoned, given away to relatives or sold as cheap labor. The families that kept them often had to hide them or shear off their telltale blond or curly locks. Some were sent to reeducation or work camps, or ended up homeless and living on the streets.

They were called “bui doi,” which means “the dust of life.” (Legacies of War, Washington Post 2015)

The dust of life.

I realized something about myself when I came across this epithet. I was lucky. My father married my mother who, like Josui, came from a powerful family whose patriarch refused to let them marry. They did so anyway and they CHOSE me.

At a party today, a woman asked me what kind of name I have. I told her that MyLinh is Vietnamese. On other days and in other places, I’ve not been so generous. My feelings on the subject are as mixed as my heritage. In my New England town, a couple of older women had asked about my name and I said, “It’s the one my mother gave me.” They were visibly taken aback.

I reserve that answer for grocery line check-outs and encounters when I don’t like the prying. I know, it’s small of me.

For years now when folks question me further, asking how to spell it and waiting for more after I do, I tell them this.

And Pearl Buck makes me feel good about that.