Last night my twelve year old was tired from homework and nervous about two quizzes and a test today. She changed into her pajamas and came downstairs, her plush toy seal tightly in her arms, her brow wrinkled with worry. We sat by the Christmas tree and I read her this classic by Pearl Buck, a four page story which helped provide a different perspective about priorities. In reading it again, I realized just how much I missed my father.

Read it yourself, share it, read it to your children; you’ll be glad you did. December is a hustle and bustle time, but in all your going and getting, take time for the important things.

“Love alone could awaken love. And he could give the gift again and again.” 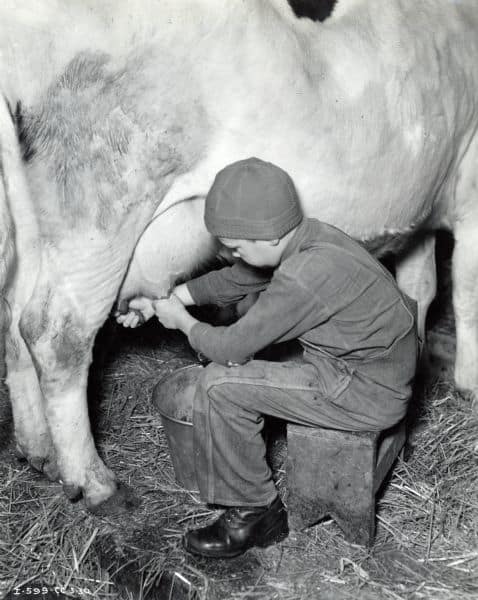 Christmas Day in the Morning

He woke suddenly and completely. It was four o’clock, the hour at which his father had always called him to get up and help with the milking. Strange how the habits of his youth clung to him still! Fifty years ago, and his father had been dead for thirty years, and yet he waked at four o’clock in the morning. He had trained himself to turn over and go to sleep, but this morning it was Christmas, he did not try to sleep.

Why did he feel so awake tonight? He slipped back in time, as he did so easily nowadays. He was fifteen years old and still on his father’s farm. He loved his father. He had not known it until one day a few days before Christmas, when he had overheard what his father was saying to his mother.

“Mary, I hate to call Rob in the mornings. He’s growing so fast and he needs his sleep. If you could see how he sleeps when I go in to wake him up! I wish I could manage alone.”

“Well, you can’t, Adam.” His mother’s voice was brisk. “Besides, he isn’t a child anymore. It’s time he tok his turn.”

“Yes,” his father said slowly. “But I sure do hate to wake him.”

When he heard these words, something in him spoke: his father loved him! He had never thought of that before, taking for granted the tie of their blood. Neither his father nor his mother talked about loving their children–they had no time for such things. There was always so much to do on the farm.

Now that he knew his father loved him, there would be no loitering in the mornings and having to be called again. He got up after that, stumbling blindly in his sleep, and pulled on his clothes, his eyes shut, but he got up.

And then on the night before Christmas, that year when he was fifteen, he lay for a few minutes thinking about the next day. They were poor, and most of the excitement was in the turkey they had raised themselves and mince pies his mother made. His sisters sewed presents and his mother and father always bought him something he needed, not only a warm jacket, maybe, but something more, such as a book. And he saved and bought them each something, too.

He wished, that Christmas when he was fifteen, he had a better present for his father. As usual he had gone to the ten-cent store and bought a tie. It had semed nice enough until he lay thinking the night before Christmas. He looked out of his attic window, the stars were bright.

“Dad,” he had once asked when he was a little boy, “What is a stable?”

Then Jesus had been born in a barn, and to a barn the shepherds had come…

The thought struck him like a silver dagger. Why should he not give his father a special gift too, out there in the barn?

He could get up early, earlier than four o’clock, and he could creep into the barn and get all the milking done. He’d do it alone, milk and clean up, and then when his father went in to start the milking he’d see it all done. And he would know who had done it. He laughed to himself as he gazed at the stars. It was what he would do, and he musn’t sleep too sound.

He must have waked twenty times, scratching a match to look each time to look at his old watch — midnight, and half past one, and then two o’clock.

At a quarter to three he got up and put on his clothes. He crept downstairs, careful of the creaky boards, and let himself out. The cows looked at him, sleepy and surprised. It was early for them, too.

He had never milked all alone before, but it seemed almost easy. He kept thinking about his father’s surprise. His father would come in and get him, saying that he would get things started while Rob was getting dressed. He’d go to the barn, open the door, and then he’d go get the two big empty milk cans. But they wouldn’t be waiting or empty, they’d be standing in the milk-house, filled.

“What the–,” he could hear his father exclaiming.

He smiled and milked steadily, two strong streams rushing into the pail, frothing and fragrant.

The task went more easily than he had ever known it to go before. Milking for once was not a chore. It was something else, a gift to his father who loved him. He finished, the two milk cans were full, and he covered them and closed the milk-house door carefully, making sure of the latch.

Back in his room he had only a minute to pull off his clothes in the darkness and jump into bed, for he heard his father up. He put the covers over his head to silence his quick breathing. The door opened.

The door closed and he lay still, laughing to himself. In just a few minutes his father would know. His dancing heart was ready to jump from his body.

The minutes were endless — ten, fifteen, he did not know how many — and he heard his father’s footsteps again. The door opened and he lay still.

His father was laughing, a queer sobbing sort of laugh.

“Thought you’d fool me, did you?” His father was standing by his bed, feeling for him, pulling away the cover.

He found his father and clutched him in a great hug. He felt his father’s arms go around him. It was dark and they could not see each other’s faces.

“Son, I thank you. Nobody ever did a nicer thing–”

“Oh, Dad, I want you to know — I do want to be good!” The words broke from him of their own will. He did not know what to say. His heart was bursting with love.

He got up and pulled on his clothes again and they went down to the Christmas tree. Oh what a Christmas, and how his heart had nearly burst again with shyness and pride as his father told his mother and made the younger children listen about how he, Rob, had got up all by himself.

“The best Christmas gift I ever had, and I’ll remember it, son every year on Christmas morning, so long as I live.”

They had both remembered it, and now that his father was dead, he remembered it alone: that blessed Christmas dawn when, alone with the cows in the barn, he had made his first gift of true love.

This Christmas he wanted to write a card to his wife and tell her how much he loved her, it had been a long time since he had really told her, although he loved her in a very special way, much more than he ever had when they were young.

He had been fortunate that she had loved him. Ah, that was the true joy of life, the ability to love. Love was still alive in him, it still was.

It occured to him suddenly that it was alive because long ago it had been born in him when he knew his father loved him. That was it: Love alone could awaken lovve. And he ccould give the gift again and again.This morning, this blessed Christmas morning, he would give it to his beloved wife. He could write it down in a letter for her to read and keep forever. He went to his desk and began his love letter to his wife: My dearest love…

Such a happy, happy Christmas!