I visited Rochester, Minnesota last week and stayed at the Ivy Lodge where the brothers William and Charles Mayo once resided.  Often confused with the Mayowood Mansion, today the lodge is the home of good friends who suffer an endless parade of visitors mistaking their home for the mansion’s grounds.

The lodge is an English country home, once barely noticeable from the street until my friends began renovations and removed the 50 year old wall of cedars.  The grounds and buildings were part of the Mayo’s farm and history is everywhere: in the carriage house, spring water cistern, root cellar, and round stables.  The main house evokes memories and charms of yesteryear with its wood paneled basement and crested fireplace, the circuitous layout of rooms on the second floor, and the wide bay windows flanking the entrance.

In short, it was the perfect locale for our girls’ retreat. 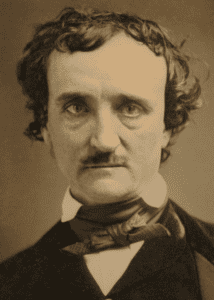 Approaching Halloween and All Souls Day, my friend and fellow literature lover brought her Edgar Allen Poe anthology for evening readings. Whether foremost in mind or a casual choice, it mattered little; Poe was perfect for a cool and colorful Minnesotan October. My first night, I awoke restless, feeling the eyes of trespassers peering into my first floor room and the carpenter’s tap, tap, tapping at my chamber door.  It was a dream, a delusion, the madness of a witch’s hour awakening, a jarring arousal of confusion and wonderment. Carpenter working on the house, trespassers looking in . . .

Only when my eyes settled on the ceiling light fixture and the lines of the four walls, did I realize where I was.

My friend recited Poe that evening, the sonorous, soulful, sad, and sinister Ulalume, one of his lesser known poems. Poetry takes on meaning with each reading, so we talked about it in the dark by the fireplace, two candles lit on the mantel. Then we read it again, taking turns.

The poem’s narrator tells about his walk into the woods, the accompaniment of his soul or psyche through the “alley Titanic, of cypress” and the “ghoul-haunted woodland of Weir.” It is October and the leaves are “crisped” and “withering” while he walks with little thought of where he is going or why.  He eventually is guided to the tomb of his lost beloved where she was buried exactly one year ago.

And I said—”What is written, sweet sister,
On the door of this legended tomb?”
She replied—”Ulalume—Ulalume—
‘Tis the vault of thy lost Ulalume!”
[Click here for link to complete Poem]

And during this second reading, the lights in the foyer flickered and dimmed, going out completely.  The old chandelier had only four electric candles, the fixture most visible from where I lay on the floor by the glowing fireplace.   My friend explained that the Mayo brothers loved to read aloud and must have approved of our recitation.

Later I learned of a true story about the house’s carpenter, perhaps the same visitor I dreamed had rapped at my chamber door.

At age 11, Gary Robins and his friends made their own hang gliders and took off down the hill in Winona, Minnesota. Maybe it was the design, or the angle of descent, or the weather, but the gliders didn’t quite work as planned.

Gary flew into a train, his head smacked against the car, and he crashed into the ground. His friends called for help and discovered the worst.  Their friend was dead.  They took him to the funeral home, zipped him up in a body bag, and left him there for the appropriate burial rites.

When the mortician received notice about the young boy, he planned to go in the next morning. However, later that day, the mortician learned that a woman had also died.  He decided to go into the funeral home to check on both.

When he entered the mortuary, he unzipped the boy’s bag and placed his hand on his chest.  Detecting a faint beat, he listened more closely.

Gary was not dead.

He lived to tell about it, in fact.

Gary’s story was not so unusual during Poe’s lifetime. Though Gary was lucky enough, many such cases resulted in untimely burials.  The mistake was not uncommon and resulted in the design of the safety or security coffin.

A safety coffin or security coffin is a coffin fitted with a mechanism to prevent premature burial or allow the occupant to signal that they have been buried alive. A large number of designs for safety coffins were patented during the 18th and 19th centuries and variations on the idea are still available today. [Wiki source link] 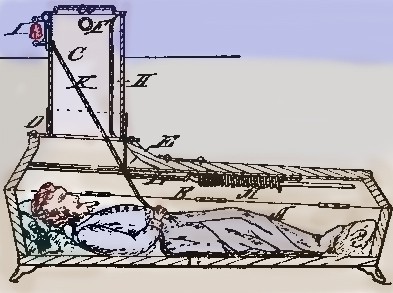 Taberger’s design included a system of ropes that attached the corpse’s hands, feet and head to an above-ground bell. This was just one of many patented designs during the cholera epidemic.

Many of Poe’s stories involve burial alive, like Fall of the House of Usher, the Cask of Amontillado, and Berenice.  Here is a tale appropriate for this week and suitable for private reading, though I suggest a later hour, a quiet corner, and a dim light.

In the year 1810, a case of living inhumation happened in France, attended with circumstances which go far to warrant the assertion that truth is, indeed, stranger than fiction. The heroine of the story was a Mademoiselle Victorine Lafourcade, a young girl of illustrious family, of wealth, and of great personal beauty. Among her numerous suitors was Julien Bossuet, a poor litterateur, or journalist of Paris. His talents and general amiability had recommended him to the notice of the heiress, by whom he seems to have been truly beloved; but her pride of birth decided her, finally, to reject him, and to wed a Monsieur Renelle, a banker and a diplomatist of some eminence. After marriage, however, this gentleman neglected, and, perhaps, even more positively ill-treated her. Having passed with him some wretched years, she died, — at least her condition so closely resembled death as to deceive every one who saw her. She was buried — not in a vault, but in an ordinary grave in the village of her nativity. Filled with despair, and still inflamed by the memory of a profound attachment, the lover journeys from the capital to the remote province in which the village lies, with the romantic purpose of disinterring the corpse, and possessing himself of its luxuriant tresses. He reaches the grave. At midnight he unearths the coffin, opens it, and is in the act of detaching the hair, when he is arrested by the unclosing of the beloved eyes. In fact, the lady had been buried alive. Vitality had not altogether departed, and she was aroused by the caresses of her lover from the lethargy which had been mistaken for death. He bore her frantically to his lodgings in the village. He employed certain powerful restoratives suggested by no little medical learning. In fine, she revived. She recognized her preserver. She remained with him until, by slow degrees, she fully recovered her original health. Her woman’s heart was not adamant, and this last lesson of love sufficed to soften it. She bestowed it upon Bossuet. She returned no more to her husband, but, concealing from him her resurrection, fled with her lover to America. Twenty years afterward, the two returned to France, in the persuasion that time had so greatly altered the lady’s appearance that her friends would be unable to recognize her. They were mistaken, however, for, at the first meeting, Monsieur Renelle did actually recognize and make claim to his wife. This claim she resisted, and a judicial tribunal sustained her in her resistance, deciding that the peculiar circumstances, with the long lapse of years, had extinguished, not only equitably, but legally, the authority of the husband.

[Click here for the tale in its entirety; it includes other burials and the narrator’s own cataleptic struggle, an ultimate lesson for all]