Millennials & the Prom – PROMposals in the Digital Age

For their fifth birthday they rented a bouncy gym, for their tenth a pirate ship, and for confirmation the country club with DJ, dance, and photography. The millennials (and their parents) do nothing by halves.

Asking a date to prom is a rite of passage into adulthood with its requisite sweaty palms, once private anguish, and personal courage. Teens today are opting instead for an orchestrated performance, often with audience, participants, and script. The thinking may run along these lines: certainly things might go better with your four best friends working with you and half the school watching.  She (or he) can’t say no.  Right?

Welcome to adolescence today and the PROMposal.

The trend is a natural outgrowth of a life of high self-esteem and prolific social media; teens no longer climb the mountain to climb the mountain. They want to get the selfie at the top. It’s not enough to know Suzie wants to go to prom with you, but that everyone knows Suzie is going with you, and that everyone is involved in the process. Or at least maybe they’ll get a ribbon for the effort or a few hundred likes on Instagram.

Shakespeare predicted this well:  all the world’s a stage. Search promposal on Youtube and you’ll get over 50,000 results.

WHAT’S IN A WORD?

Here’s the connotation of the word, PROMposal. The language involves dropping the “pro” and combining the words prom and proposal: prom-posal.  But there’s more to the second word. Once the gateway to engagement, the term “proposal” was used for existing relationships, serious ones where both parties made a commitment to each other. There were no surprises that he or she liked you, the players already agreed and expressed interest; proposals followed courtship. Unlike the marriage proposal, the promposal may come as a surprise or maybe even an ambush.  The lucky girl, or victim, may not see it coming.

The prom-posal seems sweet.  But there’s an aftertaste.

A local school banned them. Probably because the peer pressure is “soft bullying” and it’s an ironic trend given the politically correct, play-it-safe-world of tolerance these teens have grown up in.  How can a girl refuse when everyone is watching?

There’s also an aspect of cowardice. It’s easier to get a bunch of people behind you and muster forces to your aid than to go it alone. Going it alone means risking the face-to-face earth-shattering moment when you receive the reply which might just be “NO” or “I don’t know.” And there’s the possibility of the intimate “yes” and the roaring, toe-curling sensation that goes with it. Granted, today’s prom-poser runs the risk of a public turn-down and humiliation, though I would argue the probability of that happening is lower than that of the personal invite.  It’s easier to tell one person to ‘bug off’ than twenty. 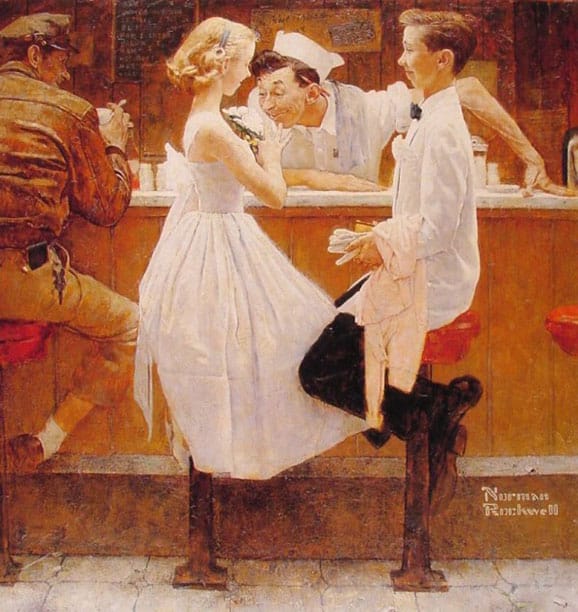 Normal Rockwell’s “After the Prom” depicts a bygone era

My fifteen year old daughter received her first invitation to the prom, complete with photos and video to regale us. She didn’t know it was happening when it happened, caught in the headlights poor deer (or dear ;-). She thought she was in deep doo doo because a friend lured her to the gym on a ruse that the athletic director needed to see her.  Sweating her potential missteps and reasons for such a meeting, she arrived in the gym to discover a junior and his four friends holding poster boards with the letters P-R-O-M-? on each poster, a bouquet of flowers in the boy’s hand.  He did ask her to the prom verbally, saying the words that is. I give him that.

Yet isn’t this flattering and fun?  It’s nice to be asked to a dance and the show is a display of interest and effort. Flashy cars and loud music come to mind, because isn’t that what it was in the day? Here’s a term from the movie, 17 Again. Ned Gold, a middle aged bachelor takes Mike to meet with his attractive principal over some issues Mike’s having and Ned decides to wear an open shirt, fur lined leather jacket, and cowboy hat to the meeting because he likes the principal.

As much as things change they stay the same.

Teens are using a new outlet for peacocking in a digital age, the personal ad campaign with props, actors, and requisite video. Google it yourself and find everything from staged antics to skydiving, not to mention the average cost of $324 (Huffington Post, 4/2015). My generation could leave our youth behind us where it belonged, but for millennials, the promposal and all their adolescent adventures will follow them through life because digital content is after all, trackable, traceable, and retrievable.

Maybe we’re a product of our generation and that’s a bridge we can’t cross, try and understand it as we may.  I spoke with a young girl about it today and she recalled her promposal with glee. Afterwards she laughed and confided in me.

“If I have a son, I’m going to make sure he has the most creative and best promposal ever.” 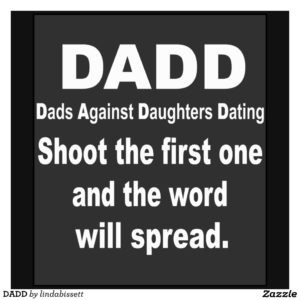 A  T-shirt for the occasion, Link to Zazzle.com

My husband and I are army veterans and we haven’t met the young man who invited our daughter to prom. We’re trying to get used to the idea of the promposal, so in the meantime, my husband thought this T-shirt was worth the investment.