If you missed it this morning, no worries because you have another chance this evening!  This date, hour, minute, and second represents the first 10 digits, or 3.141592653, of Pi.

Not just any 10 digits, these are the first 10 digits of the world’s most famous irrational number.   And mathematicians love their irrationals, and there’s nothing irrational about that.  I’ll explain, but first things first.

If you have forgotten what Pi stands for, here is a friendly and easy reminder.  Pi, represented by the Greek symbol in blue below, is the relationship of the circumference of a circle to its diameter.  In school, you memorized the formula for the circumference as this, C = Pi  times the Diameter ( C= πd).  You approximated the answer using 3.14  (Pi to the nearest hundredth) or maybe you used the fraction 22/7 to get even closer. 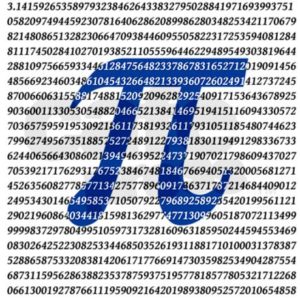 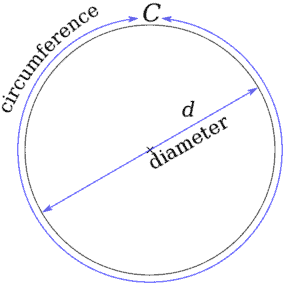 Now why is such a number irrational? Because it can never be represented by a common fraction and it has no repeating pattern or end. All rational numbers used to represent it are approximations, even the 1000 digit version above.  So, in math terms, it does not behave rationally.

What’s the big deal then?

We use it everywhere.

The use of Pi began in antiquity with the Egyptians and the pyramid, suggesting that they had at least a rudimentary understanding of the ratio.  Many other cultures and peoples estimated this relationship at about 3 to 1, but in 250 BC Greek mathematician Archimedes was the first to calculate it more precisely using an algorithm of polygons to estimate the ratio. For close to a thousand years this set the upper and lower limits of Pi, accurate to the hundredth place, and it was referred to as Archimedes Constant.

Not until the 16th and 17th centuries, did mathematicians like Leibniz and Newton calculate it accurately to 15 digits using an infinite series technique.  Today mathematicians with the help of computers can calculate Pi with ever increasing accuracy.

You see all the work that’s gone into this irrational number.  So why? Who cares?

We see it in the rise and fall of the sun, the patterns of the rainbow, the curvature of the human eye, the bend and flow of rivers, the cosmos.  And from it we derive meaning and understanding of how our planets move.  Its use is essential to the fields of geometry, trigonometry, complex numbers and analysis, statistics and probabilities.  By using it, we live in a world we understand better. And we live better. The best and brightest minds have attempted to define it, push the limits, and extend our understanding.

It takes 39 digits to calculate our known universe down to the atom.

How far are we today?

A 69 year old Japanese man recited over 100,000 digits of Pi, which took him 16 hours and 30 minutes.  He is a legend among memory masters and the Guardian reported on his story, an amazing one in which he talks about meditation, Buddhism, and what he learned.  (link to “He ate all the Pi,” The Guardian )

So to celebrate, I purchased my national blue ribbon pie from the champion pie-maker, Michele’s Pies (link if you like pie).  The B stands for Australian Beef pie which we will enjoy for dinner and the dessert is cranapple country pie. 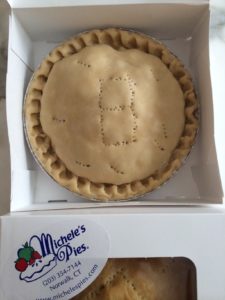 My daughter is sporting her math shirt today. 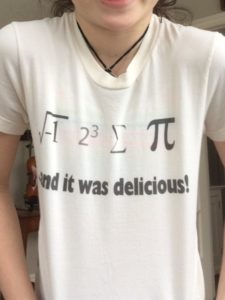