Exhausted and losing, the Viking girls huddled on the court and referring to their opponents, team captain Idalis Figueroa said, “That’s not who we are. At King we believe in the virtues: kindness, integrity, respect, perseverance. This is how we play.” (This may sound hokey but is true; I learned about it from my daughter who was in the huddle.)

They did a cheer to rally each other’s spirits and the buzzer went off to return to the game. It was the biggest of the volleyball season, both teams undefeated, Vikings 9 and 0 and Cats 6 and 0. 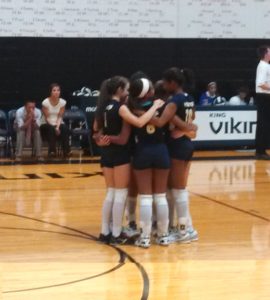 The Vikings were down one set to two on their home court. Their offense was solid but the defense was remarkable and the match demanded it; the Cheshire Academy Cats had a new outside hitter, a Finnish club champion from her country’s third place team [link to her site]. The outside hitter is a pivotal part of the offense, often leading the team’s attack because this position takes the most hits.

The girls played continuously for two and half hours, five sets, a total of 222 points (scroll down for stats*), about 100 points more than their usual three set wins.  And they eked out a come-from-behind victory through teamwork, discipline, and grit. It was an extraordinarily close match and worth noting that each team scored 111 points. Local news filmed the teams and the clip ran on the news that evening.

The Vikings had the advantage of hosting the game, as parents, friends, and fans arrived to cheer them on. The Cats arrived in dark jerseys, the same color and design as the Vikings and this was the first sign of antics to come. They did not follow league etiquette: as the away team they were supposed to wear white jerseys because the home team wears dark jerseys.

The Cheshire coach was unprofessional, foul in mouth and conduct, earning two technicals and a warning from the referees.  I’ve watched several years of volleyball and this was the first time I had ever seen a yellow card. Cheshire Academy lost the championship last year to the Vikings and the Cheshire coach shouted at the refs, accusing them of making bad calls again in this match. He asked if the refs spoke English and directed the same question to the Vikings coach, a Vietnamese American whose reserve and manner provided a study in contrasts. After the match, the girls watched the Cheshire coach give the refs and the Vikings athletic director the middle finger and the full arm and fist version. 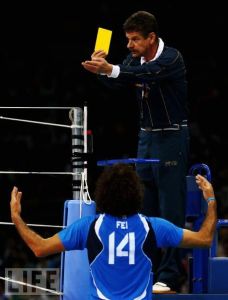 I’ve given this match some thought since Wednesday.

Let’s consider a few other observations.

When a ref made a wrong call, team captain Figueroa held up her palm and swiped it with her other hand to inform him that her team had touched the ball, giving up a point called in her favor. When the referee made the same mistake for the Cats, they said nothing.

After the match, both teams walked past each other and slapped hands. The Finnish player spoke to the Viking middle blocker Kayonne Markes, shook hands and said, “You played a wonderful game. Good job.”  Here was a pleasant and welcome overture from a new player on Cheshire’s team.

The Cats captain stormed over to her coach, complaining loudly, “I told her to get the ball, but she just stood there, so we lost the game!” Around that time her Coach gave the refs the middle finger.

The Vikings reported the misconduct, but there are lessons to be gleaned from this, both on and off the court. These volleyball players are students, athletes, and young women who play in a school league. When we read about the misconduct of professional athletes, we’re not surprised, in fact we’ve grown so accustomed to it, it’s almost passé.

Where do such behaviors begin? In our schools and in youth sports.

Aristotle says that the aim of education is to make the pupil like and dislike what he ought. When the age of reflective thought comes, the pupil who has been thus trained in ‘ordinate affections’ or ‘just sentiments’ will easily find the first principles in Ethics; but to the corrupt man they will never be visible at all. (Abolition of Man, C.S. Lewis. P. 16)

A student’s knowledge grows when she learns to distinguish right action from wrong, and it is our hope that schools teach this. That evening after the match, my husband and I attended the Vikings open house at school and I observed the four virtues posted in the classrooms, along the hallways, and heard them reiterated in the headmaster’s welcome remarks.

I asked my daughter how it would feel if the winning point for her team was a bad call. We discussed actions on both sides of the net. As the home team, the Vikings had more fans and were boisterous; they were also losing most of the match, tying it up only after the fourth set. It would have been easy enough to yell at each other, their opponents, the other coach, or to remain silent if the ref overlooked an infraction.

They did none of these.

Times of adversity test our mettle, our resolve, and our resilience; we learn a lot about someone when we see how they behave under pressure. The Vikings are learning about Aristotle’s ‘just sentiments’ because they knew the Cats’ silence when they tipped the ball was not just. They also knew it was not just to remain silent when they touched the ball. They witnessed the unjust and vulgar gestures of the Cats coach, an adult and a ‘leader’ in this athletic endeavor, and they repudiated it.

When they were down, the Vikings huddled and reminded each other of who they were and what they valued.

Not only is this right and inspiring, it reaches a higher level.