Jamal pulled his Black Chevy Impala along the corner of Toulouse and Chartres where we flanked the bay window of a jewelry store, hiding from what amounted to a spit of rain, a gift from above. The heat dropped into the 80s and the rain tamped down the smell of human sweat, alcohol, and filth.

Jamal wore his hair in short twists and his sedan was immaculate, the rear seat covered neatly in a beige blanket. He worked for Hilton for his day job and started driving for Uber last week. (People use the Uber app to find a taxi/car ride.)

We got to talking and Hurricane Katrina came up. Jamal spoke like a local and his words were smooth and articulate.

“It was one of the most successful evacuations in history, really. They only want you to hear the hype,” he said.

“I’m stubborn, you know, never listen to these things.

“I was taking a geology course at the time and just went over this.  I told my family we have to leave.  They were like, Jamal says to leave, so it’s gotta be serious. He never does anything.

Jamal said he lost everything, but the government gave them each $11,000 and food stamps.

“Where you headed?” he asked.

“Convention center,” I answered, “for the volleyball.” New Orleans was hosting the Junior National Championships for USA Volleyball and my teen was competing.

He turned down the AC because the kids were wet from the rain.

“These [volleyball] girls. A girl’s six foot one and I ask how old she is.  And she’s twelve,” Jamal said. “Makes you feel inadequate.”

Jamal said the population of the metro area is close to 1.5 million with a lot of people not returning after Katrina and just as many deciding to stay, about the same it was 10 years go. We wished him well in his second job with Uber.

The visit to NOLA was a culinary fest with warm beignets powdered with sugar, flaky pastries at Antoine’s, gumbo, and barbecue shrimp on grits; the flavor and spice could be so overpowering I needed a long drink of water between bites. I had the best catfish of my life at Muriel’s, blackened on a bed of greens and butter honey Krystal sauce. According to local lore, the restaurant has two ghosts and a seance room upstairs which was the site of a suicide; ask about the story, they have handouts.

On our first walk into the Quarter, we watched an arrest, a drunk leaning against a squad car, hands cuffed, pants half way down his behind, boxers a quarter way down, tattoos covered his flesh. The French Quarter is not for the squeamish. 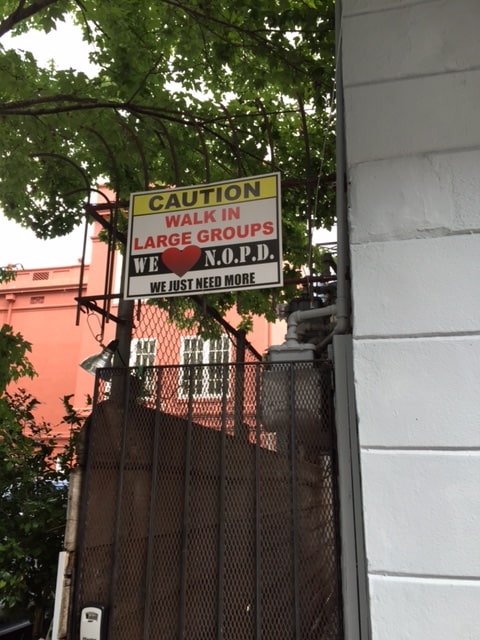 New Orleans Police Department (NOPD) sign posted in multiple locations in the French Quarter, an admission that there are not enough police and a warning we shared with our children

The smells, the vagrants, and the nearly naked ladies on Bourbon Street aside, there’s Cubs the Poet with his old fashioned typewriter set up in the middle of Royal Street, jazz music at each intersection, and hot sauce bars with free samples. I fell in love with Papier & Plume, the street music, and the bookstores in the quarter, Beckham’s Books and Crescent City Books. The historic Faulkner House Books was closed for renovations. 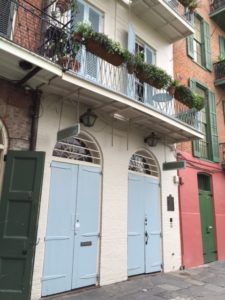 We haven’t seen Mardi Gras and we don’t have plans to anytime soon, but we saw the floats, paper mache artists at work, and thousands of props up close at Mardi Gras World, a warehouse along the Mississippi. 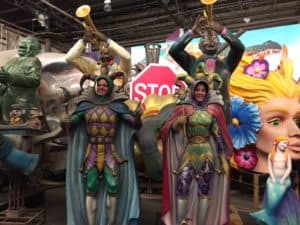 Mardi Gras World, the largest float building facility in the world, we are posing in front of Louis Armstrong

There’s never enough time on these visits. How much can you know a place in 6 days?

Antoine’s Annex – pastries, quiche, tea, anything, this is an outpost of historic Antoine’s with ready food, cool drinks, and quick service on Royal

M Bistro at the Ritz – Best beignets in NOLA served with three sauces, vanilla, chocolate and caramel $10, made while you wait, no line, in air conditioned splendor of the Ritz; you can opt for long lines outside in summer heat at the famous Cafe Du Monde or Cafe Beignet, but they aren’t nearly as scrumptious.

Steamboat Natchez – two hour steamboat ride with narrated tour of river sites, cruise along the levees and by the site of the Battle of New Orleans, Domino sugar plant, and you can visit the boiler room and steam engine  to see history in action

Beckham’s Bookshop – Second hand, antique and new books with local interest, very helpful staff, I met Al Cook. He sold me hard-to-find Edward Gorey books which they just purchased from the estate of a late book critic. I didn’t have much time and would love to explore this shop more.

Cabildo History Museum  – good background  on city and signing of Louisiana Purchase took place here. One side of building is Katrina exhibit and other is History Museum. 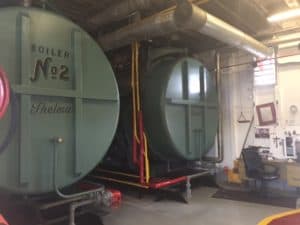 NOLA humor! Boilers named Thelma and Louise on the Steamboat Natchez where you can tour the engine room. Women do the hard work!