Liberty for Sale: Philadelphia and the Downside of Capitalism

Philadelphia played a significant role in our country’s history and I’m just back from my second visit in recent months.  But be warned, you won’t like what I have to share.

The City of Brotherly Love was once our nation’s capital and the site where the founding fathers adopted the Declaration of Independence and the Constitution. It’s worth a visit to Independence Hall to listen to the park ranger recreate the drama of our separation from England and the beginnings of our fledgling democracy.  Ben Franklin ran his presses just around the corner at the print shop and the Liberty Bell now hangs in its own museum in front of Independence Hall, the old State House.

On this trip we visited the Franklin Institute, the Reading Terminal Market, and the Liberty Bell. The Franklin Institute has an exhibit on The Art of the Brick and Animal Inside Out.  Nathan Sawaya left his job as a lawyer and creates art from Legos; his creations are mouth-wide-open fascinating, from masters like  Edvard Munch’s Scream in Legos to life size tree huggers in assorted Lego colors. 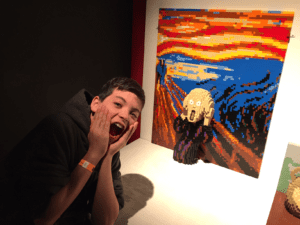 The Scream in Legos, Franklin Institute 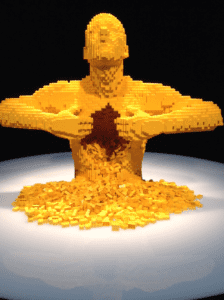 The animal exhibit is a spin-off of Bodies (the human body exhibit) with sliced, extracted, and mounted animals, showing cross sections, organs, and life-like figures, minus the flesh.  All bodies and parts are preserved through Plastination. My kids didn’t stay long.

Laura cringed and whispered, “The horse head is sliced in three!  I’m going to have bad dreams tonight.”

If you decide to visit, do so soon because the exhibit ends  April 12th.  One of the last displays on the tour was a human body and I imagined how Victor Frankenstein felt when he saw his creation.  It costs $35 for both exhibits for adults and $30 for children. Your tickets have an entrance time, but you get to visit main exhibits as well as take a photo with a massive stone Ben Franklin.

If you have time, “take a ride on the Reading.”  The old terminal is now a foodie haven and market. The crowds at Reading Terminal Market during mealtimes resemble those at a soccer world cup, but the delicacies can’t be beat. Pennsylvania Dutch baked goodies and foods, the Rib Stand, Spataro’s Cheesesteaks, juice bars, Downtown Cheese, Peking duck, chocolate, Hershel’s kosher deli, and non-food stores with books, gifts, and flowers.

The market is right next to the convention center where we stayed, so we feasted on tasty meals which we took to the room. It’s hard to find seats, never mind a table for four.

The Liberty Bell was the educational part of our trip, in more ways than one.  The line to get in was not long and we snaked through a memorial on abolition and slavery. Though it was not noted exactly when it cracked, historians believed after 90 years of use, a narrow split developed in the 1840s. The wide crack we see today is an attempt at repair which resulted in a fissure running from the abbreviation of Philadelphia through the word Liberty.  This  “silenced the bell forever.”

The Liberty Bell’s inscription is from Leviticus 25:10: “Proclaim Liberty Throughout All the Land Unto All the Inhabitants thereof.” This Old Testament verse refers to the “Jubilee”, or the instructions to the Israelites to return property and free slaves every 50 years. Speaker of the Pennsylvania Assembly Isaac Norris chose this inscription for the State House bell in 1751, possibly to commemorate the 50th anniversary of William Penn’s 1701 Charter of Privileges which granted religious liberties and political self-government to the people of Pennsylvania. (National Park Site Link)

Abolitionist groups and later suffragists saw the bell as a rallying cry for liberty and the Anti-Slavery Record, an abolitionist publication, first referred to the bell as the Liberty Bell in 1835. 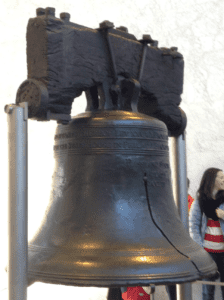 2080 Pounds of copper and tin, the strike note is E-flat

The Liberty Bell is a national treasure, so what we discovered next was troubling.  As we entered the museum, we followed the thoughtful side exhibits of the building which ran along the western edge of the mall, progressing the length of the building to the bell.  We learned about the centuries long history of this 2080 pounds of copper and tin. The museum designed to house this icon of freedom cost $12.6 million dollars.

The entrance is free, but there’s a glass box near the exit for collections. The national debt is $18 trillion, a number higher than it’s ever been in history, so staggering to think of that if we divided the debt by our 320 million citizens, each person’s debt would be $56,681 as of today (Debt clock link for real time data, debt increases by $2.29 billion/day).

So this should not have surprised us as much as it did.  A large gathering of people by the exit were reading the announcement to privatize the museum and bell. Investors are taking over the debt and will manage the expenses in exchange for certain rights, not unlike stadiums and hospital wings!

Free markets have improved human lives and the dignity of peoples around the globe, but this is too much to bear. I spoke with the park rangers to let them know my thoughts and I encourage you to do so as well. Park contact information below. 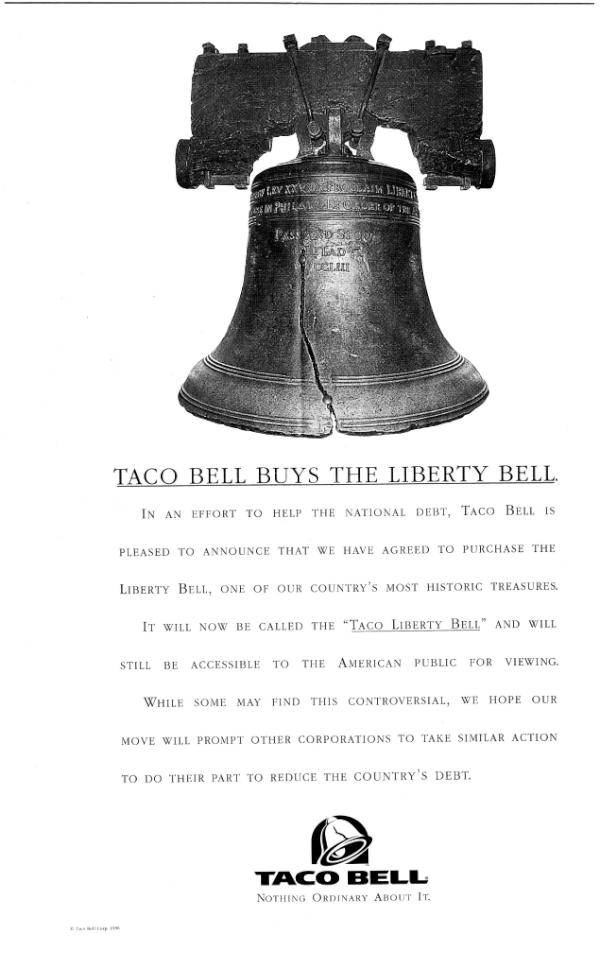 If you too are infuriated over the corruption of this national icon and beacon for freedom in the world, please let them know how you feel.

*** If you’re reading this post, you may not have realized its original publish date of April 1.  April Fools’ Day.   If you guessed it already you are right, the latter part about the liberty bell sale is a joke.

Even the gods love jokes. Plato