When Lightning Strikes, Are You Ready? 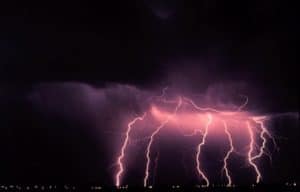 We were all shaken out of bed this morning at 5:25. I’m pretty sure the house, or very nearby, was hit by lightning. I smelled electrical smoke.  Spent the last 2 hours walking around inspecting but could not see the strike.

Cable, Internet and phone still out. No AC on main floor and upstairs as well.  Just our room. The upstairs air handler is pumping but not cold. Downstairs is just dead. Checked all the circuits, a couple were flipped, I reset.  But no AC.

The central Vac was just running continuously. Weird. Unplugged that for now.

My husband did not find a fire. And that is something to be grateful for.

Later, the electrician showed us where lightning likely traveled down the tree next to our bedroom, the bark stripped from its trunk onto the ground.

The electrical surge burst through the ground and followed wire, cable, and pipe inside, frying the circuitry, electronics, equipment, and systems on all four levels from basement to attic.

The thunderstorm hit July 1st and it is now August 4th;  over a month later, audio visual technicians are assessing the extent of the damage. Our main phones were fixed today, half the units destroyed as well as the phone’s computer, intercom, cameras, and doorbell.

The AC guy showed us the melted aluminum siding where an arc of electricity shot along the copper piping into the house. He said we were lucky our house didn’t catch fire. 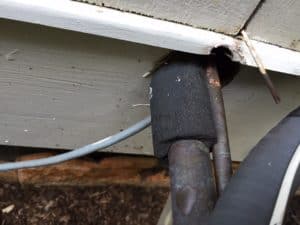 Melted aluminum siding from electrical arc along copper pipe into our house, on the far side of house where lightning hit

My friend said that her neighbor’s home burned down from the storm. Things could always be worse.

The frustrating and expensive surprise was what was NOT destroyed: the whole house surge suppressor. We installed it by the electrical panels to protect everything. We also had one on the theater.

The electrician all but laughed when I mentioned the house surge suppressor. Very little survives a direct strike. He also said we would notice things over the next three to four months, that some failures in circuitry take time.

It’s been 36 days. I’ve had time to reflect on what it means when lightning strikes in my life. I’ve listed things you can do and things you should know below.

But there are bigger concerns.

My husband Mark was an artilleryman and he’s experienced when it comes to noise and blasts. He said nothing in his life came close to this, that he fell out of bed on impact and the whole house shook. Our neighbor several hundred meters up the road said her children came running into her bedroom.

There is a silver lining to this dark cloud.

My family is alive. A typical lightning surge is between 100 million and 1 billion volts. Think about that a moment. For perspective, our residential voltage is 120 volts. The energy from one strike is about the same as that of a ton of TNT. (Source Extreme Tech on Lasers and Lightning)

Our house is still standing.

We went without a landline for a month. Kind of nice actually.

It makes me consider our lives in a new way. What’s important? I’ve asked myself this often. I thought about life as newlyweds, that our first house cost less than some cars on the road today; and about my life in the army, when I paid for my first car with a travel check (Temporary Duty pay).

It’s easy to understand this idea, but it’s another thing to live it. We have three children, houses, cars, furniture, art, bicycles, pets, TVs, computers, instruments. I remember the standard question about what you would take if you could run back in your burning home just once. What would you save?

Can I prepare for a lightning strike?

I thought we were prepared, but we were still hit hard and the damage is staggering.

Here are things you can do:

Surge protection – set up for each electronic/device and whole house; in latter case it didn’t help for direct strike but maybe it did countless times before.  (5 Things to Know About Whole House Surge Protection link)

Insurance – review your policy, our deductible is $10,000 and that may be high, but our theater projector costs more

Review all your digital and electronic devices – you will be amazed how much you have. My central vacuum panel is fried, the generator panel, the boiler panel, the garage door openers. Consider individual device surge protection.

Lightning Rods & Protection – NOAA states “Lightning rods will not prevent your building from being struck. Rather the purpose of lightning rods is to intercept a lightning strike, provide a conductive path for the harmful electrical discharge to follow (the appropriate UL-listed copper or aluminum cable), and then disperse the energy safely into the ground (grounding network). (Source link National Weather Service on Lightning)

Should I be concerned about lightning?

Lightning can have 100 million to 1 billion volts, and contains billions of watts!

The odds of being struck in your lifetime (estimated to be 80 years) are 1 in 3000. This is orders of magnitude higher than winning the lottery. Yes, be concerned and prepare yourself.

Lightning Safety for You and Your Family

Each year in the United States, more than 400 people are

struck by lightning. On average, between 55 and 60 people

are killed; hundreds of others suffer permanent neurological

disabilities. Most of these tragedies can be avoided with a few

simple precautions. When thunderstorms threaten, get to a

safe place. Lightning safety is an inconvenience that can save

The National Oceanic and Atmospheric Administration

learn how to prevent these tragedies. Many lightning victims

to a safe place. With proper planning, these tragedies could be

Other victims waited too long before seeking shelter. By

heading to a safe place 5 to 10 minutes sooner, they could

have avoided being struck by lightning.

Some people were struck because they went back outside

too soon. Stay inside a safe building or vehicle for at least

30 minutes after you hear the last thunder clap.

Finally, some victims were struck inside homes or buildings

while they were using electrical equipment or corded phones.

Others were in contact with plumbing, a metal door or a

when a thunderstorm is nearby!