EXTRA! EXTRA!  Read all about it:  my son learned how to clean a toilet this week.  In earnest.  We’re making real HEAD way. We had friends over to watch the superbowl and needed to clean house.

Our housecleaner of six years retired and woe-to-my-children, they must make do for themselves.  Perhaps worse than that, I must clean my own house.  But let me share something else.

That may be an unfair stereotype so let me add a word: MY children are lazy. This year I’ve replaced traditional resolutions like losing weight with running my house well and drafting my children into the process. This is a program not unlike the Three Rs of yesteryear’s academics which focused on the basics: Reading, wRiting, and aRithmetic.

In our “home economics” program, my kids will focus on the three Cs: Cleaning, Cooking, and Children; as for the last C, they will learn to look after themselves.  This term is a throwback to apolitical times when women were confined to domestic life, but we’re liberated now.  And it doesn’t have to be a throwback if we teach our boys.

In today’s politically correct reality, you won’t find any of the Cs in the school curriculum or on the STEM (science, technology, engineering, and math) path.  I explained to my children, that calculus and chemistry may come and go in their lives, but people will always have to go, as in toilets.  Cleaning and cooking are part of daily living. Arithmetic may prove helpful in the kitchen with recipes, ingredient amounts, or serving ratios.  And let’s face it, a lot of household maintenance involves chemicals, just check out the chemistry under your sink.

I have two teens and an 11 year old, ripe ages for independence and  character building. These children belong to a generation coddled in every possible way: emotionally, personally, physically, and even academically.  Admiral McRaven’s commencement address at University of Texas last year planted a seed which has taken root here. He told graduates that if they wanted to change they world, they needed to start by making their bed.  (Link to letter, Speaker tells grads to “Make your bed“)

How prescient a lesson it was, to graduates, parents, and children everywhere, if only they would listen. Here’s a man who knows something about it, a former US Navy SEAL and Special Operations commander who made a living out of hardship and has led and worked with many of these young adults.  He said:

“If you make your bed every morning you will have accomplished the first task of the day.  It will give you a small sense of pride and it will encourage you to do another task and another and another.”

Each of my children read the speech in its entirety and we talked about it. In this house, talk is not enough. With the cleaning lady gone, they get the opportunity to do it. There’s no one making their beds for them, or taking out their trash, or cleaning their bathroom. It’s been just four weeks now sans cleaning professional and I thought I’d provide an update.

We are in the infantile stages of development. If it takes humans 12 months to walk, I’d say they’re still crawling. But we are moving and that’s a start.

It’s not easy and there are growing pains, not to mention a few tears, sighs, door slams, and heavy feet.

When I recruited my son to clean before the Superbowl party, I told him attitude had a lot to do with it.  If he had the right attitude we would get this done, and done correctly.  If he didn’t, it would take longer and I would add more chores.

He came, he followed, he cleaned.

I shared with him cleaning tips and a secret not even the housekeeper used. After he scrubbed down the bowl with cleanser, wiped the rim, seat, and lid, I showed him the secret.

Here’s some everyday chemistry. I asked him why the toilet had a ring, and he guffawed and laughed. He was surprised when I showed him that the sink had a ring as well, because of the mineral buildup from water.  Calcium, lime, and other minerals are worse because we have well water.  And no one ever cleaned the buildup. 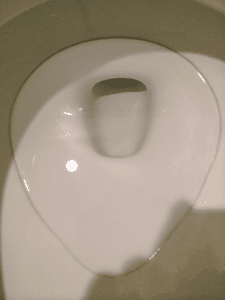 Close to 30 minutes of elbow grease later, using the pumice to scrub against the deposits, the ring was gone.  My 13 year old son announced that pumice floats!  How convenient when you drop it. And there’s science in practice. We replaced the overhead light and his sister said it was clean and bright in their bathroom, and she could read in there now.

Here’s to a Super (clean) Bowl. 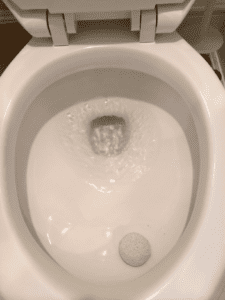 And here’s to the effort behind it.  Doing a job well builds character, even the smallest act, the first act of every day. It’s important my children learn the skills which they will need in life.

I tell my children often, not to mistake their schooling for an education. The STEM path is good, but the three Cs are a  necessity, and that goes for boys and girls.