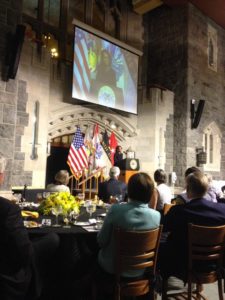 I will never forget standing at my desk in the White House; my young assistant coming to me and saying that a plane had hit the World Trade Center, and I thought what a terrible accident that must have been. President Bush was at an education event in Florida . . . And then a few minutes later, my assistant handed me a note that said a second plane had hit the World Trade Center. I thought, “My God, this is a terrorist attack.”  . . .  I tried to reach Secretary Rumsfeld, and his phone was just ringing and ringing and ringing—and I looked behind me and a plane had hit the Pentagon.

From that day on, every day after seemed like September 12.

The former Secretary of State Condoleezza Rice accepted West Point’s most distinguished award, the Sylvanus Thayer Award, and at this part of her speech, the silence of over 4500 cadets was palpable.

I looked around the mess hall because that’s where she spoke after dinner with the Corps of Cadets. Rice sat at a table with Army Chief of Staff General Raymond Odierno, Lieutenant General Robert Caslen, the Superintendent of the U.S. Military Academy, and other VIPs. 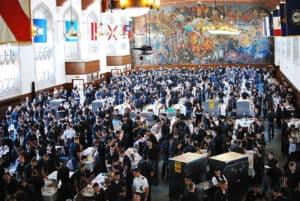 One of the six wings of Washington Hall where all 4500 cadets dine for meals and where Dr. Rice gave her speech.

Rice began her acceptance speech by talking about college life. She has been on the Stanford University faculty over 30 years and knows that student life is busy.  And she recognized that cadet life demands more, “physical readiness to defend this country, to keep your moral compass, to lead those who will defend this country.”  She said everyone has strengths and areas they are good in, but they also have areas that are hard.  And it’s the stuff that is hard, that is most rewarding.

Rice said to set aside the belief that democracy is not in some countries’ DNA.  “We believe that it is the God-given right, indeed it is the highest form of human potential to be governed in a democratic fashion.” And countries that treat their people badly, oppressing women and minorities, are dangerous. History has shown that “our belief in a more democratic and freer world is also a belief in a safer world.”

We the people, the Constitution is about inclusion.  A journey. She said cadets vowed to defend the constitution, “that remarkable evergreen document that keeps expanding the conception of “We the people”.  Though blacks were once treated as three fifths of a person, slavery was abolished and women gained the right to vote.   USA is not a perfect country, no human institution is, but what makes us special is that we keep striving to become better.

Perhaps we are tired, after the 13 long years since 9/11, of war, of terrorism and vigilance. Perhaps we are tired of trying to extend to peoples who are not free freedoms, so that we might be more secure, but let me assure you of one thing: The terrorists are not tired. (Link to Dr. Rice’s full acceptance speech)

Rice said America is unique in history and has spread the ideals of democracy even when we did not need to. With a sweeping reference to historical events, she asked the Corps of Cadets, what would have happened if America were tired in 1947 when 2 million Europeans were starving necessitating the Marshall Plan? or in 1948 during the Berlin airlift?  Or in that same year when Truman recognized Israel?  Or when the Chinese communists won when the Korean War broke out in 1950?

This was the theme of her speech, a sobering call to cadets and to the audience and to the United States.

We stayed vigilant for over 40 years, Germany was fully unified, and we saw the collapse of the Soviet Union back to Russian borders and a free Eastern Europe.

Cadets will have to make hard decisions and do hard things, she acknowledged. In Iraq, the Islamic State ISIS is committing atrocities. “Great powers that behave badly, like Vladimir Putin’s Russia, are not tired. Countries that would challenge the order in Asia, like China, are not tired, and we cannot afford to be tired either.”

Rice finished her speech with the same grace and eloquence as she began. The Cadet First Captain presented her with a West Point saber.

My teen-aged daughter attended the award dinner and said, “I didn’t expect her to be so mesmerizing. From the opening, connecting with the cadets and their lives, until the end.  Telling us about 9/11 and what she was doing.  You didn’t want it to end.”

Cadet Austin Demeuse from Wisconsin was our table “commandant” and assigned the role of “mingler” which meant he would sit with guests. He will major in French and Economics and plans to join the infantry or aviation branch when he receives his commission as an officer in the U.S. Army. Cadet Grant Lockwood from Indiana sat at the foot of the table and filled our glasses.

All of us stood to sing the Alma Mater and listen to the Benediction. Rice left the Mess Hall, as poised and confident as a cadet on parade. She gave us something that night. She gave us context, a reminder of America’s role in history, the nobility of service and the high price tag of the struggle for liberty. It is no longer enough to withdraw behind our borders because there are no longer borders.  If we want a safer world we must continue the long and righteous fight for democracy and freedom.

After presenting Rice the saber, the Cadet First Captain said, “I want you to know, Dr. Rice, we’re not tired.”