TikTok Connect the Dots – the United States and China

My friend’s daughter Sue left to attend the University of Rochester this fall and had shared a story. The school website lists international students as twenty percent of the undergraduate population but Sue said her freshmen class has about thirty percent, most from mainland China. She lives in the dorms and said that the Chinese live in dorms too, though few make an effort to engage. They keep to themselves, speaking in their language. Last month, a Tibetan official and representative of the Dalai Lama was visiting and the Chinese Student Association chased the monks out of a public space. Sue was shocked and felt the university was pandering to Chinese interest. The Chinese also tried to use litigation to stop an event on the Uighur Human rights crisis, to censor free speech on campus. (Central Tibetan Administration Bureau Report, Censoring of Free Speech by Rochester Chinese Students’ Association)

Sue decided to attend University of Rochester since she is going to double major in computer science and writing. Part of the reason she chose Rochester was she felt that she would be able to have a voice, that she would not worry about following in lockstep with what has become the narrative of so much of academia. She wants the personal freedom to write and speak her mind. (Yes, Campus Indoctrination is Real)   (Homogeneous, the Political Affiliations of Elite Liberal Arts College Faculty) 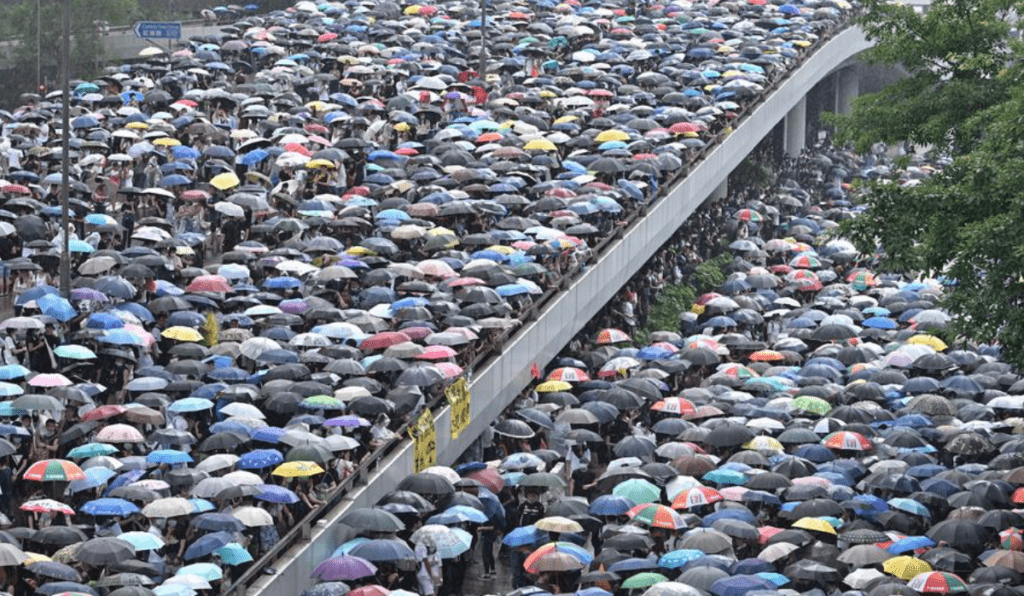 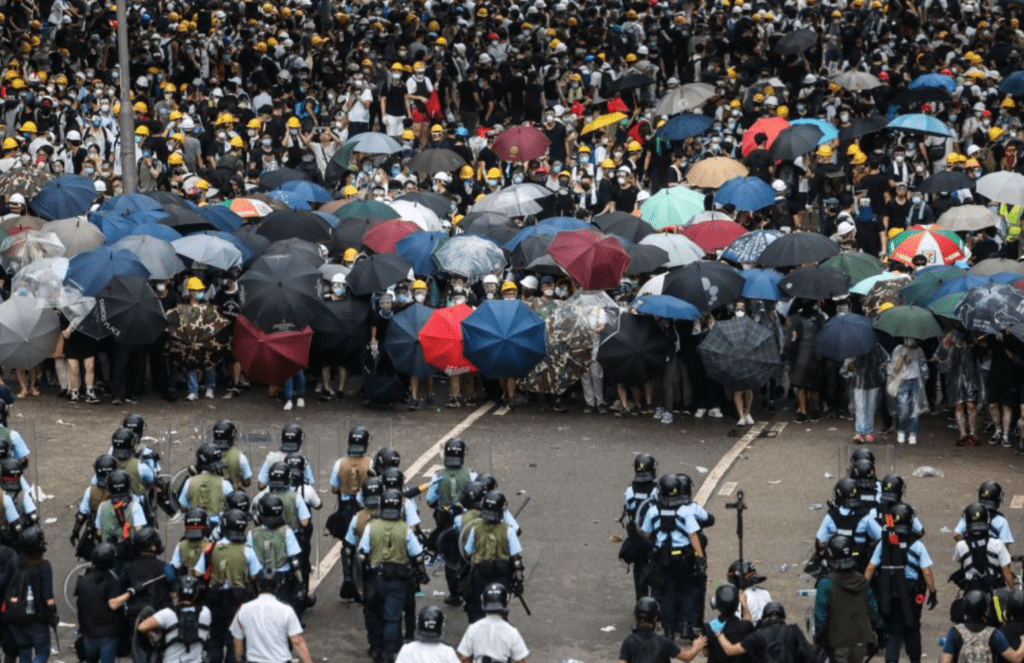 June 2019, Protestors face off with Police outside city’s parliament

A couple of weeks ago I was listening to the popular program and podcast, This American life. Umbrellas Up was a recent episode which highlighted the Hong Kong protests and the young people in this generation who are dealing with the transition of Hong Kong from its former democracy into the rule of mainland China. The umbrella was the weapon of choice for rebellion, shielding protestors from pepper spray, also a symbol of resistance since the 2014 pro-democracy protest. It’s a disconcerting look at the demise of personal liberties and a generation’s clash with its predecessors as well as the new influx of Chinese to Hong Kong from mainland China. The protests began with the Anti-Extradition movement and has continued for six months by hundreds of thousands, and by some accounts, millions. The fugitive bill has been withdrawn, but Hong Kong’s Status remains unclear.

Hong Kong was returned to China in 1997 and this generation doesn’t want to give up the freedoms enjoyed as a British Colony with its separate judiciary and legal system. In 2047 the freedom of assembly and freedom of speech will expire. For this group caught in between, they are willing to risk their personal well-being to retain these fundamental rights.

Another connection arose to China. My Vietnamese mother received a note from her Buddhist teacher about a letter from Phan Thi Moi, written on August 20, 2019. She was born and raised in Binh Dinh and she believes the United States is becoming a force by stopping the aggression of China, the archenemy of her beloved Vietnam.

“My name is Phan Thi Moi, I was born on December 2, 1917 in Vietnam. Now I am one hundred and one years-old I have come to the United States through a reunion program with my son. I was naturalized in the United States in 2003. I do not belong to any party but I believe in what the President has done for the United States and the American people. . . .

Because of the President, I will register as a Republican member and vote for the President in the upcoming election.”

A centenarian from Vietnam who has lived through the horrors of war and its deprivations, the effects from Chinese and Soviet communism, knows something of what she speaks. 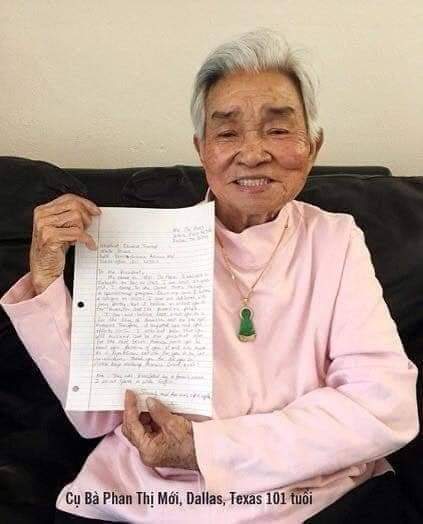 Over 100 Confucian Centers on U.S. Colleges and Many Closures This Year

Another front worthy of notice is the expansion of China’s culture and language. Many Vietnamese in America, such as Moi, once lived in a democratic and free South Vietnam, myself included. And, we are troubled about what is happening with its aggressive policies towards Vietnam as well as the growing reach of its ideology on U.S. college campuses, not only in Rochester, but around the country through its Confucian centers. The Department of Defense will no longer fund Chinese language programs that host these centers. Chinese officials involved with the institutes have admitted that the programs support party policies overseas. (Newsweek, April 2019)

The Chinese government has established over five hundred Confucian Institutes around the globe and one hundred on United States college campuses. These institutes are ostensibly designed to support and promote Chinese language and culture. That also means they approve all teachers, events and speakers. This can be viewed as China’s attempt to silence freedom of speech as well as promote their propaganda, even spying. As Sue observed with the Tibetan monks in Rochester. There is a significant and articulated effort by the Chinese government to spread its ideology on more and more campuses. Colleges are taking action, with several closures of the Confucius Institutes this year in Florida and California.

There’s been a lot of banter at my children’s school about TikTok, a social media platform. A student there has emerged as a sensation, attracting unwanted attention on campus and resulting in a new job at the school of Safety Director, an additional financial and security burden. If you haven’t heard of or seen it, it has 500 million active users with 110 million downloads in the US alone. The interesting thing about TikTok is it is run by a Chinese tech company. So, how that platform is managed, and how the data, the video, the information may be used are a concern. The children and users who utilize this platform may be ignorant of the ownership and the principles of governance, thinking that American regulations apply. Privacy, control, data use. TikTok is the world’s fastest growing social media network. Americans over the age of twenty-five may not even be aware of it, but this is a smash hit with teens around the globe, including U.S., India, and Japan. Chinese companies fall under party rule and control. This could be a powerful tool to censor information, or to use for illicit or unauthorized purposes, as well as a national security risk. (Lawmakers say Chinese owned app TikTok can Pose ‘National Security Risks’ October 2019, ABC News)

U.S. foreign policy on China may seem well beyond the stuff of daily life, and such issues from remote regions need not merit our attention. That is not the case however. In Rochester, Sue would have liked to listen to the Tibetan spiritual leaders. The large percentage of foreign students, mainland Chinese in particular, as part of a school population, have become a reality on her campus. Confucian Centers have reached beyond language and cultural learning. And the protesters in Hong Kong continue to vote with their feet, desperate to retain their individual liberties. Theirs is not a new story, but one that has played out numerous times in history.

Ask Phan Thi Moi who has the benefit of a 100 years, having survived the ravages brought on by the long arm of communist ideology. There are five communist countries in the world today: Vietnam, Laos, North Korea, Cuba, and China. The People’s Republic of China (PRC).

Moi applauds U.S. foreign policy on China because it is vital to U.S. democracy and to individual freedom. I’m not sure what all these dots mean, but I’ve reason to be watchful. The Rochester incident, the ongoing Hong Kong Protests, the Confucian Institutes, and the Tik Tok teen sensation.

The Protestors in Hong Kong seem to know deep down what Ben Franklin said about tradeoffs of liberty for security, something Moi has learned over a century.

Those who would give up essential Liberty, to purchase a little temporary Safety, deserve neither Liberty nor Safety. Ben Franklin