The Making of a Myth or Legend – Stephen Siller

What goes into the making of a myth or a legend? I listened to my daughter’s English teacher explain the importance of myths in contemporary culture, the idea that something new is often created from the weaving of old threads, that the common view of originality is more likely a result of a long series of advances. It is less a flash of genius or spike in creativity as much as it is a reshaping and morphing of existing materials into something new.

It’s interesting to think of story this way. Maybe the new tale begins with a simple and kind act, or a desperate and courageous one, either is unlikely an isolated event, but one among a multitude of otherwise mundane and minor such moments. It evolves from many similar events and like those tales told over and over, an outgrowth of such archetypal stories.

This weekend my family visited Brooklyn to retrace the footsteps that fire-fighter Stephen Siller took on 9-11. I was not alone, joining some 30,000 people in a homage to his fateful trek through the Brooklyn-Battery Tunnel to the Twin Towers.

Stephen Siller had finished his shift when he pulled in to the firehouse the morning of September 11, 2001. He heard of a plane hitting the North Tower on his scanner and drove to the tunnel. The two-lane traffic tunnel was closed so he got out of his truck, put on 60 pounds of gear and began on foot.

He raced through the tunnel to get to the Twin Towers, where he gave his life to help others.

For an event like Tunnel to Towers, there’s always a lot of waiting. I picked up my bib at the Ikea Parking Lot Number 9 where thousands of participants stood around in groups. The day was sunny and already warming up at 8:00 AM. Wave D formed up near  Coffey Park where I stood with my family for over an hour as runners and walkers spilled in. The Jumbo-tron screen mounted high let us see and hear the tributes to the  343 FDNY firefighters and 71 law enforcement officers, and the thousands of civilians who lost their lives that day.

The speaker announced the largest group in the Tunnel to Towers, 2,700 cadets from West Point, who would run the route in formation. My family cheered for them and for my daughter, Cara, who would be running as a cadet for the third time. She had asked if we wanted to join. So we did, all five of us. Waves of people walked north on Richards Street, thousands of us pressing together. The rise of voices, the children among them, the energy was palpable, to get going. Firefighters wore their gear from helmet to boots, units from all over, families and friends in memorial shirts. 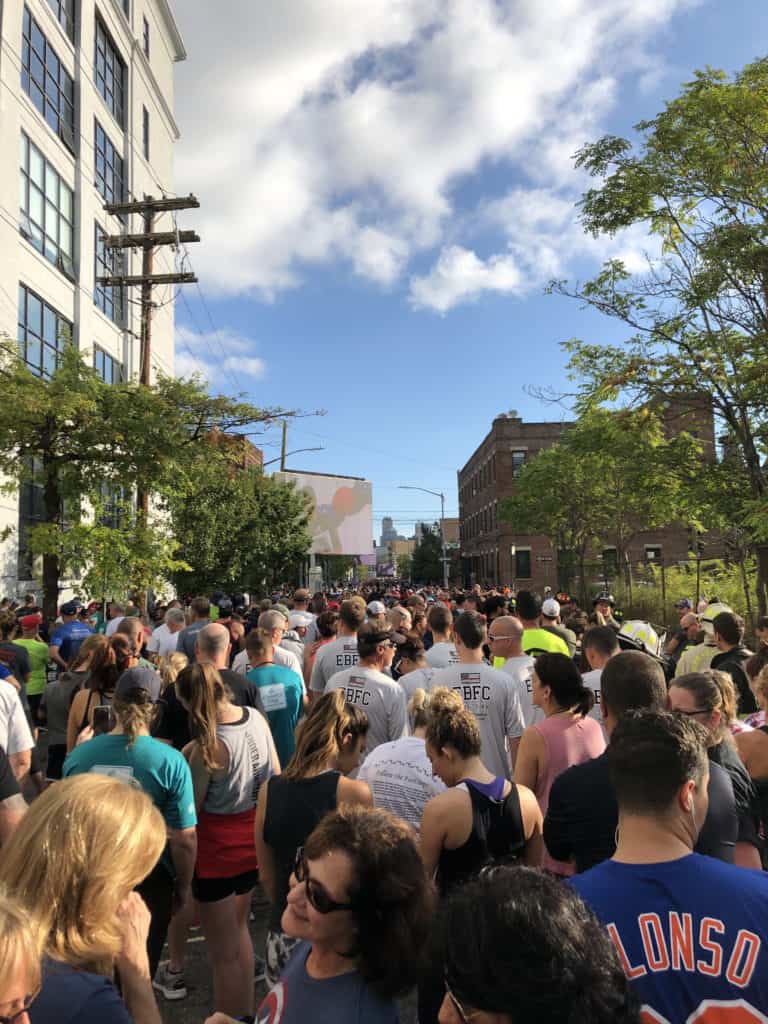 Wave D filling in with runners by Coffey Park, Brooklyn

My geography of the area was sketchy and I would learn soon enough as I crossed under the street arch of balloons at the starting line. The tunnel consists of twin traffic tubes with two vehicle lanes each and connects Brooklyn to Battery Park in Manhattan, traversing the mouth of the East River underwater. I pressed the button on my Garmin and began jogging with my husband Mark. My two younger children had darted ahead, both athletes and one a cross country runner. I circled onto the down ramp towards the tunnel and saw two large red X’s and the words DO NOT ENTER above the entrance, large lights which I imagine were also used to close the tunnel on 9-11. The tide of runners in red race shirts rolled down, past the warning signs. As I descended into the tunnel, the bodies compressed, like water into a funnel.

Going into the tunnel I realized something that no amount of thinking or analysis could provide: what it feels like to run into a long underwater tube. The event may not be a good thing to do if you are claustrophobic: to run into a tunnel. I was rested from a night’s sleep, in my tee shirt and sneakers, unlike Siller who had just come off shift and wore firefighting clothing and heavy gear. I would be going down for a while. I thought about the air, the lighting. At the mile mark I was still jogging down. Police were stationed along the tube and it was well lit. Yet, the water was all around, above and below the walls, a river unseen, its movement around us. At the start corral, I had overheard a man talking about the choke point when you hit the tunnel and what it was like inside. He said don’t look ahead, because looking ahead can make you dizzy. You could lose your footing. Focus on those just in front.

The two lanes were separated by posts in the median which runners weaved around, walkers in the right lane and runners in the left. I was well into the tunnel when I reached what appeared to be the dip or the bottom point. Siller’s sense of duty was admirable, especially for the tens of thousands of us, who were scuttling through Sunday morning. Yet he had to be thinking about his family, his wife Sally and his five children. It took time and effort for him to make it through. What was he thinking about in those 15 to 20 minutes, slogging through the panic of people fleeing Manhattan?

Most of the 5K was in the tunnel, which was 9,117 feet long. That is 1.7 miles – which makes it is the longest underwater tunnel in North America. Runners began to walk as it sloped upward. At the two mile point on my Garmin, I reached up with 2 fingers, like a victory sign. For faster runners there wasn’t much they could do, carefully pacing in and out of the masses. I imagine on 9-11, amid the car fumes and the chaos, the mania, that Siller ran in the opposite direction, against the car traffic, against the crowd.

Didn’t he know better? Didn’t his wife and his family and his friends ask this same question a thousand times since? Running to the towers meant leaving his brothers who he planned to meet that morning after his shift for a round of golf; it meant leaving his wife, and leaving his five children. Leaving it all behind. Why did he do it?

WHY DID HE DO IT?

What makes someone run into chaos and destruction and possible death, when humans are programed for survival, for fight or flight?

I had part of my answer when I arose from the tunnel in the cool air to a reception of cadets along the road, holding flags, holding photos of the fallen, lining the route. As I rounded the corner and saw the Hudson River, the Freedom Tower at One World Trade Center, the reason became apparent: to uphold what he held dear. Siller chose to help others.

A lot goes into the making of myth or legend that I will never know, Siller’s legend in particular. I did learn some things about Siller and that fateful morning. I know what it feels like to run in the tunnel on a good day. And Siller knew something about going the wrong way, a decision he made to run towards the towers rather than save himself, a decision he affirmed with every step he took in that tunnel.

Had he done so before? No. Was this a new tale or an original one? No and yes. The attacks were unlike anything America had ever seen. Yet Siller had trained for this; he had set out on this path a long time before. On a different day, in a different place, he had suited up against disaster and he had done what he needed to do, not once, but many times.

The story reminds me of the King’s three questions: when is the right time for action, who are the right people and what is the most important thing to do. This is a tale told in a new time. Siller knew he was needed at that moment, though his shift was over; he knew the people in the Twin Towers needed him; he knew what he had to do. The Tunnel to Towers story has similar threads to Leo Tolstoy’s short story about the King who believed, that if he knew the answers to the three questions he would never fail. The King saved his would-be assassin and earned a faithful subject. Stephen Siller died. Yet his noble and generous spirit, like that 1776 foot tall skyscraper, soars above us and inspires us still.

**  To learn more about Stephen Siller and the foundation, visit tunnel2towers.org 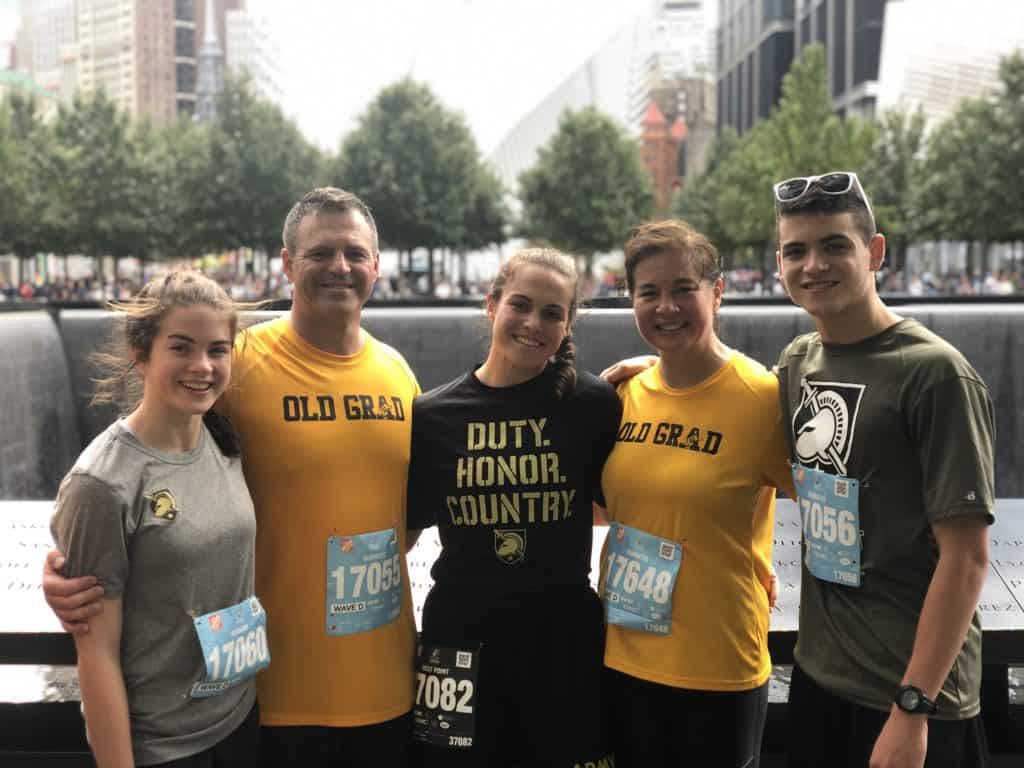