Keep Chirping – Poetry & What Divides Us

Word of the day: a cephalophore is any of a group of Catholic martyrs who were supposed to carry their heads in their hands.  Also:  The family of mollusks with distinct heads. Family of ventricose or filliform mushrooms. (wordnik.com)

I came across this image in a poem by Billy Collins which begins with a fallen tree limb and ends with St. Denis and his apparently famous headless sermon. Similar imagery came to mind, from Washington Irving’s headless horseman to JK Rowling’s Nearly Headless Nick, and I got to thinking about the medical plausibility of it all. Can a severed head still talk? and be carried by its headless body?

The Night of the Fallen Limb

It sounded like a chest of drawers
being tipped over, but it turned out to be
the more likely crashing down of a limb,
and there it was crippled on the lawn
in the morning after the storm had passed.

One day you may notice a chip on a vase
or an oddly shaped cloud
or a car parked at the end of a shadowy lane,
but what I noticed that summer day
from a reading chair on the small from porch

was a sparrow who appeared out of nowhere,
as birds often do, then vanished
into the leafy interior of the fallen limb
as if it were still growing from the tree,
budding and burgeoning like all the days before.

Toward evening, two men arrived with a chainsaw
and left behind only a stewing of sawdust
and a scattering of torn leaves
before driving off in their green truck.
But earlier, I had heard chirping

issuing from inside the severed appendage
as if nothing had happened at all,
as if that bird had forever to sing her little song.
And that reminded me of St. Denis,
the third century Christian martyr,

who reacted to his own decapitation
by picking his head up from the ground,
after it tumbled to a stop, of course,
and using it to deliver to the townspeople
what turned out to be his most memorable sermon.

I’m not sure whether it’s possible, but there is a bit of lore about headless saints, true to Collins’ account. (Google search: 375,000 results in .74 seconds)

The photos below were taken in August of 2011 of a fallen tree, limbs and all, blocking the road and my driveway from the west. I happened upon the memory this week and read the poem, giving the event new meaning. I don’t think any birds lived in the tree, though surely they must have at some point, and I wasn’t paying attention with a poet’s sensibility, and I don’t have a reading chair outside or much of a front porch. The men came and the chainsaws did their work, leaving sawdust and the ‘scattering of torn leaves’ because I remember the debris in the road.

The sparrow goes on living, hurrying about its life, and St. Denis’ head goes on speaking. The words and imagery in this poem resonate, the crash, the fallen limb, the severed appendage, the decapitation, the division of the road from east and west, the children on one side, the adults and family on the other. My oldest, the girl on the right, leaves for college, to enter West Point, 65 days from today, she on the west side of the Hudson River, I on the east.

My reading group met to discuss a provocative book (Tom Wolfe’s Kingdom of Speech), the emotional pitch near a fervor, members divided on evolution, Darwin and speech, the believer and the cynic, the progressive and the conservative, a microcosm of a country, divided.  Maybe what divides us is not lasting; all we need is a martyr or a chainsaw. Maybe St. Denis and the sparrow have it right:  just keep chirping. 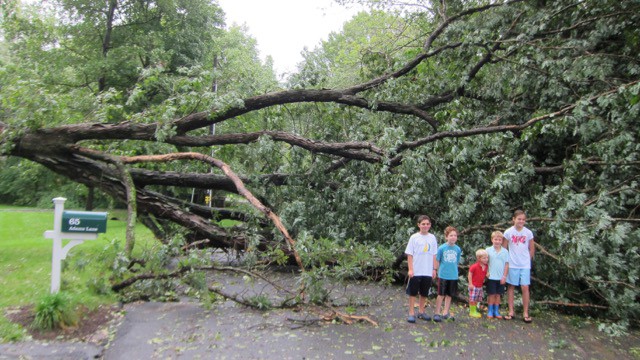 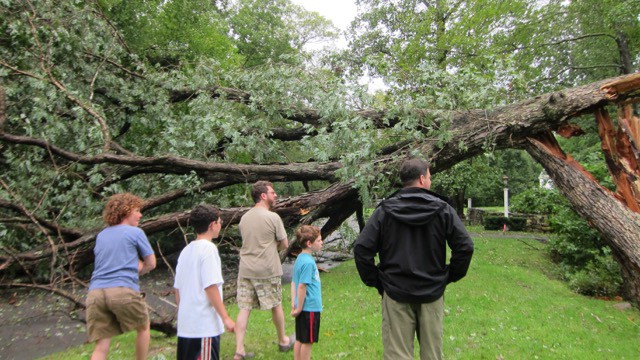 Adults and family on east side

Poetry has the power to transform the reader. April is poetry month and the choreography of words, specific words in a specific order when spoken out loud, lifts the spirits, even when the rain won’t go away.

Subscribe to a poem a day here, at the poetry foundation. The site also has a daily audio poem, because the words are best when they’re heard.

*** Not easy to lose a limb or a tree. Workers took this tree down and discovered just how sad it was. 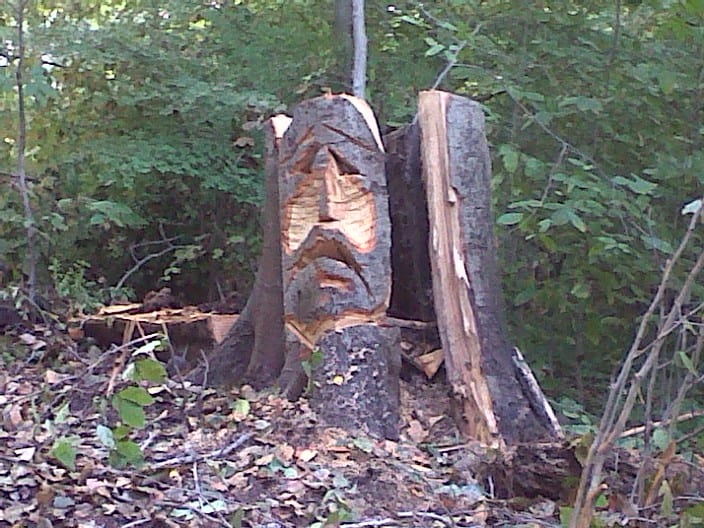