Marginalia – Notes in Books – To Write or Not To Write?

Marginalia as a word may bring forth varying associations, but focus on the first two syllables for its meaning, as opposed to the last. Readers write in books along the margins, on the flyleaf, making various marks, scribbles, appendages and annotations. 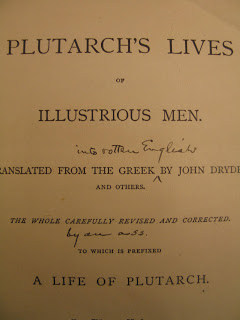 Mark Twain’s copy of Plutarch’s Lives with marginalia “Translated from the Greek — into rotten English . . . and corrected — by an ass”  Most of Twain’s books have handwritten comments   (LINK to site)

As a child when I followed a passage with the tip of my pencil, I sensed the specter of an English teacher over my shoulder, ensuring I didn’t deface the book. This may be a legacy many of us share from childhood. Students used brown grocery bags to make covers for texts, wrote names on the inside cover,  and erased stray marks before they returned them at year’s end. The printed page was sacred.

But like a lot of things from our school days, this was a practice based on economics as much as provincial norms. Texts weren’t cheap and they still aren’t cheap. We don’t write in books because it decreases their value.  But does it?

Harry Potter fans will tell you that the Half Blood Prince’s potions text changed the life of its new owner and affected the story.  And why was that? The Half Blood Prince, or former owner, took great pains to annotate detailed changes and comments that made the potions not only viable, but potent.  There are many other goodies in the book which play into the story.  But no spoilers here.

Still, the practice of keeping it clean stuck with me and similar to many habits, I kept with it like an old pair of shoes. But the shoes began to wear out and didn’t serve their purpose.  I started using sticky notes and tabs.  Then I used a pencil to underline words and key phrases.

My father had an extensive collection of books which we inherited when he died. I discovered his marginalia and end note errata, especially in Vietnam era publications.  I relish reading them and feel him with me, his claims and disagreements or his emotional joy right there on the page, sometimes accompanied with an exclamation point or other remark.  He was a man who felt compelled and authorized to set the record straight and as one of our nation’s Vietnam policy experts, he would have known.

Vindicated and brazen, I took to writing on a book’s fly leaf and dating my comments, what I was doing, where I was, my reaction to characters and literary elements.  Now I write in the book and highlight powerful passages, key words, or problem areas. I forget so much these days, I find that when I read my notes, a lot comes back to me.  It also makes re-reading fascinating because my reaction and experience are different.  The book’s the same, but I’ve changed.

So engage, challenge the author, agree. This was standard practice once. And you needn’t be a scholar, just a thinking and engaged reader.

I love a clean copy of a book as much as the next reader, but I’ve come to appreciate the value and character of a book which has lived, been read and touched, seen, devoured, loved.

Here’s one of my first memorable examples of marginalia. 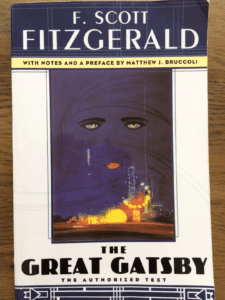 The Great Gatsby arrived slightly altered, with punched hole in rear cover, worn gummy label on the back, and a handwritten inscription on the inside front cover.  It was a fairly clean copy, but I was a bit disappointed.  I ordered this book for a meeting with friends and a serious bibliophile, a huge Fitzgerald fan.  Her husband’s name is Scott, her daughter’s Scottie, and her dog’s Zelda.

One night, while sitting in her house with fellow readers to discuss this love of her life, The Great Gatsby, I shared the inscription in my book. 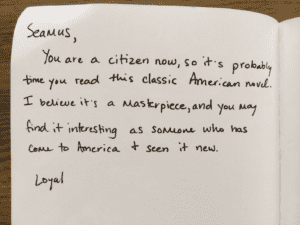 Ordered this “Good” copy which arrived with inscription

You are a citizen now, so it’s probably time you read this classic American novel.  I believe it’s a Masterpiece, and you may find it interesting as someone who has come to America and seen it new.

When I finished reading this to the group, an audible hush followed.  My ‘marred’ copy felt special, insightful, and touching. I closed the book and slid my fingers slowly down the cover, thinking of the places and people this book reached.

Perhaps Poet Billy Collins said it best in Marginalia with its references “against the author” and “dismissive” comments and “student scrawls” and “fans who cheer.”  Read it to learn the legacy of the Irish monks in the scriptoria and the poignant, final example Collins divulges.

So leave an imprint, make an impression.

“Seize the white perimeter as [your] own and press a thought into the wayside.”

Sometimes the notes are ferocious,
skirmishes against the author
raging along the borders of every page
in tiny black script.
If I could just get my hands on you,
Kierkegaard, or Conor Cruise O’Brien,
they seem to say,
I would bolt the door and beat some logic into your head.

Other comments are more offhand, dismissive –
‘Nonsense.’ ‘Please! ‘ ‘HA! ! ‘ –
that kind of thing.
I remember once looking up from my reading,
my thumb as a bookmark,
trying to imagine what the person must look like
why wrote ‘Don’t be a ninny’
alongside a paragraph in The Life of Emily Dickinson.

Students are more modest
needing to leave only their splayed footprints
along the shore of the page.
One scrawls ‘Metaphor’ next to a stanza of Eliot’s.
Another notes the presence of ‘Irony’
fifty times outside the paragraphs of A Modest Proposal.

Or they are fans who cheer from the empty bleachers,
Hands cupped around their mouths.
‘Absolutely,’ they shout
to Duns Scotus and James Baldwin.
‘Yes.’ ‘Bull’s-eye.’ ‘My man! ‘
Check marks, asterisks, and exclamation points
rain down along the sidelines.

And if you have managed to graduate from college
without ever having written ‘Man vs. Nature’
in a margin, perhaps now
is the time to take one step forward.

We have all seized the white perimeter as our own
and reached for a pen if only to show
we did not just laze in an armchair turning pages;
we pressed a thought into the wayside,
planted an impression along the verge.

Even Irish monks in their cold scriptoria
jotted along the borders of the Gospels
brief asides about the pains of copying,
a bird singing near their window,
or the sunlight that illuminated their page-
anonymous men catching a ride into the future
on a vessel more lasting than themselves.

And you have not read Joshua Reynolds,
they say, until you have read him
enwreathed with Blake’s furious scribbling.

Yet the one I think of most often,
the one that dangles from me like a locket,
was written in the copy of Catcher in the Rye
I borrowed from the local library
one slow, hot summer.
I was just beginning high school then,
reading books on a davenport in my parents’ living room,
and I cannot tell you
how vastly my loneliness was deepened,
how poignant and amplified the world before me seemed,
when I found on one page

A few greasy looking smears
and next to them, written in soft pencil-
by a beautiful girl, I could tell,
whom I would never meet-
‘Pardon the egg salad stains, but I’m in love.’

Edgar Allan Poe on the merits of marginalia:

In getting my books, I have been always solicitous of an ample margin; this not so much through any love of the thing in itself, however agreeable, as for the facility it affords me of penciling suggested thoughts, agreements and differences of opinion, or brief critical comments in general. Where what I have to note is too much to be included within the narrow limits of a margin, I commit it to a slip of paper, and deposit it between the leaves; taking care to secure it by an imperceptible portion of gum tragacanth paste. (Full article here)