Today is International Women’s Day. If you’re like me, you saw it on Google’s search page, and by holding your mouse cursor over the Google logo, you can watch the video and proceed to the link to learn more. 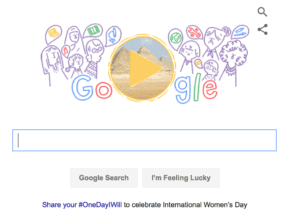 So it’s a good time to share this exchange between Alan Rickman and Kate Winslet as King Louis XIV and Madame Sabine de Barra, which draws a comparison between a flower’s beauty and a woman’s. I’ve been watching Alan Rickman movies since he died this January, popular films like Harry Potter and the Half Blood Prince and period pieces, like this one, A Little Chaos (2014), which Rickman also directed.

In A Little Chaos, the widowed Madame de Barra (Winslet) is chosen by the royal gardener Master Andre le’ Notre (Matthias Schoenaerts) to build an outdoor ballroom. Imagine lush grounds with tiered seating and fountains appropriate for Versailles. It’s a busty powdered period drama of life at court and in the gardens, and  it’s a chance to see and hear the British actor one last time, in a role so befitting. Pursed lips, downward glance, droll and distinctive voice.

In this scene, Madame de Barra meets his highness after a surprise encounter with him earlier in his private garden. The group of ladies includes mistresses and maids of varying ages as they present her to the King and his entourage of male courtiers.  All of the courtiers, women on one side and men near the King, listen to the greeting between the King and Madame de Barra

The Four Seasons referred to in the script is a flower.

(Courtiers) Oh. The king comes.
Have you been presented before?
(Mme) No.
Your Majesty, it is my pleasure
to present Madame de Barra.
Madame.
(Mme) Your Majesty.
(King) Is it a Four Seasons? [a flower Mme lifted from a vase and presents to King]
(Mme) It is, sire.
For the most famous
gardener in the world.
(Courtier) Allow me,
Your Majesty.
(King) A light, honest scent.
Natural and unforced.
Some of the roses seem faded
and overblown.
(Mme) That fate awaits
all roses, sire.
(King) Continue, madame.
(Mme) All roses are open to the
elements, Your Majesty.
They bud, bloom and fade.
(King) Is that so, madame?
(Mme) The rose grows entirely unaware,
changing naturally
from one state to another,
and although the elements
may treat her cruelly,
she knows nothing of it
and continues to her end
without judgment on her beauty.
Alas,
’tis not the same for us.
(King) If such a rose could speak,
what would she say?
(Mme) Yes, I am here
and gave service
under nature’s eye,
and after me,
my children will be.
Is there any greater contribution
or more graceful end?
(King) A wise rose.
And what protection can the
gardener afford this rose
from the harsh
elements of change?
(Mme) Patience, care
and a little warmth from the sun
are our best hope, Your Majesty.
(King) I’m obliged to you, madame,
for that sweet reminder.
Now walk with me.
And tell me of
your progress in our garden.

The King’s mistress who presents Winslet is played by Jennifer Ehle, the actress who played Elizabeth Bennett in Pride and Prejudice opposite Colin Firth’s Mr. Darcy.

When the King suggests that the bloom is off the rose, Sabine shows her wit and generosity of spirit.

Regardless of progress and international holidays dedicated to women, men and women and society judge others by appearances.  It’s a truth universally acknowledged: Beauty fades. 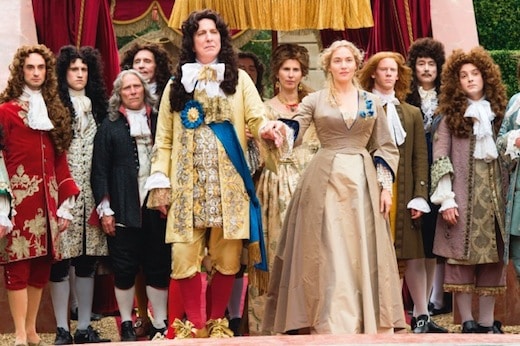 In ‘A Little Chaos,’ a Guileless Kate Winslet Offsets a Lavish Versailles, NYTimes

The silky growl and insinuating gaze of the British actor Alan Rickman make him a prime candidate to play a jaded aristocrat privy to every dirty secret within his purview, whether political or sexual. And in “A Little Chaos,” which Mr. Rickman directed, he portrays Louis XIV, the French king of kings, putting the finishing touches on Versailles, the royal chateau outside Paris where he moved his court, the better to exert control. The year is 1682.

Mr. Rickman has found in the Sun King a character worthy of his imperious, reptilian charisma. With a knowing gaze, raised eyebrow and narrowed eyes, he surveys his courtiers as they bow and scrape and jockey for royal favor. A hotbed of scheming vipers, Versailles is really a gilded prison for the titled gentry who have nothing better to do than gossip, backbite and fornicate. You imagine that sooner or later, under Louis’s watchful eye, everyone will have slept with everyone else.

Into this jungle of obscene privilege arrives Sabine De Barra (Kate Winslet), a sturdy, guileless everyday woman chosen by the king’s chief landscape architect, André Le Notre (Matthias Schoenaerts), to design the Rockwork Grove, an outdoor arena-like ballroom of tiered steps through which water gushes as an unseen orchestra plays behind the shrubbery. The movie makes much of Sabine’s unorthodox design sense. Where her employer believes in perfect order, Sabine, a modernist before her time, champions “a little chaos” to offset the uniform symmetry.