Francine Prose shares this about writing.

One essential and telling difference between learning from a style manual and learning from literature is that any how-to book will, almost by definition, tell you how not to write. In that way, manuals of style are a little like writing workshops, and have the same disadvantage — a pedagogy that involves warnings about what might be broken and directions on how to fix it — as opposed to learning from literature, which teaches by positive model.  (Reading Like a Writer:  A Guide for People Who Love Books and For Those Who Want to Write Them, Francine Prose,  p.44)

I love the last line.  Learning from literature is the positive model, and it is also the classical model, studying the greats and understanding what makes them great.  Francine Prose examines the concept of close reading, and then she discusses writing from its most basic components: words, then sentences, and paragraphs.

Close reading means to pay attention to language, sentences, word choice, that is, to consider the text word by word. A teacher of literature and writing for over 20 years, Prose learned something about her classes: her students overlooked the language, paying little attention to the author’s choice of words.

So Prose changed the way she taught.

Instead, she “organized classes around [a] more pedestrian, halting method.”

In this way they “would get through as much of the text as possible — sometimes three or four, sometimes as many as ten, pages — in a two-hour class.” (Prose, p. 11)

How’s that for close reading and close study?  Think of it, 3 to 4 pages in a 2 hour class!

In reading groups and writing groups, I’ve recognized this simple truth Francine Prose has shared so eloquently in her book for readers and writers.  Be precise, examine word choice, discuss sentences and passages, and sometimes the connections become clear, the author’s intent, the contribution to story.  In the case of my writing group, when a critique is specific, I learn what works and what does not.

So, I leave it to you to read Strunk and White or the Penguin Writer’s Manual. In the meantime, I invite you to consider these words from my recent reading.

What’s in a name?  or a word?  A lot, and Edward Gorey certainly thought so.  Readers and fans love to explore the wordplay and puns in his work, as much as he loved to play with words.  His own name appears in many of his works as anagrams; he played with words and names, altering spelling and meaning, poking fun, or, as he always said, writing nonsense.  Fans the world over think of his illustrations when they think of him, but Gorey thought of himself first as a writer.  He wrote the text and manuscript first.  Only then, could he illustrate the story. 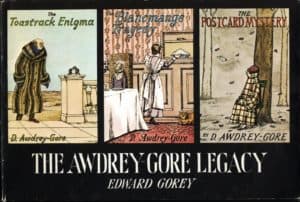 Anagram of his own name, D. Awdrey Gore 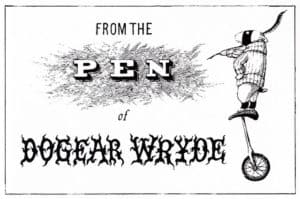 Gorey loved words and readers loved him because of it. He wrote alphabet books, although parents were not likely to share them with very young children.  His most famous, The Gashlycrumb Tinies, begins like this:  A is for Aimee who fell down the stairs.  B is for Basil assaulted by bears.  C is for Clara who wasted away.  D is for Desmond thrown from a sleigh. It is horrible, sick, fascinating, and oh-so-fun to read. My children who are older now laugh out loud reading his work.

Think of the nonsense word Gashlycrumb.  Like crumbs, these tiny nothings were once part of something bigger, the world of the living.  The grim reaper stands over them with his dark umbrella, casting its shadow over their sorry lots in this world.  The back cover has 26 little headstones.  There are all kinds of word fun and illustration games in Gorey’s work. 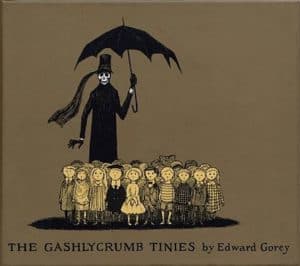 An alphabet of tragic endings, link to book

The Eclectic Abecedarium includes 26 non-fatal sketches with entries like this:

Beyond the Glass – We see life pass

Be loath to drink Indian Ink

Don’t leave the shore – Without an Oar.

The nonsense word in the title, Abecedarium, is a play on abecedarian which is a real word meaning arranged alphabetically or a person who is a novice. There’s a lot here for readers of every age to learn and in fact, Gorey’s audience is a highly educated group, college and beyond.  I keep a dictionary or tablet handy for reference because there are words I’m not sure about and I wonder if he’s playing or for real.

I’m reading his biography/autobiography, Ascending Peculiarity, and the flap reads:

Edward Gorey’s extraordinary and disconcerting books are avidly sought after and treasured around the world, but until now little has been known about the man himself.  While he was notoriously protective of his privacy, Gorey did grant dozens of interviews over the course of his life. And as the conversations collected in this book suggest, he was unfailingly charming, gracious, and fascinating. (Ascending Peculiarity, book link)

I’ve purchased a few of his small books as they were originally designed but many are out of print and pricey.  Gorey realized this and found his cult-like following amusing.  So, he compiled collections of his work as he was suggested to do, though he was not altogether happy about it because much of the illustration was designed for the size and page turn and subsequent experience.  He was gracious and obliged.

Notice anything about these words?  First are they words?  Amphigouri or amphigory is nonsensical writing or gibberish. And HE is in there, in the word.  Not -gouri or -gory, but -Gorey.

You might see where he inserts himself on the cover below.  Gorey loved cats and he was known to wear long coats and sneakers.  So do you see  what letter he illustrated as himself? 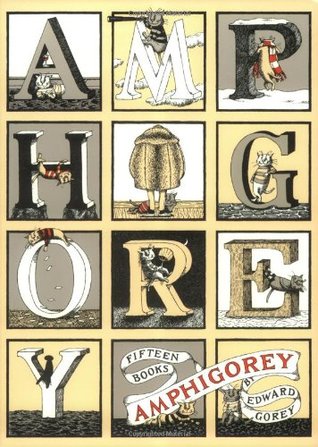 A good introduction to Gorey, from limericks to tragic tales, illustrated in pen and ink (link to book)

Such is the power of words, even amphigory, or nonsense as Edward Gorey himself told us.  Yet this artist and writer of few words entertains readers the world over; his stories make us shudder, laugh, snicker, and gasp.

Next letter will focus on sentences.