History Teacher Provides a Lesson – But Not One She Intended

Some unlucky souls have already returned to school and we will keep them in our thoughts. Meanwhile, stretch out on the lounger, kick off your shoes, and crack open a cold one while we consider our luckier path, no school till AFTER Labor Day. Let’s contemplate the meaning of school and its role, if any, in receiving an education.

I won’t mention names, but if it’s a comfort to readers, public schools don’t have a monopoly on bad English.

My son David’s history teacher, let’s call her Ms. Shale, replied to my note about his grades. Her response was adequate and predictable, except in one regard, her mention of proofreading skills.

English has morphed into Language Arts and the study of English has been left to the Foreign Language department. So unfashionable is it today, that the teacher felt compelled to list in parentheses just what she means.

In regard to History class, David needs to pay specific attention to his proofreading skills (capitalization, puncuation, grammar, verb tenses, etc…).  His written voice can still be very informal (more conversationial than research based).  Going forward, he should put more time into this part of his writing or should look to have another person (parent, friend, sibling, teacher, etc) read over his work and point out these mistakes to him so that he can work on better identifying them himself.

This makes sense, but I found her letter as informative about her as it was about my son. Readers may have noticed the first time, but even in an age with auto-correct and spell-check features, she made two spelling errors, one in the first sentence and another in the second.

The first is missing a letter and the second has an extra letter. Punc-tu-a-tion and con-ver-sa-tion-al.

Ms. Shale means well and we all make typos. It’s forgivable in most cases, except it violates the purpose of her paragraph. She should mind her letters.

The bigger mistake is her belief that a student’s “voice” should be less “informal” and more “research based.” I’m not sure what she means, but I suspect that “research based” means more Latin and Greek words, longer and vague explanations, and a tendency towards useless phrases.

Ms. Shale and her history students would be better served to focus on meaning and clarity. George Orwell said it well, “It [the defense of the English language] has nothing to do with correct grammar and syntax, which are of no importance so long as one makes one’s meaning clear.”

Here’s an example from his popular essay, Politics and the English Language.

I am going to translate a passage of good English into modern English of the worst sort. Here is a well-known verse from Ecclesiastes:

I returned and saw under the sun, that the race is not to the swift, nor the battle to the strong, neither yet bread to the wise, nor yet riches to men of understanding, nor yet favour to men of skill; but time and chance happeneth to them all.

Here it is in modern English:

Objective considerations of contemporary phenomena compel the conclusion that success or failure in competitive activities exhibits no tendency to be commensurate with innate capacity, but that a considerable element of the unpredictable must invariably be taken into account.

The first passage contains 49 words but only 60 syllables, and all of its words are from everyday life, words Ms. Shale would deem informal and discourage. The second contains 38 words of 90 syllables: eighteen of its words are from Latin roots and one from Greek. The first contains six vivid images and the second does not have a “single fresh, arresting phrase, and in spite of its 90 syllables it gives only a shortened version of meaning contained in the first.”

Cut the flab. Get rid of the overblown prose. The modern version is ugly, perverted, and tends away from “concreteness” with its Academic-ese.

Sadly, Ms. Shale is not alone. In my experience, her attitude about writing is common, especially in education circles.

Here is Orwell on how to use language as an instrument for expressing thought.

Two qualities are common in modern English, staleness of imagery and lack of precision. Get rid of pretentious diction. Cut meaningless words.

A scrupulous writer, in every sentence that he writes, will ask himself at least four questions.

Look over the next sentence you write, whether it is a text or thesis.

Can you cut words and keep the message? Writers owe it to their readers to say it with less and to make every word count.

I have made this longer than usual because I have not had time to make it shorter. Blaise Pascal

Schooling Versus an Education

Will students learn from Orwell today? That depends on you. Studying Orwell or other great authors is part of the classical model and that is not popular. His writing guidance requires precision, fresh images, clarity, and thought.

Modern English is often not just ugly, but inaccurate. It reflects foolish thoughts which teachers not only encourage, but model in their own writing. 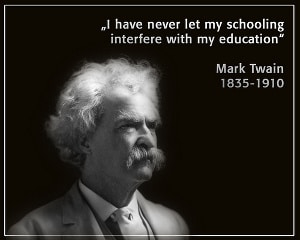 Don’t confuse schooling with an education. Ms. Shale wrote and told me about David, but she told me a lot more than what she intended. Learning to write well is about more than grammar.

And that’s a lesson not just for David, but for all of us.

* George Orwell wrote the essay Politics and the English Language in 1946. Every sentence in this 15 page essay instructs and shows just how regimes have gotten away with murder, that writing is not simply the frivolous concern of the professional writer, but that of every person who wishes to think clearly.