“If I agreed with you, we’d both be wrong.” This is a paraprosdokian. Huh?

In the spirit of National Grammar Day and the power of language to go beyond its machinery and rules, let’s explore strange new words, seek out new life in literary figures of speech, and boldly go where great authors have gone before. (R.I.P. Leonard Nimoy, Spock of Star Trek fame)

Here are some figures of speech to amuse and delight.

You have likely come across this before, but didn’t realize there is a name for such a thing. The paraprosdokian is a sentence or phrase which has a surprise or unexpected ending, often with comedic effect.  Para is Greek for against, as in paradox or paranormal, and prosdokia is Greek for expectation.

Here are some notable and popular examples.

Groucho Marx was master of the paraprosdokian sentence. 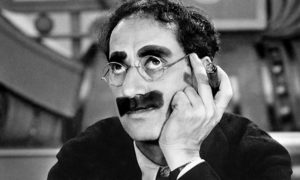 Then there is the ever powerful balanced sentence which is often referred to as parallel construction. This figure of speech, the isocolon, is a series of similarly structured elements of the same length.

More specifically, these two examples are bicolons because they both use two clauses or phrases.  The following isocolon is a tricolon, likely one of the most famous.

The rhetorical ellipsis is different than the standard three dots, though it is similar in meaning. As a scheme, an ellipsis is the omission of a word or phrase that is readily understood in context. Virginia Woolf is regarded as one of the major literary figures of the last century and a master wordsmith. She uses the ellipsis in her novel The Waves, which follows the lives of six friends. Here, the surviving character of Bernard writes about his five friends.

The words “was disgusted” are understood to follow Rhoda and the word “wanted”  is understood to follow Jinny.  The effect is a grouping of characters, their desires and distastes, in an orderly and powerful fashion.  They are different, but they are a group. The economy of words remains true to each character and the writing is elegant.

In serial construction of words, if there is authority in twos, believability in threes, then fours offer something more, a sampling of the infinite.  And with that, here is the fourth figure of speech which isn’t a figure at all, but an observation you might share.

There are those words, the diction and the syntax, which are so distinctly British, so famously British, that they’re instantly recognizable to even the youngest readers. I used such syntax in the prior sentence three times, did you catch it?

I finished reading Heart of Darkness by Joseph Conrad, who incidentally is Ukrainian but wrote the book in English, his third language. Conrad lamented that he wished he had been a French novelist because of the precision of the language, but it was too late.  This book is decidedly English (there I go again, do you notice yet?) and he is more convincing than the native Englishman.

Here are a couple phrases. See if you don’t detect the British-ness in Conrad’s third tongue. Bear with me on the second passage, I just love it because it had me in stitches.  You may enjoy it yet.

So, did you figure it out?  this English syntax?

Here it is.  The Brits love their adverbs, but especially when they modify adjectives. A modifier of an adjective takes the form of an adverb, often with the -ly ending. There you have it!