Just Back from Afghanistan, Army Colonel Discusses War and Peace in the Middle East

“Priorities: I was watching one of the sports channels on the Armed Forces Network the other day (I’m deployed to Afghanistan). I was amazed at the level of comprehensive, thoughtful analysis of a single football game. It occurred to me that our democracy currently cannot produce a similar effort for the state of current affairs in the world, particularly the ongoing crisis in the Middle East. . . My fellow Americans you are uninformed, and, mostly, you care more about your football team than you do ISIS/Afghanistan/Ukraine.” 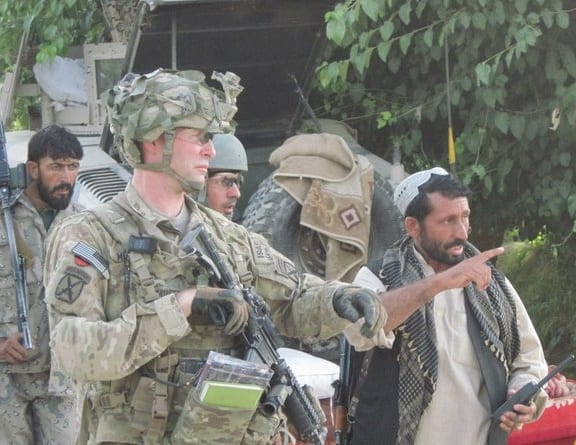 Colonel Kenneth Mintz just returned from his deployment as Joint Operations Officer for Regional Command East in Afghanistan. He has deployed three times to Afghanistan, once as Battalion Commander of 1st Battalion, 32nd Infantry Regiment of the 10th Mountain Division; he deployed to Iraq for 15 months; and he deployed twice to Bosnia. In his 23 years of service, he has served in the Middle East commanding troops and implementing policy multiple times.

Explain the “Middle East crisis” and our military objectives in Afghanistan. I would not characterize the situation in Afghanistan as a crisis.  There has been a peaceful transition of political leadership for the first time in the history of the Afghanistan.

Nine million Afghans showed up to vote, [and that] demonstrates a significant percentage of registered voters; most Afghans see their government and the election process as legitimate.  The Afghan Security Forces successfully secured a presidential election, a run-off election; [and they] executed operations during this fighting season in the lead.  The new Afghan President signed the Bilateral Security Agreement, which is the agreement that ensures NATO and international support to Afghanistan for the future.  Confidence is running high in the government and security forces.

The militant Sunni extremism that spilled into Iraq from Syria, and virtually defeated the Iraqi Army in the Sunni areas of Iraq was a shock.  I don’t think anyone expected the Iraqi Army to dissolve like that.  The “crisis” is the rise of Sunni extremism, and it highlighted the weakness of the Iraqi state we helped to develop, whose armed forces we trained and equipped.

A criticism of our presence in the Middle East, especially Iraq, is that as soon as we leave, so will the prospects of liberty.  To what extent do you feel we need a continued and substantial presence in Afghanistan and Iraq to affect real change and allow democracy to flourish? The properly constituted, democratic government of Iraq voted for us to leave.  The government in Iraq was dominated by Shia interests, which alienated the Sunnis.  [It] focused on ensuring the power and control of sectarian interests, and this helped sow the seeds for the alienation of the Sunni population and the eventual support by Sunni Iraqis for the ISIS movement. I think we can help provide stability, but, ultimately, the Iraqi government needs to be able to stand on their own merits. . .  I think a small [American] presence that trains and advises the Iraqi security forces is adequate.

What happened to Iraq is a cautionary tale for the government in Afghanistan.  The current situation is a tremendous opportunity for our country; I’ll touch on that later. *

Share your thoughts on ISIS and Iraq. ISIS [Islamic State in Iraq and Syria] in Iraq is really a geo-political manifestation, a Sunni reaction to the brand of pan-Shiaism sponsored and supported by Iran.  Iran sees itself as the religious and political power of the region, and has successfully expanded its influence into Iraq, Syria, and the Levant.  Sunnis are fundamentally threatened by pan-Shiaism and the expansion of Shia influence in the Middle East.  Iran’s development of nuclear technology and a nuclear weapon threatens Sunni power, and Saudi Arabia in particular.  ISIS is an extremist group that serves as a proxy Army for a geo-political struggle.  The Government of Iraq is widely seen as a proxy of Iran.

The Sunni population embraced the ISIS movement in the same way that they embraced Al Qaeda following our invasion and the dissolution of the Baathist regime and the Iraqi Army following our invasion in 2003.  ISIS has misused their power in the same way that AQ did – the Iraqi Sunnis made a deal with the devil, and are starting to reject their brand of extremism.  Iraqis are secular and not happy with the Shia dominated government in Baghdad, but are not ready to submit to the violent extremism that has been uncorked.  This is a great opportunity for the Iraqi government if they can figure out how to be less secular and more inclusive — and support the rising tribal rejection of the ISIS movement.

ISIS is dangerous because they are not bound by the rationale that influences the decision making of traditional states; they are willing to resort to extreme measures, [such as] terrorism, mass murder, WMD,  to accomplish their goals.  At their core, they are a group of malcontents.

Do members of the Armed Forces trust our political leadership?  We have civilian control of the military in our democracy [and] democracies are short sighted; we change our national leadership every four years and our political leaders are obligated to their constituencies, mostly local concerns at the expense of a consistent national policy. All I ask for from our civilian, political authority is leadership, not just political judgment, but a judgment of the greater good for the long term station of our country in the world.

Right now the People do not have skin in the game, and there may be a lack of real accountability on the decision making and policy competency of our national government. The People must be involved and vote their conscience.  Leadership means making unpopular decisions; it requires moral courage.

What did we not cover? What else do you want Americans to know on this Veterans Day? It is the duty of “Americans” to educate themselves, to be involved, and vote their conscience based on the demonstrated leadership and character of political leaders.  We that serve and put our lives on the line ask that our People participate in the political process, and hold our civilian authority accountable.

We will do our duty regardless; we are counting on you to help ensure that our sacrifice is not in vain.

*          The ongoing ISIS conflict in Iraq and Syria provides us an excellent opportunity to facilitate stability.  First, it gives us the opportunity to normalize our relations with Iran.  Iran is threatened by the Sunni extremism, and some cooperation to stem this extremism allows us to re-establish productive diplomatic relations with a regional power.  A productive relationship could translate over time to more influence with Iran, and, particularly, the nuclear issue that threatens the region — Saudi Arabia and Israel.

Second, the ISIS movement is a magnet for a lot of ne’er do wells in the world.  This movement provides a common threat to the Middle East. We are exerting our military power to help provide confidence to our allies and potential allies.  This gives us the chance to help provide stability, and cement ties for future productive cooperation, and probably allows us to get back into a security relationship with Iraq for the foreseeable future.

The ISIS movement lacks discipline.  They are really a group of bloodthirsty thugs that are out of control, and over stepping their power and authority with local people.  They will self-destruct, and our allies in the Middle East with our support [can] overcome this threat and reinforce their legitimacy.  And, we will be in a position to help foster a more inclusive policy that prevents the re-emergence of the next potential extremist movement.  ISIS exposes a lot of very bad characters to attrition. This may seem very pie in the sky, but I see a lot of opportunity to help bring more stability and cement relationships in a strategically important region.

This Veterans Day, we thank Colonel Mintz for his lifelong service to our nation, the sacrifice he makes on a daily basis, and the inspiring leadership he provides his troops. Welcome home.

And to all veterans, thank you for your service.