Election results are in.

A news anchor announced last night that Congressman Michael Grimm from Staten Island won reelection, though he faces 20 counts of fraud and a pending federal indictment.  Then she asked, “What does that say about the other candidate?”

Just who are these politicians?

The arena seems replete with liars, power mongers, narcissists and a few misfits and miscreants too.  The good candidates hardly stand a chance.  But we root for them and hope for their success. Though let’s admit that the talented and the industrious usually do something else with their lives.

Advice on governance seems fitting given the current state of affairs.  And who better to provide such counsel than the idealist Don Quixote and his squire Sancho Panza?

Sancho prepares to take office as governor of an island and Don Quixote hastens to lecture him.  In a span of five pages, Don Quixote shares guidance from 400 years ago suitable for any politician. 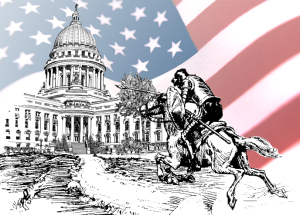 Don Quixote on the qualifications of politicians

As far as I am concerned, you are, without the slightest shadow of a doubt, a dunderhead, yet without rising early or staying up late, or taking any trouble whatsoever, thanks only to some of the spirit of knight-errantry that has rubbed off on to you, you find yourself the governor of an island no less, just like that.  I say all this, Sancho, so that you do not attribute the favour you have received to your own merits but rather give thanks to God. (Cervantes Part II, Chapter XLII)

How would Don Quixote govern?

‘Pay attention, my son, to this your Cato, whose desire it is to advise you and be the guide to lead you to safe harbor from this stormy ocean into which you are about to venture; for these positions of great responsibility are nothing but a gulf of confusion.

‘First, my son, you must fear God, for in the fear of God lies all wisdom, and if you are wise you cannot ever err.’

‘Secondly, you must always remember who you are, and try to know yourself, which is the most difficult knowledge of all to acquire. . .

‘Glory in your humble stock, Sancho, and do not be ashamed to say that you are descended from peasants; because when people see that this does not embarrass you, nobody will try to make you embarrassed about it; and take pride in being a humble and virtuous man rather than a lofty and sinful one.

‘Sancho, if you make virtue your method, and you take pride in doing virtuous deeds, you will not have to envy those descended from lords and noblemen; because blood is inherited, and virtue is acquired.’

Don Quixote on the law and compassion

‘Never make your whim the measure of the law

‘Whenever leniency can and should play its part, do not apply the full rigour of the law to the delinquent, for a cruel judge does not enjoy a better renown than the compassionate one. If you do bend the rod of justice, let it not be with the weight of a gift but with the weight of mercy.

‘When you have to judge a case involving one of your enemies, forget all about your grievances and concentrate on the facts of the matter.

‘If a beautiful woman comes to seek justice, turn your eyes away from her tears and your ears from her lamentations, and ponder over the merits of her plea.

Don Quixote on the outcome of such governance

‘If you follow these rules and precepts, Sancho, your life will be long, your fame eternal, our rewards abundant, your happiness indescribable; you will marry your children to whomsoever you please, they and your grandchildren will have titles, you will live in peace and enjoy everyone’s approbation; and as you come to the end of your days death will overtake you in your tranquil, ripe old age, and your great-great-grandchildren will close your eyes with their tender, delicate hands.’

Sancho, the illiterate farmer and heretofore squire of Don Quixote, informed the Duke on his request to dress the part of governor, “They can dress me up as they please…Whatever clothes they put me in I’ll still be Sancho Panza.”

After lengthy discussion on these topics with Don Quixote, Sancho replied, “Sir, if you don’t think I’m up to this governing, I’ll give it up here and now, because I’m more concerned about the smallest snippet of my soul than the whole length of my body.”

Sancho governs well, to the surprise of everyone and despite concerted attempts to foil him.

Imagine where we’d be if today’s elected officials were as mad as the ingenious Don Quixote or illiterate like the squire Sancho Panza?