Number One Deterrent for Burglars or Anyone Else Visiting Your House 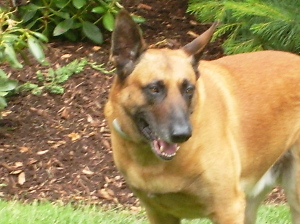 Ten years ago our lives changed.  A lot.  We don’t do things by halves in our family, so we moved into a new home, I gave birth to my third child, and if that was not enough, we bought the biggest, baddest dog we could find.  A third pet.  I’ll share more about that later.  First, you need some background information.

Florida was my husband’s last duty station in the Army and we moved into a gated community.  We found this appalling at first, because we always lived in open communities and wondered just how bad things had to be to put up gates.  But people like them because they provide security, a term I use loosely and one of ongoing debate.  The community guards were not armed and eventually given new job titles, Access Control.  So we joined the masses of well-to-do families and lived behind gates.

A few months after the baby was born, we left our house for the first time to see Yanni in concert an hour away.  Our sitter called on the way home afterwards, saying that police officers were patrolling our backyard and there were 14 police cars on our dead end street.  She heard propellers from above and said that a chopper was hovering over our house.  She was very worried about her car  (WHAT?$ really?) on the street and wanted to know what to do about it.  We asked her to check on the kids and the baby then told her to lock the doors and turn off the lights. Forget the car.  We had a 40 pound Australian shepherd which she locked in her crate.  We told her to let the dog roam the house because she would bark at any activity.  The officer informed our sitter to stay inside because a teenager armed with a rifle had left his house after an argument with his father and jumped the wall by the lake adjacent to our house.

So much for gates.  That was one of the longest car rides of my life.

We got home and the sitter was rattled.  There were a couple squad cars outside and the gate guard said they moved on to another community where the teen was discovered the next day and taken into custody.  This was the third of several serious security breaches on my street.

Most people invest in locks and an alarm system.  But after one night of research and analysis, my husband decided to get a Belgian Malinois from GatorlandK9 (GatorlandK9). Our good friend and military police officer said dogs are the number one deterrent for criminals and if that’s not enough, Readers Digest interviewed convicted burglars who shared, “The two things I hate most:  loud dogs and nosy neighbors.”  ( Article )

Our new and improved security system was our dog Kaiser.  Named after my duty station in Kaiserslautern, Germany and his European heritage, his name Kaiser means emperor.  This is the breed of choice for many K9 police and military units.  His protective nature, speed, sense of smell, agility and hearing made him the ideal solution.  We thought so anyway.  The breeder who did this full-time screened us:  did we have experience with dogs, why a Malinois?  Then he told us not to neuter him; he would always take the dog back as long as he wasn’t neutered.  This was a working animal and he needed the edge.

Most people weren’t familiar with this breed but Kaiser became more popular when the public learned about his breed’s role on Seal Team 6 in 2011.

When U.S. President Barack Obama went to Fort Campbell, Kentucky earlier for a highly publicized, but very private meeting with the commando team that killed Osama bin Laden, only one of the 81 members of the super-secret SEAL DevGru unit was identified by name: Cairo, the war dog. Cairo, like most canine members of the elite U.S. Navy SEALs, is a Belgian Malinois. ( http://navyseals.com/2163/the-dogs-of-the-navy-seals/ )

Our dog Kaiser was powerful, one of the largest at 100 pounds. His black face, size, speed and bark kept the mail woman, the UPS man, the FED EX man and every other person within a few hundred meters away.

He was more than we ever imagined.  As a working dog, he needed a job and things were often boring in our family.  I had him on an invisible fence but he ran the length of the front yard, terrorizing people and pets, so I set up a back yard enclosure where, like a lion on the Serengeti, he tracked golfers and their carts all day.  The up side was the golfers didn’t come into our yard anymore.

The kids next door were intrigued and even more so when we told them not to go near him when we weren’t around.  So naturally they threw stuff at him and found his fence an easy way to antagonize him.   One day the older boy came by to drop off a package and Kaiser pulled him down before he could get off the property.  Another time, his brother stopped by the house and my children came running to tell me Kaiser had him down.  Indeed, the boy had curled into the tortoise position and Kaiser had his muzzle around his neck.  He didn’t bite though.    The boys no longer terrorized him but I was worried.   We told their parents we would take the dog back to the breeder.

Here’s the thing.  Their son wrote a note to us saying they all loved Kaiser and he was only doing his job, protecting us and the property, that he should not have bothered him.  Who was I to argue?

As Kaiser grew into his huge paws, he could knock us over with his massive amount of muscle moving at awesome speed.  He was bred for obedience, protection, and tracking and we were consumed raising our family. This meant that as a high maintenance obedience dog with little oversight, he found his way into trouble.

He shredded 7 basketballs, or was that 17? Baseballs, kickballs, toys – too many to mention.   He destroyed our flower beds, our plants, and postponed deliveries.  Delivery men knew the deal.  Kaiser guarded our home with an unparalleled ferocity and never once did I worry about criminal interest in our property.  We still can’t figure out how he killed those water moccasins in our back yard without getting bitten.

My husband said whenever he heard a noise or unfamiliar sound, especially in the night, he waited for Kaiser’s reaction.  His exceptional senses would alert us if something was wrong.  If he didn’t react, then we knew all was well.  Only once at night in the last decade did Kaiser begin growling and barking in an exceptional way.  Mark grabbed his ironwood cane, went downstairs, and looked outside.  On the front lawn, fifty feet away, two coyotes were walking in the snow.

Kaiser didn’t like men either, in particular those unaccompanied, and one time a new pool contractor stopped by without checking in.  I heard a rumpus of human screaming, deep throated barks and growls, so I leapt to my feet.  One man had Kaiser at the end of his pool skimmer while the other backed out.  I have seen grown men, large men well over 6 feet, tremble, their eyes darting, looking for escape.

Among the contractors and regulars, Kaiser was legend.  I know, I’ve listened to stories, witnessed encounters, looked at handwritten and typed notes.  The builder of my current home visited recently, some six years after we moved in.  He called to make sure I put Kaiser in the garage.   When he was leaving, he told me Kaiser stories that still had him laughing.

My family was Kaiser’s pack and frequent visitors, especially the kids, learned that he was a sweet dog.  A noble dog. I told them not to tell anyone.  He was great security.  Every time I opened the door of my car, there was Kaiser.  When he came up to me, he would stand on my foot, the oaf.  When he wanted to know what we were doing, he stood by the porch door, but he also wanted in.  And like the emperor himself, he expected to get what he wanted.  He stood there, royally, not making a sound, waiting.

My daughter’s friends visited last month and we introduced them to our dog.  The girls went to jump on the trampoline and forgot the cardinal rule:  to take your shoes off, yes, but to take them on the trampoline with you.  The smell of feet, the draw of the pack, and the excitement were just too much for him.  Kaiser bit through her boot heel.  We apologized.  Whether you liked dogs or you didn’t, there was no avoiding Kaiser.  He engaged with everyone and he engaged with life.

We put Kaiser down today.  The lymphoma advanced too far.  There’s not much to it; you take the dog to your vet and he gives a pink injection which sedates him, then overdoses him, stops his heart.  We held him as he took his last breath.

Life is precious and short.

Love each other.  Forgive.  Enjoy.

Kaiser, our protector, our companion, our beloved dog