Spirits of the Fall: True Stories of the Season

This is the fourth in a series of True Stories for the season, of eerie occurrences, real-life horrors, visits from the beyond and haunted rooms.

My husband Mark and I hosted a reunion for his family on Upper Saranac Lake. The rental was a great camp which I learned had nothing even resembling what I used to think of as a camp, a kind of roughing-it in the wild with log fires and black flies. None of that.  This camp was situated at the top of a hill on twenty acres that overlooked the lake, with water frontage for taking out kayaks, canoes, or the pontoon boat. The décor was the stuff of Adirondack shops, because well, this was in the Adirondacks. Antlers and taxidermy, wood carvings, hides, tanned leather chairs, stone fire places, outdoor fire pits. My thigh was black and blue from jabbing a sharp carving planted in between rooms, attacking me without notice when I wasn’t careful, an omen of sorts.

The camp was located miles down an access road and so remote that when we sat outside at night, the sky was brighter than an observatory. The heavens were aglow with planets and stars and shooting stars; I had never seen so many shooting stars or experienced such a vivid night sky.

My sister-in-law Shanna and I were night owls and chatting away late into the witching hours when we heard an other-worldly deep guttural skirmish coming from my bedroom. I looked down the long hallway and we heard it again. It was deep grunting, broken and loud and indistinguishable words.  Was it human and was it coming from my room? Mark had gone to sleep so it could not be him. If it wasn’t him, then what was it? And was he OK in there? The house had been stone quiet other than us, the rest of the children and family long asleep.  Shanna and I looked at each other again, my eyes wide.

I needed to check on Mark because our room was the only one on that side of the house. I stood and walked down the hallway, turning on the light as I approached the door. I turned the knob and pushed it slowly open, leaning back and ready to make a fast escape. The room was dark and as the light fell in, I blinked.  I saw the shadowy outline of a figure beyond the bed and lightning quick movement. I was all nerves, standing on the balls of my feet, blinking multiple times to let my eyes adjust to the darkness. The bed was empty. The figure was wrapped in sheets like a toga, beyond the tall wood posts at end of the bed.

The figure turned its head towards me. “I got that one!” he grunted as he pointed with his left hand towards the foot of the bed. Then turning his head towards the outdoors, he said. “And there are two more over there!!”

The figure was Mark and he was fighting, in mortal combat at the foot of the bed and in front of the glass overlooking the lake. The sheets entangled around him, Mark said he was fighting three of them from the top of the hill and down into the lake. He’d taken one down and was engaged with the other two when I entered the room. Mark saw me during the fight. I had to talk to him several times to convince him everything was ok, that he must have been dreaming. He said he wasn’t dreaming. He was awake. I told him I didn’t see anything. I was worried he was going to bloody his hands against the wood post or worse, send his fists through the glass sliders not far from where he was fighting.

“They were there,” Mark said and he still says. They had bad intentions.

Our nephew Brady said the spirits in the camp were strong. Sitting on the boat one day he said my deceased father was visiting, which took me off guard. Brady has this thing with second sight, an extrasensory perception, a connection to the spirit world. It was something that ran in his mother Shanna’s side of the family. Mark was convinced that people had come into the camp, that they were bad, and he had to fight them. Afterwards, Shanna said that Brady had felt spirits in the camp and said this. There are bad spirits here, but don’t worry. The good spirits will keep us safe.

As a toddler, not long after Brady and his parents moved to a Gillette Wyoming, Brady told his parents about his new friends Frank and George. They were kind to him and seemed to have taken a liking to Brady. Grandma Beth came to visit. She was a teacher and a pragmatist, a down-to-earth kind of woman. They took Beth to the local Museum.  As they wandered around, Brady saw the two men who were his friends in photos on the wall. His parents and Beth looked at the names noted in the caption. Beth shook her head in disbelief. Brady was two years old and hadn’t learned to read yet.

Shanna explained. “Brady’s first friends were Frank and George. They were with the house when we moved in. Brady was two but extremely verbal. Frank was with him most days. He would bring George along often. When we would leave the house, the friends stayed behind but would be there when we returned. When we went to the Rockpile Museum there was a wall full of old photos.”  Brady pointed out the two men from the many men in photos on the wall. The names were listed as Frank Murrey and George Durley.

When he was three years old, Brady said he had a guardian angel. He was with him often and his parents accepted this. They learned more about his guardian over time, his name, how he died, that he served in the war. Eventually the parents, Shanna and Joel, did some research and found his guardian angel, a soldier. Spirits and guardian angels, were they the stuff of a healthy imagination? I was not sure. His parents were loving and supportive, not discouraging but curious and attentive.

Shanna shared this. “Brady told me his [guardian angel] name was Alibia. I had no idea how to find him. I didn’t even know how to spell the name. Brady had to really be concentrating on something like building with Legos or playing with action figures. Then he would talk about one of his “friends” and give details. It was a rare occasion that he would sit down and answer questions. When he found Alibia he was older than when he met Frank and George so he was able to provide more details. With Alibia, Brady came in to the living room from his bedroom and told me that Alibia is his guardian angel’s name from heaven but he also has a name on earth. He gave me the name, Patrick Augustine White. He [said he] was Irish and [I] found his picture was on a website. I was thinking [Brady] was wrong because the Irish didn’t fight alongside the Americans in the Korean War. I was wrong.” 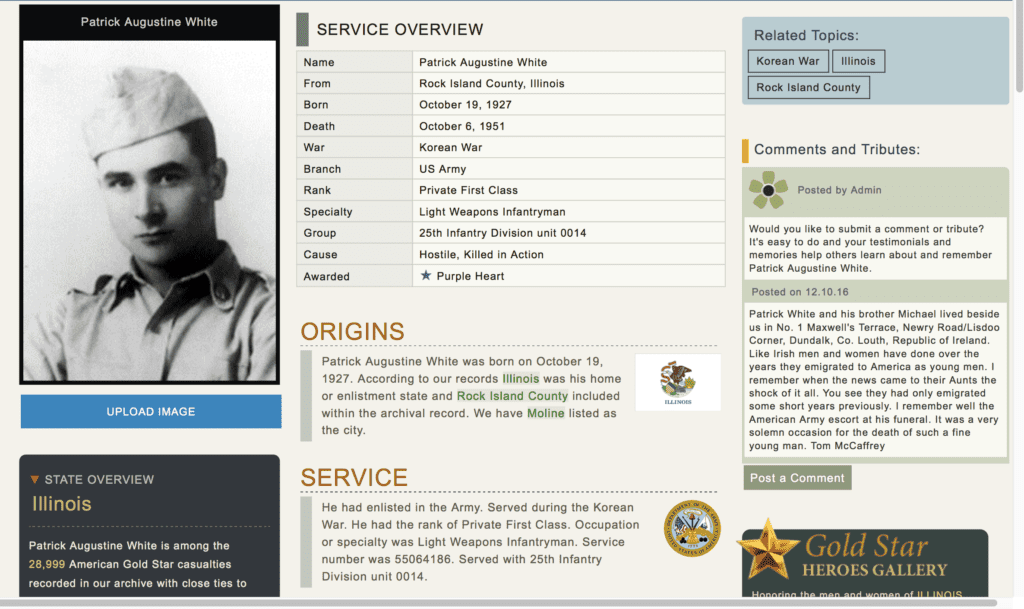 Joel called his brother Mark one day. Brady had told him about his great grandfather; he said that he made clothes and he was wearing a white suit. Joel and Mark’s grandfather died in 1940 so they had never met him or spoken about him to Brady. Isadore Shattan had a tailor shop in Kingston New York and he was known to wear white suits. They haven’t seen photos of him in a white suit but their father had mention it when he was alive.

Brady is a teenager now. Earlier this year one of Joel’s coworkers posted a disturbing photo of a presence or a person at her child’s crib. Joel showed the photo to Brady, curious what he thought. Brady looked at the picture and said it captured both her children. Joel explained that the coworker had only one child. Brady said that she likely had a miscarriage but it was her other child. Joel shared this with his former coworker. She told Joel that yes, she had a miscarriage. In the photo screenshot, you can see the face between the slats of the crib. The photo is posted on the website. 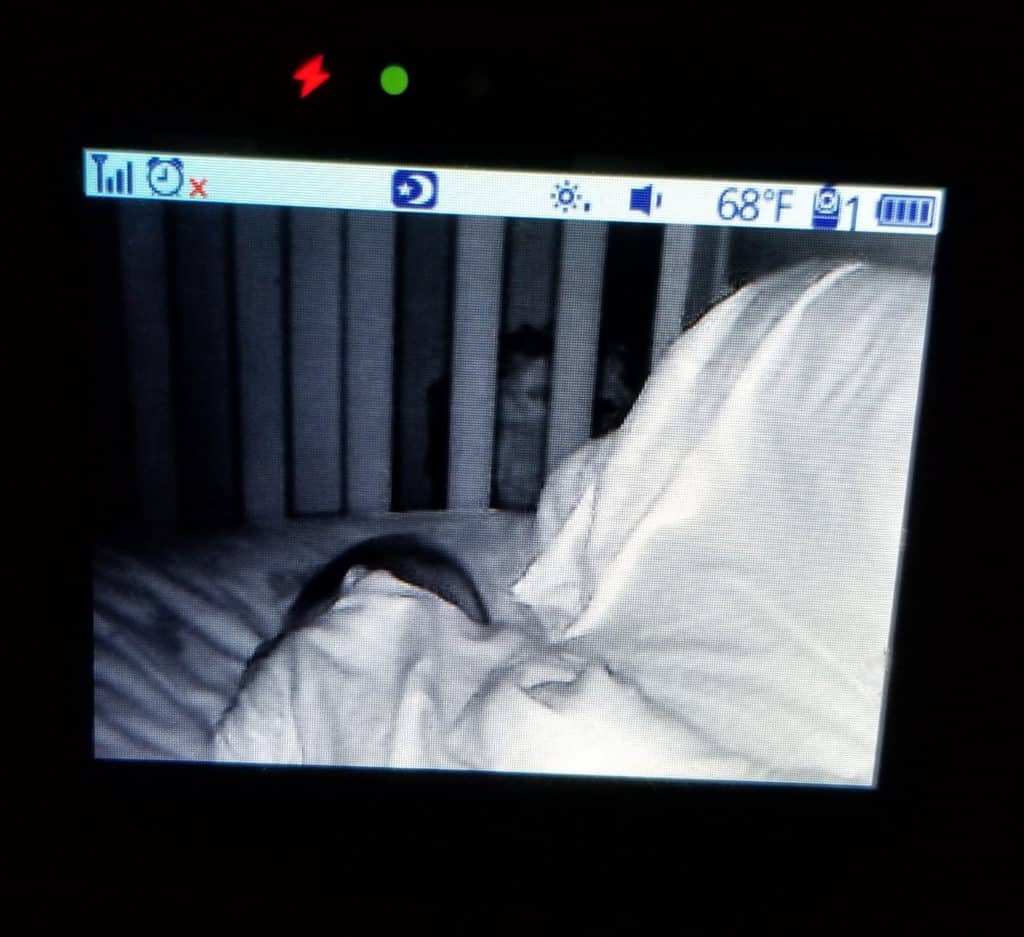 Family coworker is upset about the face by their child’s crib. Brady explains the presence.

Brady joined the podcast for this special episode in the series to talk about these experiences.

I read an essay about a blind man who wrote with incredible detail about the sounds in his day and in his life. When we lose one of our senses, the others become heightened, more acute. I wonder if children have a natural openness and extrasensory perception, a vision beyond the veil or sixth sense that they lose as they grow older. In the last episode I discussed this, the many certified healers and mediums today, educated with all manner of degrees, available at the click of the mouse.

When I asked Brady if he felt his vision was strange or if he ever felt scared, he said it was the way things were for him. Like others in his mom’s family, these things were just natural.