The Light in Your Day – A New Take on Winter 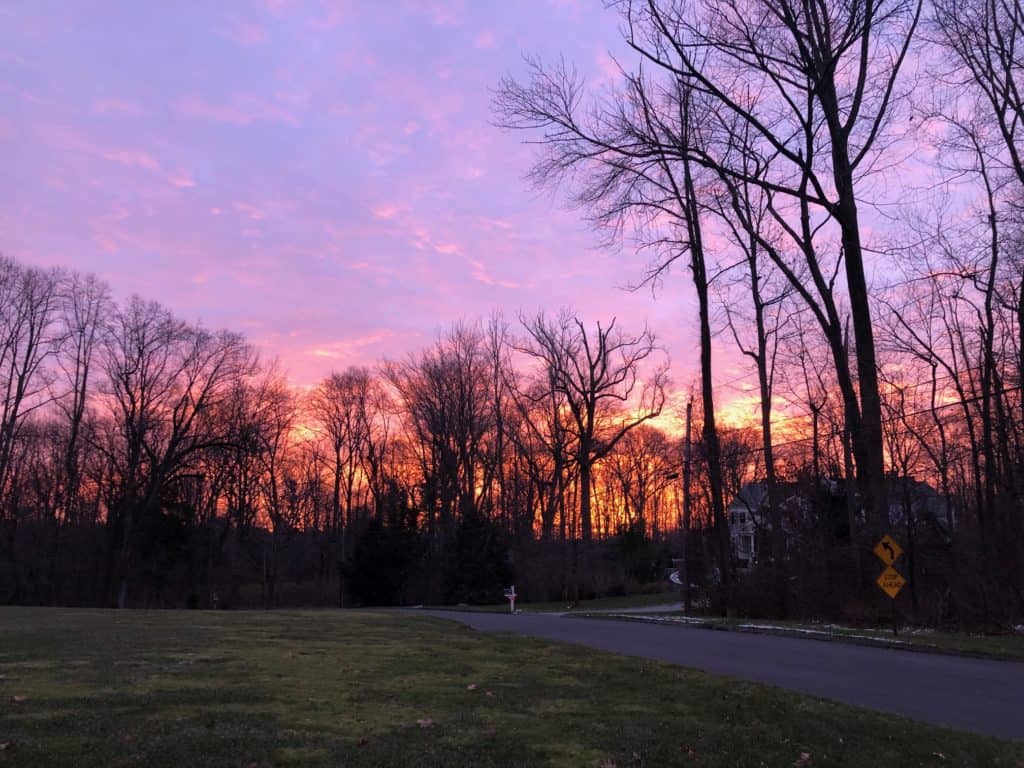 December Sunrise outside the Tree House

It’s winter; the holidays have passed. It’s a new year and a new decade. Each morning, I’ve been checking to see how much earlier the sun rises, its orb in the poplars outside my windows a rosy welcome to the day. This January, the sun rises forty seconds earlier to over two minutes earlier each day, by the end of the month. In Stamford, Connecticut, forty miles New York City, we will see a 13 minute earlier sunrise on January 31 than we did on the first, and a 33 minute later sunset, totaling over 46 minutes more daylight in just the first month.

The winter solstice occurred December 21. The solstice is a marker of the shortest or longest day of the year, the point when the sun is at its lowest or highest point in the sky. The December solstice is the shortest day in the northern hemisphere. In my neck of the woods, that translates to 9 hours and 13 minutes of daylight. And the summer solstice in June is 15 hours and 7 minutes of daylight. Rounding up, that is close to six hours difference in daylight between the solstices, where I live.

The sun is a welcome intruder in winter and every day now, we are gaining more light. My city is 41 degrees North Latitude. Where you live, north or south of the equator, affects the amount of daylight you have. Hang on for those of you who live elsewhere. I have interesting data to share about the light in your days.

January Sun Chart from TimeandDate.com for the city of Stamford 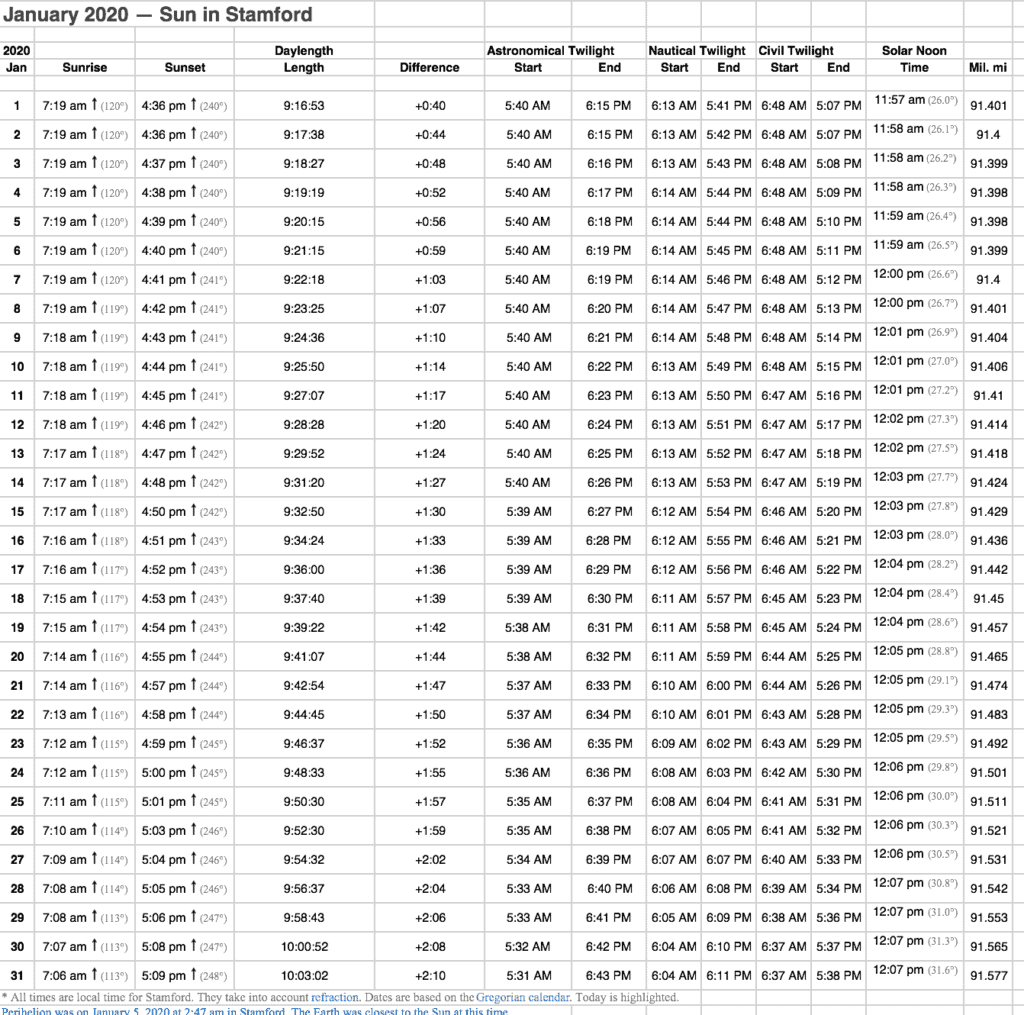 First and second columns are Sunrise and Sunset each day, with day length in third, and daily gain. Visit timeanddate.com site to learn about three kinds of twilight

The United States and the Northern Hemisphere

The pattern for all of us in the Lower 48 states is the same. In February, a leap year, from beginning to end, I will gain 70 minutes of daylight and in March, 82 minutes. That’s right 1 hour and 22 minute-gain of daylight over the course of March alone. Spring this year begins on 19 March, or the vernal equinox, which are Latin words for when day equals night, in the spring. It happens again in fall. You know this. The autumnal equinox is September 22 this year.

Coming out of the gray hold of winter, we will see more rapid increases of daylight, right up until the equinox, or the first day of spring. This works south of the equator too, but it’s a flip flop. That is, our winter is their summer; our spring, their fall.

To keep it simple, which is important for me, I pulled out the atlas then checked the coordinates for cities in the middle latitudes of the country. So, for those who live elsewhere, here’s a sampling. The Lower 48 of the U.S., from Key West, Florida to Sumas, Washington, the southernmost and northernmost points has a difference in latitude of roughly 24 degrees.

That puts the middle latitudes of the country around 36 to 39 north latitude. San Francisco, Denver, Kansas City, Louisville, and Virginia Beach run along this range. Since I have readers in California, I’ll share info on San Francisco at 37.77 North latitude. For a point farther south I chose Tampa at 27.95 degrees, because I lived there.

In San Francisco during January, residents will gain 41 minutes of daylight, in February 62 minutes, and in March 72 minutes.

For Tampa, residents will gain 27 minutes in January, 43 minutes in February, and 50 minutes in March. For a southern city that’s a sizeable gain, especially since Florida boasts 361 days of sunshine a year too. 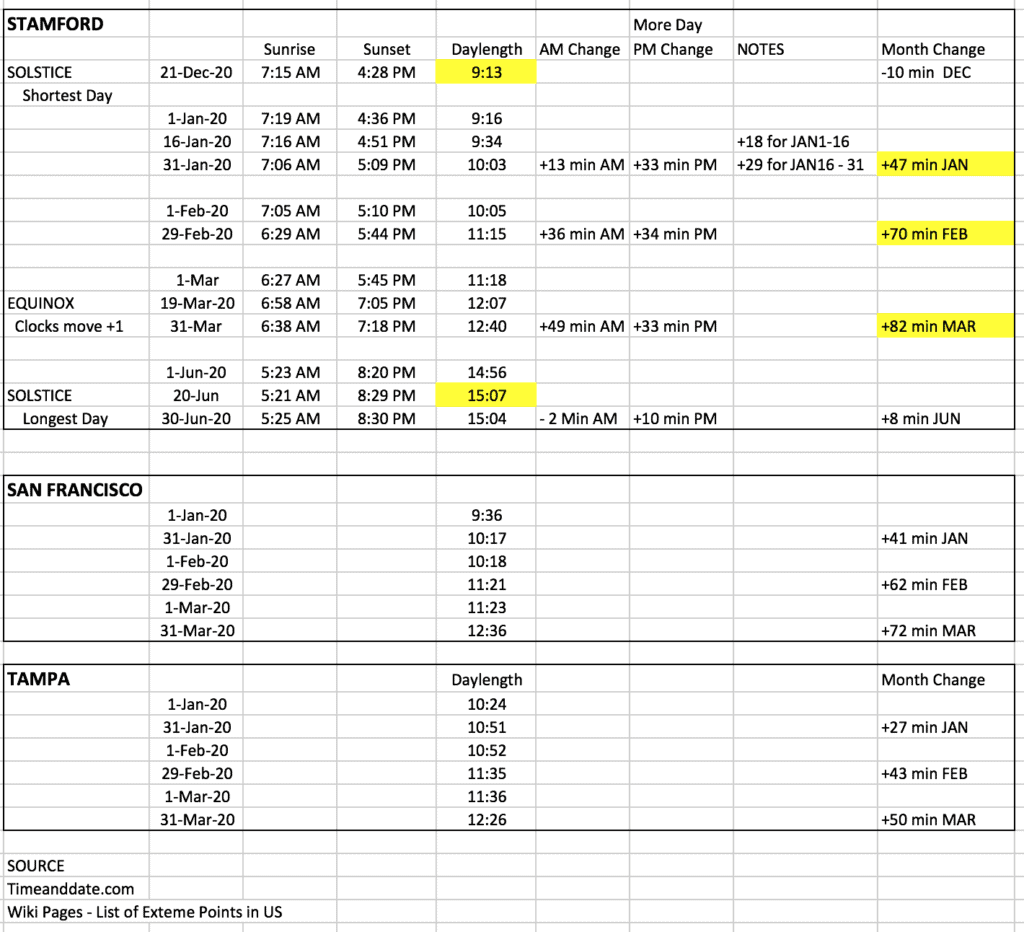 The thing is, the father north you go, the more you have to gain. That is, after the winter solstice, the faster the light comes back into the world each day. And, the more of it. Folks on the equator have 12 hours year round, but I know I’ll have over 15 hours in June. The seasons can be stark in New England, with volatile winters or flamboyant autumns. And winter can be hard on the spirits and my health. Yet, I’m talking about daylight.

For all of us in the Lower 48, the days are getting longer. And, if the weather cooperates, that extra 13 minutes in the morning by January’s end is enough time to walk the dog, skim the paper, or just sip a warm cup of tea. And the 33 extra minutes of light at the day’s end, that’s not so bad either.

February will bring with it more light and March brings the biggest leap of all with 82 more minutes illumination, from that most brilliant star. Hard to imagine a better gift than that. 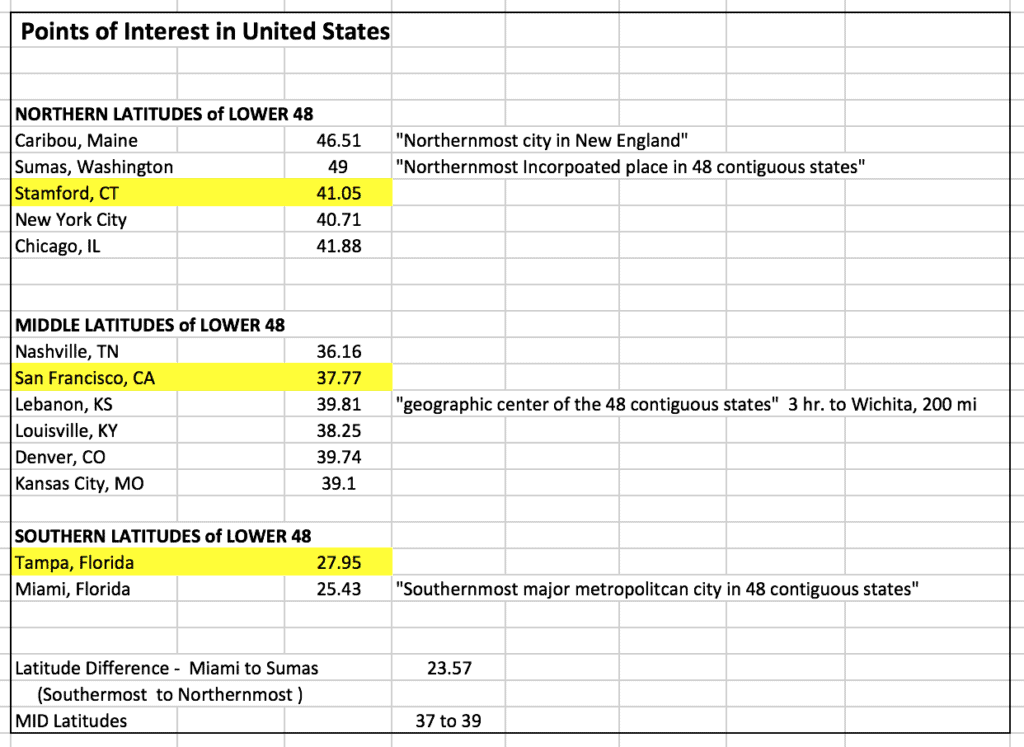 Both sites are riveting, especially for insomniacs, geography buffs, and Jeopardy enthusiasts.

**List of Extreme Points in the United States, Wiki. This is a list of points in the United states that are farther north, south, east, or west than any other location in the country. Also included are extreme points in elevation, extreme distances, and other points of peculiar geographic interest.