A friend lamented the lack of grammar taught in schools and I said that English was out of fashion. What passed for writing in grade school amounted to stream-of-consciousness and emotion-riddled drivel, and to what end: to avoid stifling creativity and feelings. What are creativity and feelings to the blacksmith without a forge or tools or anvil? What is the wordsmith without vocabulary and grammar and style? In a digital world, many will know me only through my writing. We are all wordsmiths today. What the schools have produced are generations of students who don’t know how to write. I know this, because I was among them.

I’m here to help you, to help my children, as well as, to help myself.  I love to read books on English, grammar, and usage, and the two books I’m reading are Dreyer’s English and Brandon Royal’s Little Red Writing Book.  That’s a play on little red riding hood, and when the title is spoken aloud, it is easily confused with the fairy tale. The book has a red cover and chapter headings with sketches, often inspired by Little Red. 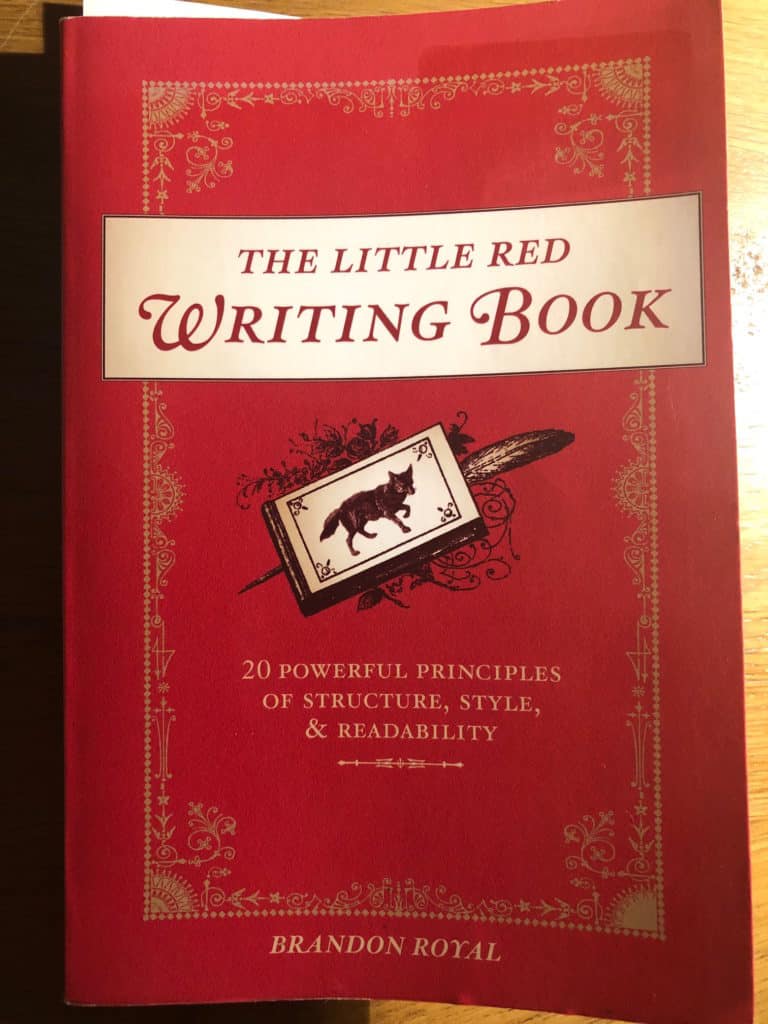 Royal’s book is broken into four sections: structure, style, readability, and grammar. Within these, he writes about twenty powerful principles, each of them readable, concise, and clear. He includes exercises, as well as four useful and simple appendices. The whole guide is 160 pages. It’s helpful for young and experienced writers.

Royal has an impressive bio. What I found compelling was his description of himself: I am an accountant by training, an anthropologist by disposition, a writer by choice, and a bar patron by preference.

Two parts of the book that I will  discuss include a grammar review and writing principle. The author is clear that this is not a book on grammar, though he touched on grammar basics and the eight parts of speech.

He explains that it is easy to confuse grammar with writing principles. Grammar differs from structure, style, and readability. Only grammar can be described as correct or incorrect, right or wrong. Structure, style, and readability may be effective or less effective, better or worse. Making something readable with white space and appropriate breaks for the reader is not a violation of writing technique. And, there is no magic line that separates succinct writing from verbosity.

It’s helpful to understand the rules of grammar, before breaking them. Writers break rules all the time. It’s also essential to know the eight parts of speech and how they function in a sentence. If you don’t remember, they are:  nouns, pronouns, verbs, adverbs, adjectives, conjunctions, prepositions, and interjections.

How many drafts are enough? Just when is it done?

The second chapter which I want to share is the summary or last principle: to go back and rework. To revise. For any serious writing, such as a resume, school assignment, or work memo, expect to write three drafts. The first draft, you get your ideas down. The second you edit what you’ve written, adding details, making connections, doing research and fixing mistakes. For the third, Royal says to wait 24 hours, then read again and make minor changes. For longer or professional writing, plan for multiple drafts over longer periods of time. Royal said to wait until the writing stands still, before you call it finished. I call this, putting it on the shelf. For longer work, I suggest a week, a month. 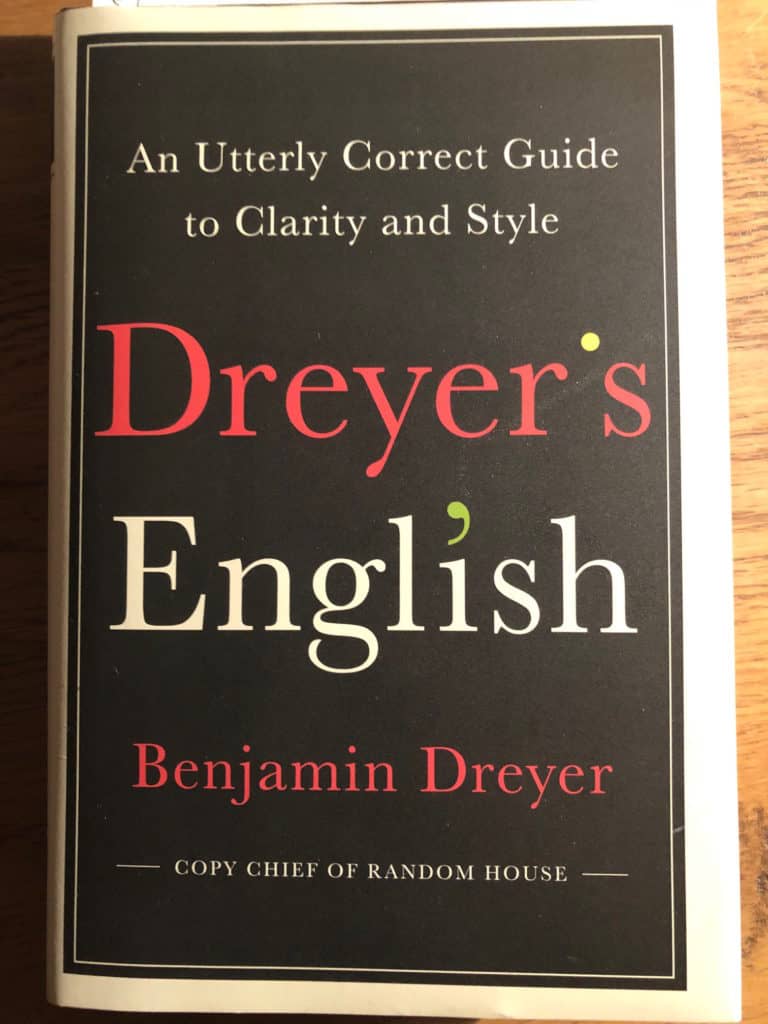 Dreyer’s English: An Utterly Correct Guide to Clarity and Style

Let me return to my conversation that got this all going and my disagreement with friends on the rule about not ending sentences with a preposition. I shared Dreyer’s three nonrules, and I hoped they were more amused than offended. The book was written in 2019 by Benjamin Dreyer, who is the copy chief of Random House. The tag line for the book is an utterly correct guide to clarity and style and the author’s name Dreyer is spelled with an E, as in Breyers ice cream, not the machine used for drying clothes. His humor is dry and eminently useful. This modern and witty guide is for everyone who wants to write better.

I’m still knee-deep in the book and it is the kind of work that you savor, set on the nightstand, and take in a section or chapter at a time. As a copy editor, Dreyer has seen a lot of stuff that’s been coming out of the publishing houses over the last three decades. He has been looking at writing and how it works on the page, how it doesn’t work, what’s effective, what’s not. It’s full of fascinating tidbits about English usage, assorted things to do and not to do.

The first chapter is powerful all by itself. If you take nothing from the book, you could take this advice and your writing will improve immediately. The chapter title is the Life-Changing Magic of Tidying Up (Your Prose). Nice and timely, right? You’ve tidied the closet and tidied your house, so why not your writing? That’s how many see me today, after all, through my writing.

How to do that? Here’s the secret sauce: his simple first recipe with all sorts of white space, set up in a column on the very first page of the first chapter, which is two pages and two lines long. Here’s the first challenge: go a week without writing these words.

Again: Go a week without writing these words: very, rather, really, quite, and in fact. Now toss in these.

Cut just that, just you know. And, cut out pretty, as in pretty cool, or really pretty awful, quite so, in fact. Dreyer adds a filler word of his own, a personal weakness: actually. Cut that too.

Dreyer has come to think of all of these as Wan Intensifiers and Throat Clearers. They come up in speech and casual talk and show up again on the page. Write them. Then cut them. If only for a week. Tidy up your prose and cut these twelve terms.

This leads me to my favorite chapter so far. The chapter is titled Rules and Nonrules of English. He says he has nothing against rules; they’re indispensable to play Monopoly or gin rummy. He’s a big fan of the rule of law. But, the English language is not so easily ruled and regulated.

That said, here are the big three nonrules.

This is the kind of arrant pedantry up with which I will not put.

Sounds ridiculous, right? Because it is, and according to Dreyer, Churchill never said it or wrote it. If Churchill followed these nonrules, he would not have been Churchill.

Dreyer shared a notable story about this last nonrule. I will retell it here as I had a chance to do at my Reading group. Though I had first shared the story, over cheese grits and blueberry cobbler.

Two women are sitting at fancy dinner party, one the matronly type in a Marx Brothers film played by Margaret Dumont. The other is a young southern belle, who for the sake of appearance is someone in a bright gown with lots of bling.

Southern Gal says to the Frosty Matron: So where y’all from?

The Frosty matron no doubt after giving Southern Gal more than a once-over replies: I’m from a place where people don’t end their sentences with prepositions.

Southern Gal pauses for reflection, then says, sweetly:  Okay, so where y’all from, bitch?

Har har. A friend on the other side of the grits, had taken up her phone, and ordered Dreyer’s English, on the spot.

In summary, DO start sentences with “And” and “But.” DO split the infinitive if it sounds better to you. If a sentence meanders its way to a prepositional finish, it may be weaker. Rewrite it.

For instance: What did you do that for?

Better: Why did you do that?

But, (here I go again, using the conjunction to begin a sentence) if avoiding a preposition is unnatural and unhelpful, then end with the preposition. It’s okay.

The sketch at the top of Royal’s grammar review is Little Red looking at the chalkboard with these three rules.

Notice if grandma has grown ears.

If grandma has developed fur… run!

And, it’s worthwhile to figure out which rules are vital!