“It wasn’t a cold war for us,” Billy said. “They caught us in their nets, the Russians. Usually 200, 250 feet below.” The pub smelled of Buffalo wings. Dart boards and arcade games flanked the walls.

“Sent a guy to cut us out. Had to come up to 75 feet.” Billy was a large man with strong hands, a steady eye, sharp memory. When we met at the funeral home, he told me he was from LeRoy, not far from Rochester. He retired from the army but loved his early years as a submariner. That was better than a helicopter mechanic, an option which would have taken him to Vietnam.

“It was good. They fed us lobster and steak,” he said. “We ran three shifts and were busy. They played movies.” A three month confinement in an underwater capsule seems like a prison sentence, but he didn’t feel that way.

I wore slacks instead of a dress to the memorial service and chatted with family, but I found it easy to talk with Billy. I told him about my tour at the end of the Cold War, which really was cold for me. We deactivated the army’s largest brigade, commanded by a brigadier general, an ordnance unit which stockpiled munitions and nuclear warheads. (History 59th Ordnance Brigade)

We sent them home, the missiles and the people. We shut down unit after unit, gave keys back to the Germans and moved. Soldiers and officers held “RIF parties” [Reduction in Force] to celebrate or mourn their transition from the service. The army was gutted, companies folded their colors, servicemen were forced out and others opted out.

“That happened to us. People took the money and left,” Billy said. “I took the bonus every time, for each enlistment.” He chuckled. 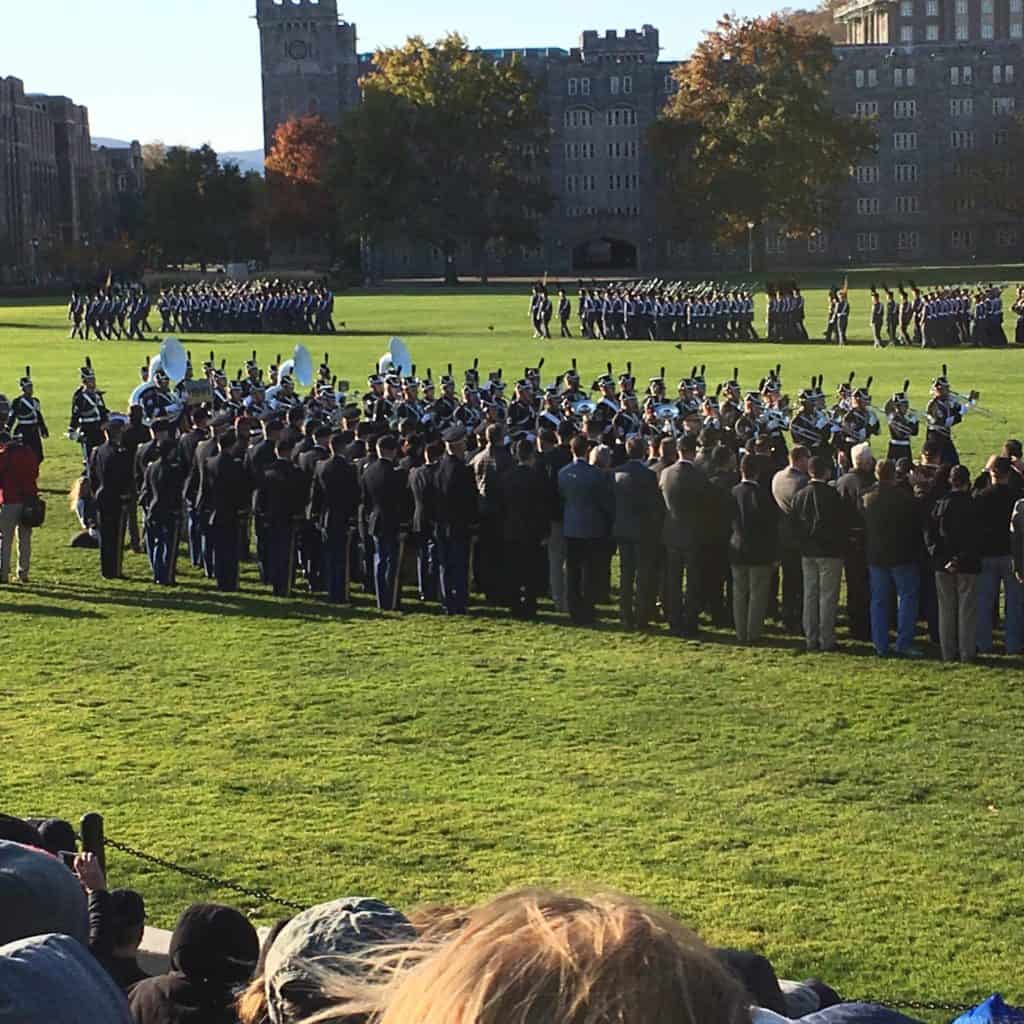 Cadet Parade with old graduates on line to review and inspect the ranks.

“Where’s Manny? It’s 7:30.” The crazy Honduran didn’t own a mobile phone. The parade began at 9 and we’d need an hour to make it to the plain.

I called his room and the phone just rang. Texted my company mates, and Papa Burton reached Manny Junior. They had slept through the alarm; going to bed past 2 AM will do that. “Papa” Burton’s nickname suits him well: even 25 years later, he’s still looking after his clan.

Built like a fighter, square jawed, fit and gray at his temples, Manny strode towards the lobby, arms swinging back and forth like a soldier. “Manny [junior] just got in the shower. I’m sorry, guys,” he said, head bowed.

With a heavy foot, we made it to Thayer Gate. We pulled into Mills North lot with 15 minutes to spare, huffed it up the hill, jogged along Lusk Reservoir with its 78 million gallons of water when the water is flowing over the spillway.

We pinged by the gym, holding our forearms parallel to the ground on the stairs, hearts thumping like plebes, the drums of the Hellcats beating from beyond the barracks.

“I think we can make it. Look! That’s them,” Mark said, pointing to a line of old grads marching along the plain.

We scurried through the spectators and leaped over a low wall and chain onto the grassy field to join our classmates. Several turned and a cheer erupted. When we got to the line, they gave us high fives and back thumps, pulling us into the fold. 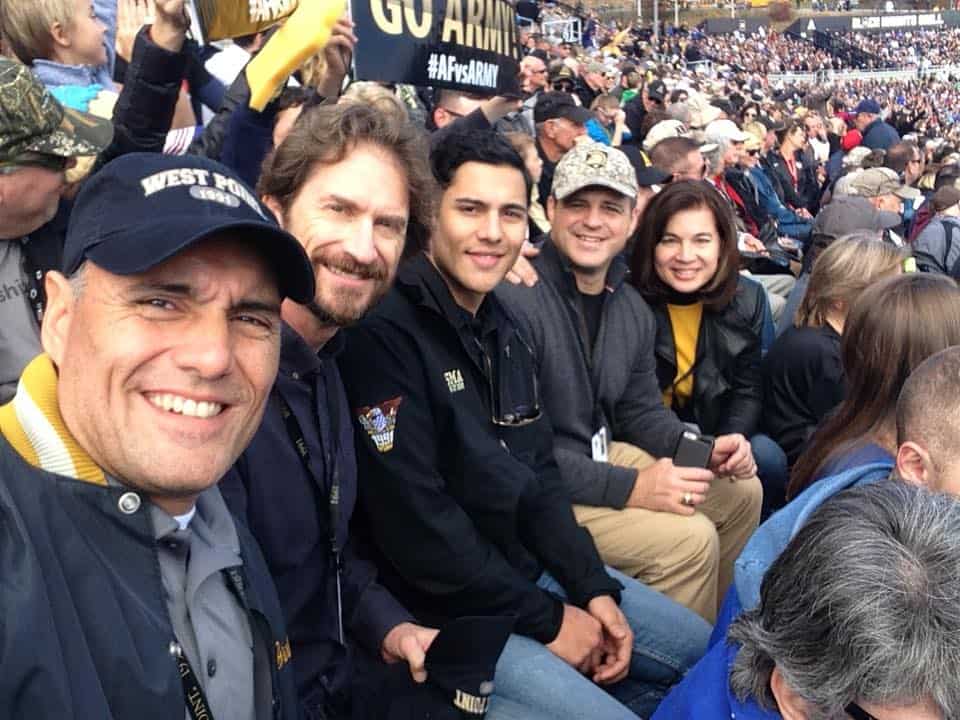 Manny and son make it to the parade and game.

“I hated DCLT,” Monique said. “Look I was good before I came to West Point, but you know, here, you’re just average.” DCLT, drill cadet leadership training, is no longer a program today, but it once offered cadets the chance to train new army recruits around the U.S.

“I’m sorry,” I said. “I liked it.” She told me they asked her why she couldn’t be like me. I never knew that and realized something about myself. Maybe I wasn’t a very good friend.

Monique was surprised when I told her I didn’t know how to run during basic training; I fell out of group runs. Luckily my squadmates Mike and Kenny believed in me, encouraged me to finish. And I got better. I moved from the remedial group to the fast group by the end of training, eventually earning a spot on the track and field squad and ultimately as team captain. Mike told this story to his soldiers to inspire them. After the experience, I believed that everyone could get better. I still do.

Monique is a nurse today and works in a critical care ward in Texas. She’s still serving. But there are new challenges. A successful black woman in an upscale neighborhood, she is often stopped by the police. On one occasion, she called about a suspect group of men in her back yard. When the police arrived they spoke with the men then interrogated her about her NRA sticker. Did she have guns? how many and why?

Six combat tours in eight years. TJ wore a lot more than his uniform at the cadet review, he wore the weight of his family, his fellow citizens, and his country. And he did it well; he did it without complaint. I looked at his wife who sat next to him at the tailgate, eating quietly with their son. Marriage is never easy, but here she was. Grace and quiet strength.

We visited Bradley Barracks which are now secured, so we waited for a cadet to let us in. When TJ walked in, the Delta Company, 2nd Regiment cadet in charge jumped up and called the barracks to attention. It’s not often cadets have a full bird colonel stop by unannounced.

Manny, Kenny, and I visited the sixth floor barracks, and Kenny had changed into civilian clothes. The place was littered with carts, trash piles in the orderly room, name tags falling off the room doors. Kenny didn’t need a uniform to command attention. When he saw the cadets left in charge of quarters, he told them what he thought of the place. On the way out, laundry bundles were piled high in the sally ports. Order, cleanliness, personal discipline are basic skills of the soldier. Every year grads complain that “The Corps has gone to Hell” or simply the “Corps Has.” 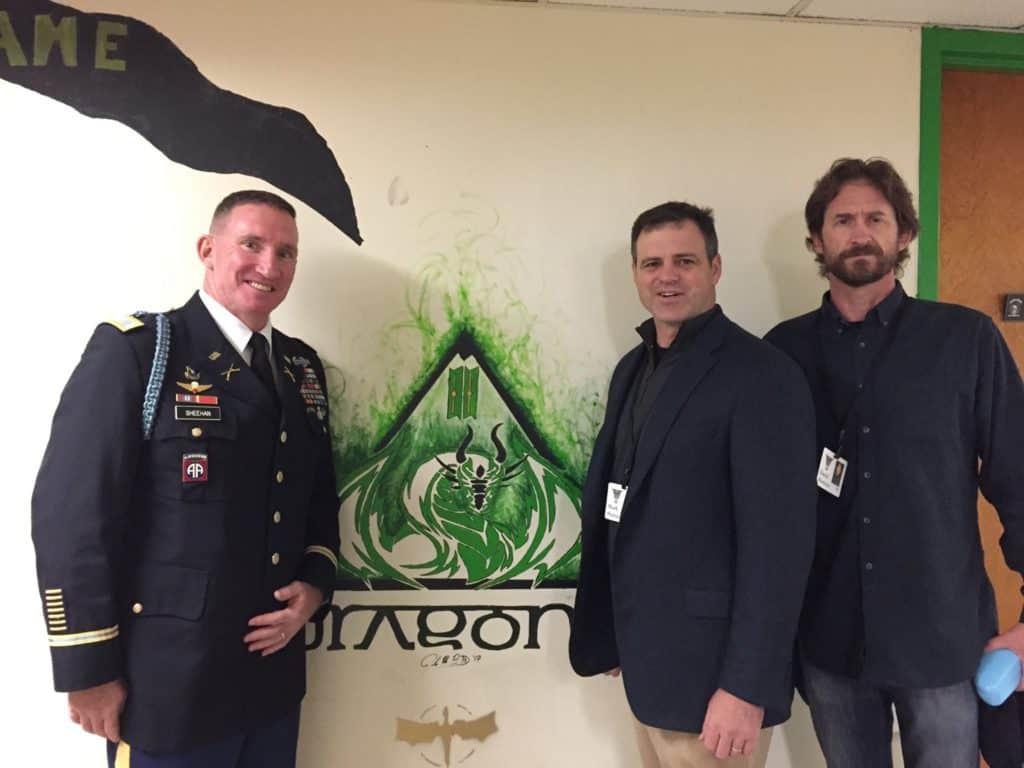 “They asked me to speak to the team today,” Colleen said. I peeked at her smart phone as she reviewed her notes. Seated on my other side Anthony glanced at messages while we listened to the Superintendent’s brief.

Colleen was an intelligence officer who is now a nurse in real life and the reserves. She works at the VA [veterans affairs hospital] and the “CASH,” or CSH, which refers to Combat Surgical Hospital, the successor to MASH [Mobile Army Surgical Hospital].

Anthony played to glory on the grid iron, a key man on an Army bowl team. He left the army to do other things: he’s currently the Chief Operating Officer at Twitter, while Colleen was just inducted into the Army Hall of Fame for her illustrious swimming career. 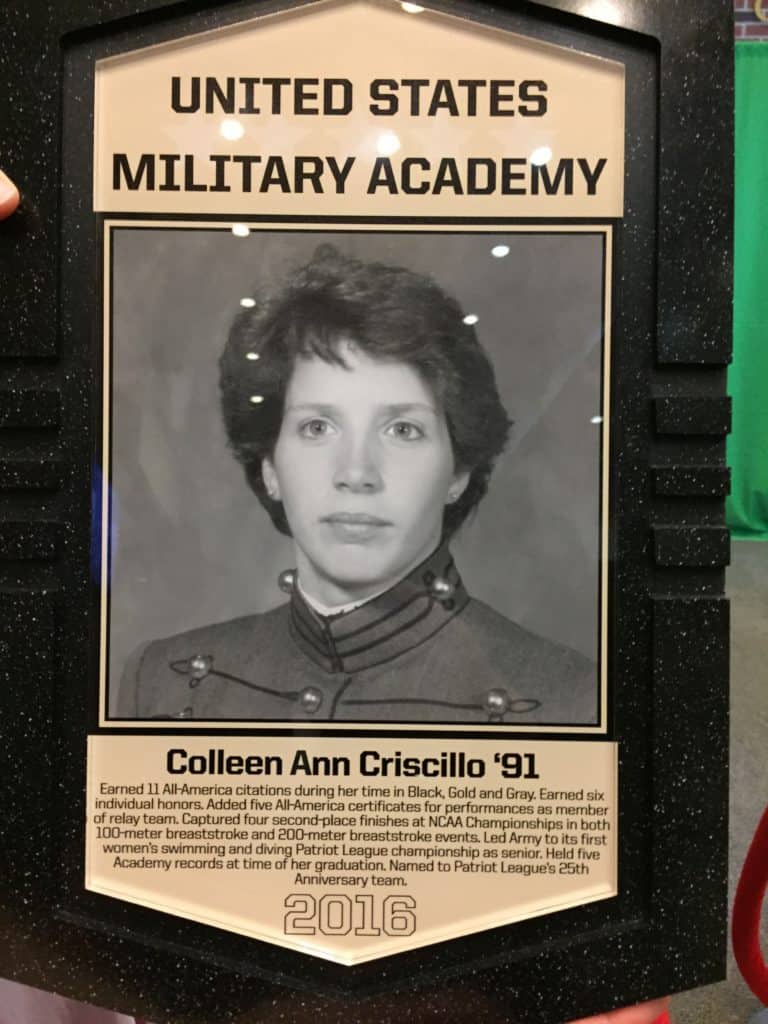 “What’s it like in the army, will I be ready?” Mike asked, a yearling [sophomore] from Dave’s home town. After the tailgate, we met Mike at Grant Hall for a pep talk. We didn’t know him, but Dave invited us to come along, an opportunity for the professional development of a young cadet. So Scott, Mark and I sat down with Mike and Dave, TVs blaring in the background, cadets buying snacks, on break from the regimen.

An aviator, artilleryman, infantryman, and adjutant, we provided this young man with no end of advice, on his first unit to barracks life to moral decisions and general life counsel.

“Hey! It’s four on one and the kid needs a break,” I said. Mike couldn’t hide his smile, he was eating it up. His eyes glistened and his forearms bulged as he grasped his hands together on the table. It was all ahead of him.

I’ve thought a lot about this visit to my Alma Mater, the veterans, cadets, classmates, many of whom I haven’t seen in 25 years.

Billy, Manny, Monique, TJ, Kenny and his multiple combat tours, the casualty rate in his unit among the highest in the army, Colleen, Anthony, the class memorial service at the cadet chapel, the lone bugler playing taps, each name read aloud, 25 names, 25 years.

We made it through four years together, we joined something bigger than ourselves, served a greater good. Though our paths diverged, taking us to different places and different careers, that will never change.

Manny spoke with his son about being late and our mad dash to make it, how we waited for them, even knowing that we might miss the review. He said his son learned a lesson, that you never leave a man behind. 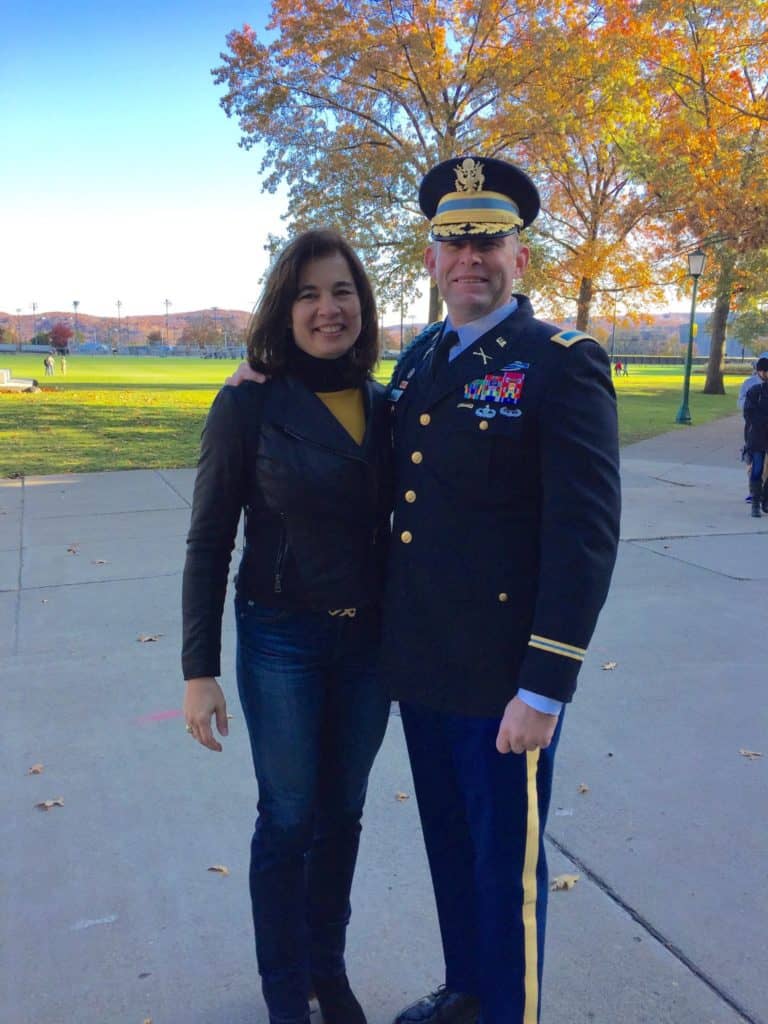 A photo of Kenny and me after the parade