The College Essay & the Shameless I – “I enjoy urban hang gliding.” 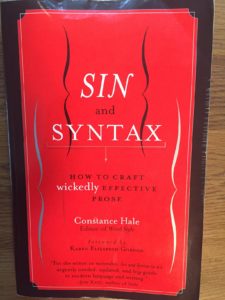 Sin and Syntax, How to Craft Wickedly Effective Prose by Constance Hale

If you haven’t encountered the college essay in a while, you’re in for treat.  I first came across this example in Constance Hale’s Sin & Syntax, How to Craft Wickedly Effective Prose, not your normal book on writing, but a lusciously fun approach to the bones, flesh, sins and pleasures of language.  Hale, editor of Wired Style, included the essay in its entirety under Carnal Pleasures for pronouns.  Here’s what she shared.

. . . In a piece titled “College Application Essay,” which appeared first in Literary Cavalcade, then in Harper’s, and has since circled and recycled the world on the Internet, Hugh Gallagher takes the notion of the first-person-singular point of view to outlandish lengths. Parodying the shameless self-promotion often on display in admissions essays (and, later in life, in resume cover letters), Gallagher uses I to make fun of an entire genre of nonfiction writing.

3A. ESSAY: IN ORDER FOR THE ADMISSIONS STAFF OF OUR COLLEGE TO GET TO KNOW YOU, THE APPLICANT, BETTER, WE ASK THAT YOU ANSWER THE FOLLOWING QUESTION:

ARE THERE ANY SIGNIFICANT EXPERIENCES YOU HAVE HAD, OR ACCOMPLISHMENTS YOU HAVE REALIZED, THAT HAVE HELPED TO DEFINE YOU AS A PERSON?

I am a dynamic figure, often seen scaling walls and crushing ice. I have been known to remodel train stations on my lunch breaks, making them more efficient in the area of heat retention. I translate ethnic slurs for Cuban refugees, I write award-winning operas, I manage time efficiently. Occasionally, I tread water for three days in a row.

I woo women with my sensuous and godlike trombone playing, I can pilot bicycles up severe inclines with unflagging speed, and I cook Thirty-Minute Brownies in twenty minutes. I am an expert in stucco, a veteran in love, and an outlaw in Peru.

Using only a hoe and a large glass of water, I once single-handedly defended a small village in the Amazon Basin from a horde of ferocious army ants. I play bluegrass cello, I was scouted by the Mets, I am the subject of numerous documentaries. When I’m bored, I build large suspension bridges in my yard. I enjoy urban hang gliding. On Wednesdays, after school, I repair electrical appliances free of charge.

I am an abstract artist, a concrete analyst, and a ruthless bookie. Critics worldwide swoon over my original line of corduroy evening wear. I don’t perspire. I am a private citizen, yet I receive fan mail. I have been caller number nine and have won the weekend passes. Last summer I toured New Jersey with a traveling centrifugal-force demonstration. I bat .400. My deft floral arrangements have earned me fame in international botany circles. Children trust me.

I can hurl tennis rackets at small moving objects with deadly accuracy. I once read Paradise Lost, Moby Dick, and David Copperfield in one day and still had time to refurbish an entire dining room that evening. I know the exact location of every food item in the supermarket. I have performed several covert operations for the CIA. I sleep once a week; when I do sleep, I sleep in a chair. While on vacation in Canada, I successfully negotiated with a group of terrorists who had seized a small bakery. The laws of physics do not apply to me.

I balance, I weave, I dodge, I frolic, and my bills are all paid. On weekends, to let off steam, I participate in full-contact origami. Years ago I discovered the meaning of life but forgot to write it down. I have made extraordinary four course meals using only a mouli and a toaster oven. I breed prizewinning clams. I have won bullfights in San Juan, cliff-diving competitions in Sri Lanka, and spelling bees at the Kremlin. I have played Hamlet, I have performed open-heart surgery, and I have spoken with Elvis.

But I have not yet gone to college.

I read this aloud to my oldest daughter who is now applying to college. This is her generation, I explained.

“Do you see any resemblance?”