On Riddles & Language – A Cabinet of Curiosities by Roy Sorensen 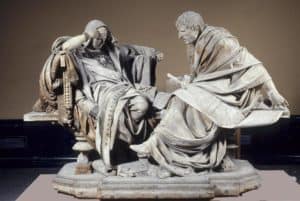 Assassination Proof? As Nero became more powerful there appeared to be no limit on who he me could eliminate — even his mother. His philosophy teacher, Seneca, warned Nero that there was someone he could not kill. Who was it? (Sorensen)

This riddle felt appropriate given the current political climate with upcoming elections. Fortunately, or unfortunately depending on your point of view, “democracy is the worst form of government, except for all the others.” (Churchill) Here are a few more to keep your wits about you and to entertain your friends. [Answers are at end of letter.]

Indiscernible Pills   Each day you must take an A pill and a B pill. After you tap an A pill into your palm you inadvertently tap two B pills in your hand. The A and B pills are indistinguishable. The pills are expensive and you must not overdose. Can you still use the pills you have mixed up?

I think about the seniors I know who have multiple medications and the times when I’ve confused pills myself, and I thought this might be actually helpful. Yes, there is a solution.

There would be no temptation to answer them because the language would prevent you from asking them. To a limited extent, written English silences pseudo-questions.In oral lectures, I illustrate this prophylactic punctuation with puzzle sentences devised by Richard Lederer and Gary Hillock.

* These riddles from A Cabinet of Philosophical Curiosities: A Collection of Puzzles, Oddities, Riddles and Dilemmas by Roy Sorensen.

Assassination proof – Nero’s successor. The next emperor was Galba. But Seneca was not claiming that Galba could not be killed. Galba only avoided Nero’s intention to kill him by good fortune. Seneca was making a logical point: “However many you put to death, you will never kill your successor.” Seneca was correct. Before Nero was succeeded, however, he succeeded in arranging Seneca’s death.

Pills — Add a second pill from the A bottle. Cut each of the four pills in half. take the left halves of each pill. That will be equivalent to taking 1 A pill and 1 B pill. Tomorrow, consume the remaining halves. Return to your normal regime.

Capital Pronunciation One such language is English. Here is a demonstration, ‘Job’s Job’, by an unknown poet:

In August, an august patriarch

Was reading an ad in Reading, Mass.

To polish piles of Polish brass.

I suspect the poet is from North America because his second example, ‘Herb’s Herbs’, does not work with the British pronunciation of ‘herb’:

Moved to a rainier Mount Rainier.

It would have been so nice in Nice.

And even tangier in Tangier.

The period shows that sentence is a declarative sentence rather than a question. Written English forces quotation marks that clarify whether a word is bring mentioned rather than used. Commas indicate word groupings.

Punctuation marks have been introduced piecemeal over centuries. Plato preferred oral philosophy over written philosophy. One reason is that the written Greek of his era lacks modern punctuation such as separating words with spaces.

(All excerpts from Sorensen)