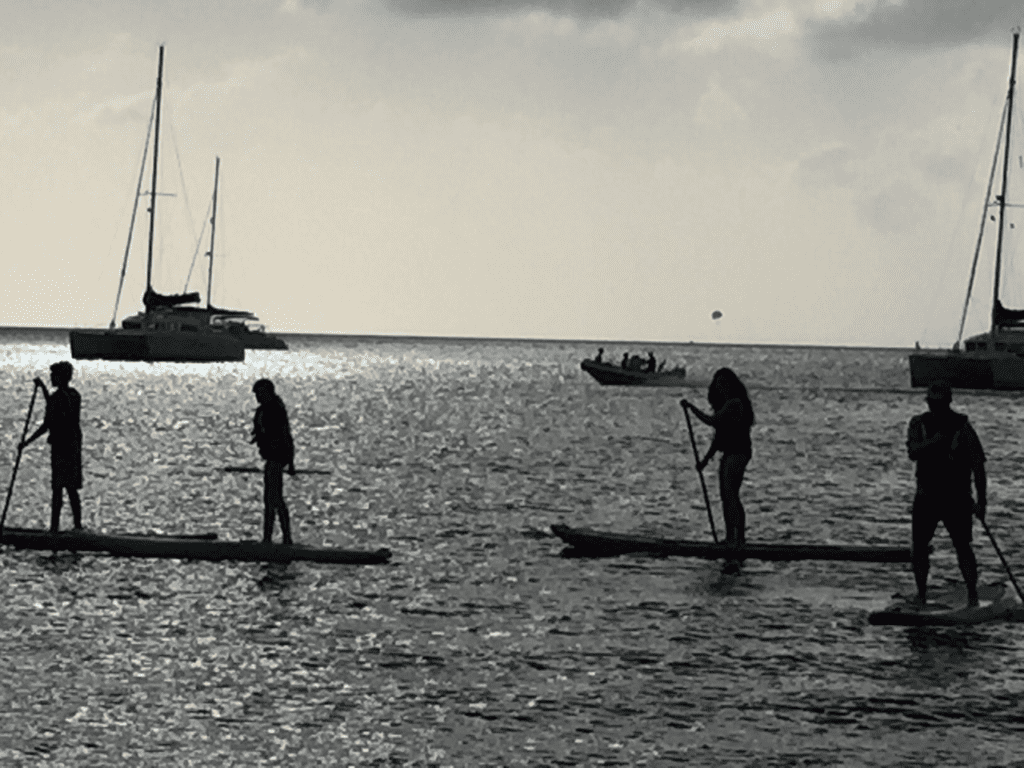 As we return from warmer climes, wintry adventures, distant family, geographical and emotional rambling, we find ourselves back in our homes and at our desks. Here are some random thoughts.

2016 is an election year and a leap year, evenly divisible by 4, which means politicians and debates, summer Olympics in Rio de Janeiro, AND an extra day on February 29 to synchronize the calendar year with the astronomical year. Years with 365 days are called common years.

Europe and Russia will launch the ExoMars Trace Gas Orbiter on a mission to Mars this March 14th. I just read The Martian, and space and Mars are particularly fascinating.  Here’s a book well worth your time, especially for hard core Sci Fi fans, a modern day Robinson Crusoe in space, but better. 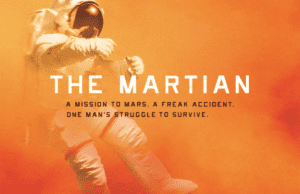 The roman numerals MMXVI represent 2 mille (Latin for thousand), an X for ten, a V for five, and an I for one; 2000 + 10 + 5 + 1.  The X, V, and I are believed to designate hatches or tallies on a stick; when reaching five, two were used in the shape of V and when reaching ten, two were crossed in an X.

With the first full moon on Christmas in 25 years, we have passed the winter solstice and the days are getting lighter and longer, fully 59 more minutes of light today in New England since the darkest day of the year on 22 December, an hour in just 16 days. Ancient peoples charted their lives by the sun and this time of year was cause for celebration since before Christ was born.

The year 2016 AD refers to Anno Domini or in the year of the Lord, and politically correct usage of 2016 CE refers to the Common Era so as not to offend. Jewish academics began use of this reference mid 19th century but CE goes back hundreds of years. Despite current usage, the expression was used interchangeably as Common Era and Christian Era. Non-Christians may feel better using CE, but its reference remains the same. 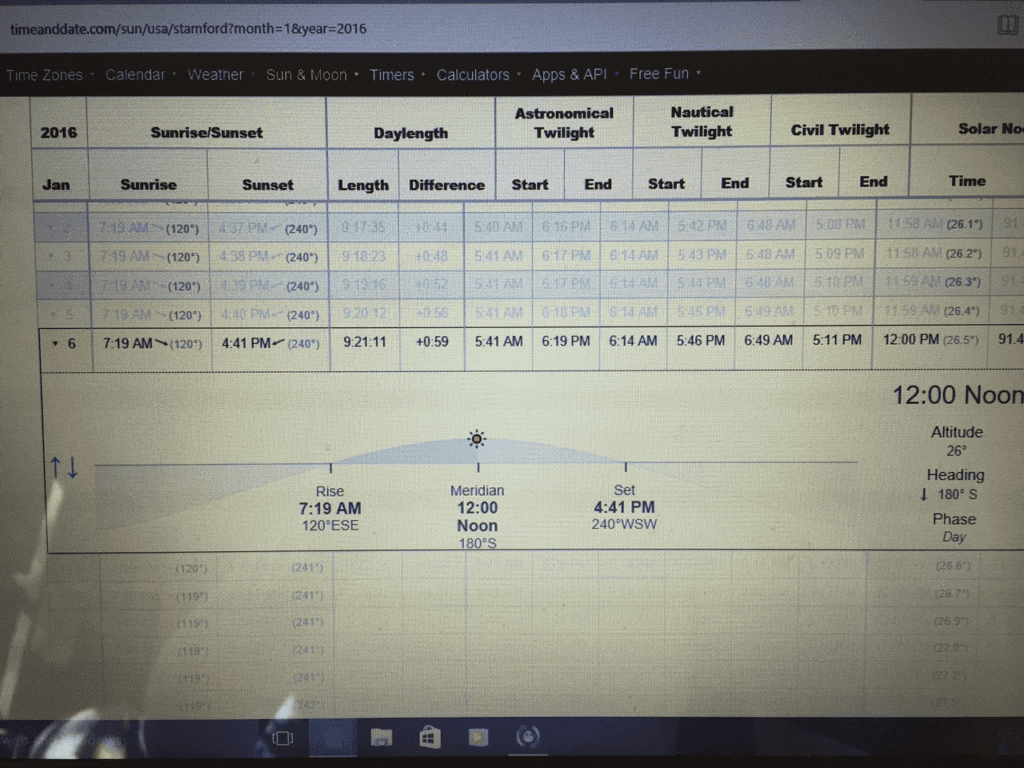 The Lunar New Year is February 8, 2016 and this year the zodiac symbol is the Fire Monkey. I’m hoping for a good year because I was born in the year of the Monkey under the Earth symbol. There are five symbols: metal, water, wood, fire, and earth. The 12 zodiac animal signs combined with the five symbols repeats every 60 years.  In China, the lifting of the one child policy has caused a craze for the new postage stamp with a cartoon monkey being kissed by two baby monkeys. January 1 this year, couples are allowed to have two children, and that makes me appreciate the freedoms we enjoy here, especially in the case of my third child. She’s not a monkey, but she does like to monkey around. 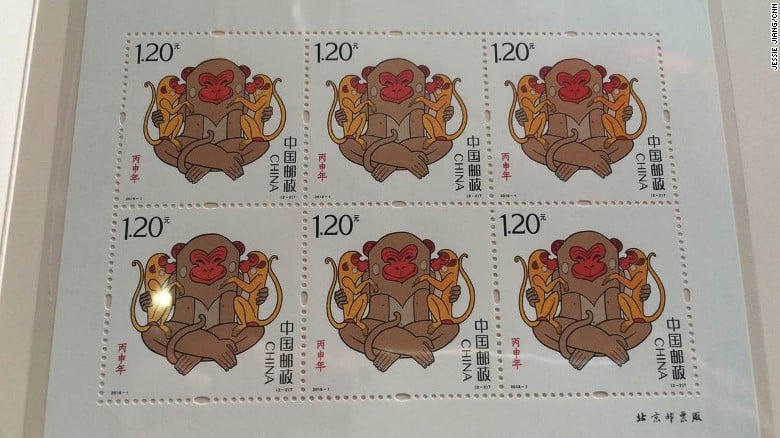 Renowned Chinese artist Huang Yongyu designed the stamp with two baby monkeys to signify the end of the One Child Policy.

Our family visited Nebraska this December for the first time and watched the NCAA D1 national women’s volleyball championships wth 17,000 others in a record crowd, cloaked in red, with a slip of orange for Texas fans. Nebraska captured its fourth national title in a three set sweep. We sat rows from the back wall, sandwiched between very tall and very large husker fans, corn hats, and corn shirts It brought new meaning to the sport of volleyball when folks at our seat altitude stretched their arms above their heads, flipped their hands down at the wrists, and belted out “Roof! Roof!” when the huskers blocked an attack.  These were educated volleyball spectators. 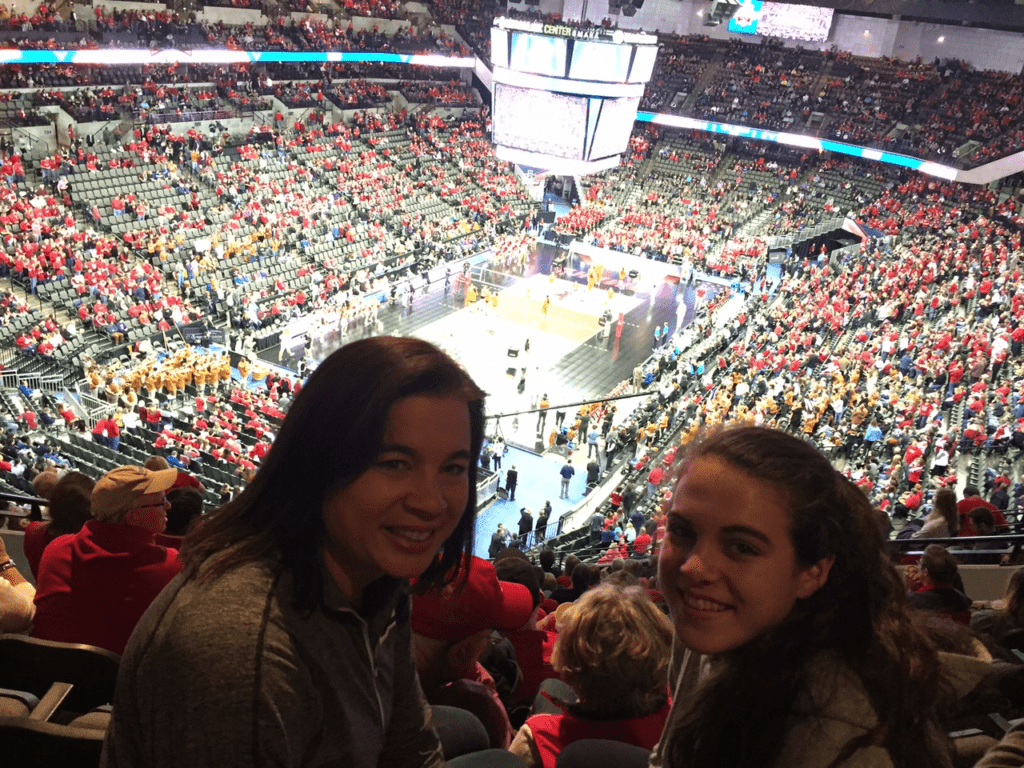 The visit gave me perspective on geography. At the food vendor, a woman asked if I knew what type of pepper was on the Chicago Hot Dogs, so I asked the cashier who was just as clueless. Then the same woman widened her eyes and commented on the sky high price of $6 for a hot dog.  I told her they charged more than twice that to cross the GW bridge into Manhattan.

“This is a deal for me,” I told her. Breakfast in the burbs of NYC, even an hour north, cost multiples of that meal.  I smiled at my relative fortune.  “Go West!”

We tried to discover the meaning behind Peyton Manning’s infamous, “Omaha! Omaha!”  The closest I got besides T-shirts at the airport, was straddling the Nebraska Iowa state line on the $44 million dollar walk bridge across the Missouri River.  The skyline looked lovely from the middle of the not-so-wide Missouri. I was not inclined to scream “Omaha” though I did admire the view, the S shaped curve of the suspension bridge, and the rush of the current below the crisp air. It was unseasonably warm. That is, still in double digits. 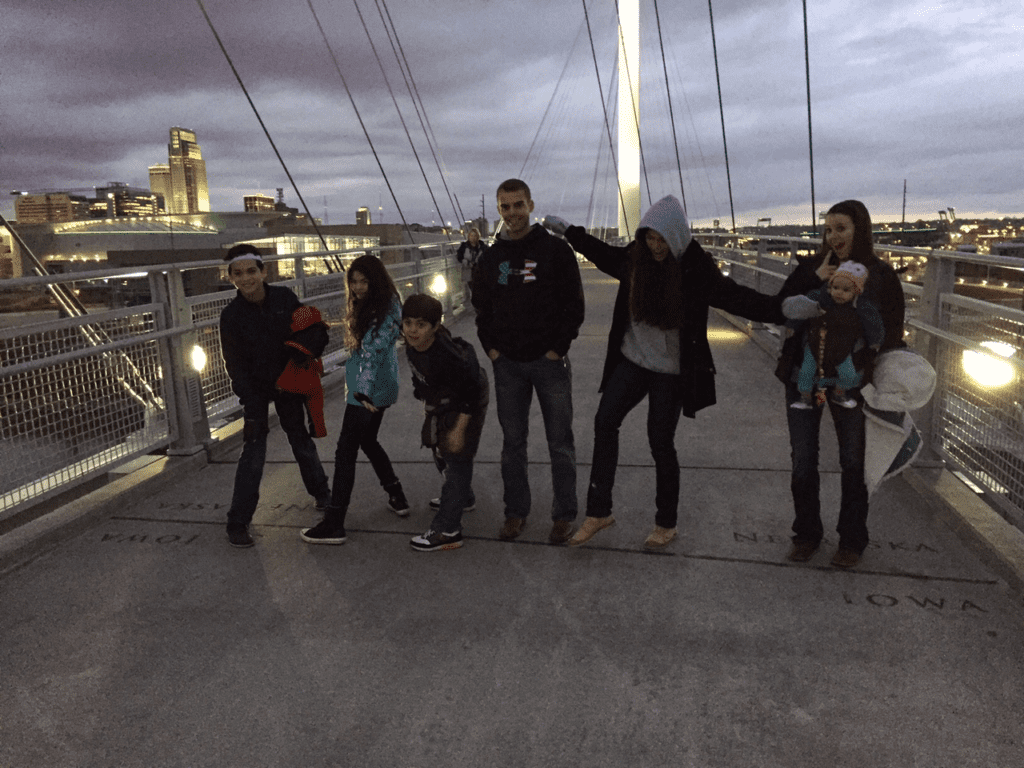 The Shattans straddle the Nebraska Iowa state line. Visiting Kansas and Oklahoma family was the best part of the trip!

I pointed to the employee’s bare legs when we returned our rental car at Alamo, shivering in my winter jacket.

“So you’re used to this weather,” I said to him.

“They’re my winter shorts,” he replied.  It was 29 degrees without the wind chill factor.

At Omaha’s Eppley Airfield, the Hudson News cashier informed me:

I switched them and thanked her. The airport was clean, organized, and well engineered, unlike JFK, which reminds me of a third world, work site aviary (there are birds in the terminals), but that may be unfair to some foreign airports.

JFK reminds me of our next trip. Opting against our not-so-wintry skiing last year with temperatures reaching into the 50s, we booked a direct flight to St. Lucia to bathe our pasty New England skin in the sun.  The volcanic island boasts two postcard perfect mountains called pitons and beer of the same name. We flew by helicopter across 90 acres of marijuana infested rain forest to Castries in the north, passing harrowingly close to the undulating  terrain, peaks jutting up and out towards our small chopper.  The view of the jagged coastline and teal colored sea was spectacular and I recommend the 10 minute trip to tourists who wish to skip the two hour gut-wrenching van ride along switchback roads of varying altitudes at the mercy of a local driver in a hurry, as long as you don’t mind spending a small fortune on hiring a chopper pilot. Just sayin. 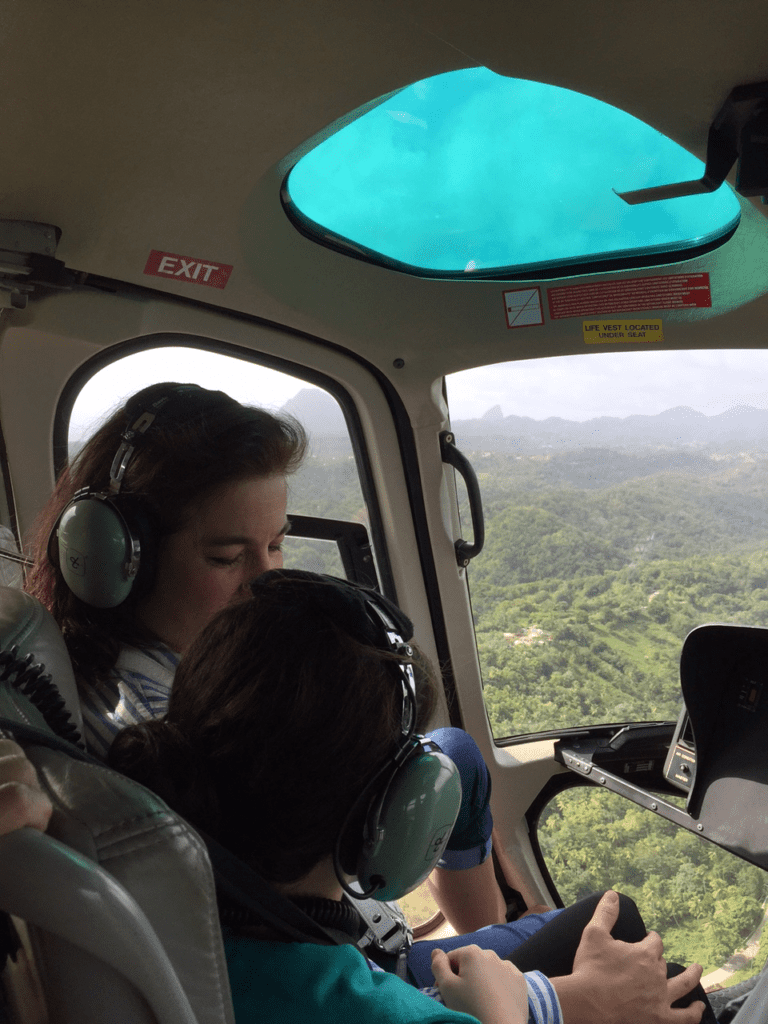 St. Lucia Helicopter transfer from airport to Castries in the north, $150 per person. Family loved this adventure!

We settled into The Landings on Rodney Bay where island time required adjustment for “type A” Americans from the northeast. The resort printed a program with themed buffets, morning yoga, and a New Year’s Gala.  My daughter brought her own ball, so we were pleased to see daily volleyball on the beach.  Let’s be generous and say that the players could not hold a conversation with the huskers: roof here meant red clay tiles or a locale for cocktails. I shared with my teen the relative merits of Jungle Ball, that setting up the second hit for her 3 person beach team would in all likelihood result in a shuttle run, as in running back and forth for the missed ball instead of winning a point. I served underhand (AKA easily, as opposed to overhand floaters or jumpserve top spin which I can’t do anyway) and made several service runs amid the silent glare of our opponents, making me feel like a callous predator.

Enjoy this 366 day orbit around the sun, in this 16th year of the third millennium.